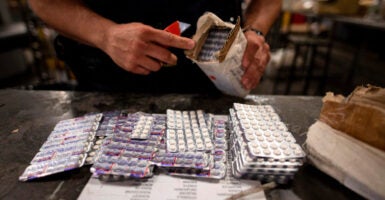 A U.S. Customs and Border Protection officer discovers oxycodone pills in a parcel at John F. Kennedy Airport's U.S. Postal Service facility on June 24, 2019, in New York. In a windowless hangar at the airport, dozens of law enforcement officers sift through packages, looking for fentanyl—much of it from China—a drug that is killing Americans every day. (Photo: Johannes Eisele/ AFP/Getty Images) 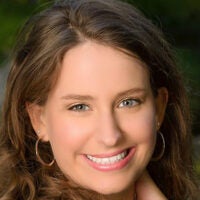 Carolyn Moorman is an intern in the Center for Technology Policy at The Heritage Foundation.

The historic number of U.S. deaths from drug overdoses in 2020 is yet another shocking consequence that stems from the Chinese Communist Party’s negligence, deception, and known export of poison to the United States.

China dominates the supply of fentanyl, other synthetic opioids, and their precursors to the U.S. These are the drugs that resulted in the increase in 2020 drug deaths.

Another key factor contributing to last year’s overdoses was human isolation due to lockdowns imposed to prevent the spread of the COVID-19 virus, which originated in China.

To save American lives and families from such devastating consequences, the Biden administration must change its current open border policies and begin enforcing immigration and drug laws.

The abrupt end to the Trump administration’s numerous effective immigration policies, such as the “Remain in Mexico” program, has undoubtedly led to the rise in illegal migration and drugs on the U.S-Mexican border.

Almost 189,000 people arrived at the U.S-Mexican border in June, the fifth consecutive monthly increase since President Joe Biden took office and the highest monthly total in more than 20 years.

Those benefiting the most from the rescinding of these immigration enforcement policies are the Mexican cartels, who have used this opportunity of increased migration to make appalling amounts of money—sometimes up to $14 million a day for smuggling people, including unaccompanied children, across the border.

These migrants are serving as distractions and even glorified pack mules to smuggle thousands of pounds of drugs, including cocaine, heroin, and fentanyl, into the country.

Fentanyl deaths are an American crisis due to the drug’s lethality in small doses and the fact that it is commonly taken with other opioids unknowingly.

The drug crisis is inextricably intertwined with the border migrant crisis because border agents are unable to catch many of the illegal drugs entering the U.S. as they tend to the sheer volumes of migrants illegally crossing our border.

The insufficient news coverage of the abundance of drugs flowing into the country due to Biden’s immigration policies is a gross disservice to the American people by a biased American media.

Making the difficult situation worse is the significant involvement of Chinese nationals and criminal organizations with the Mexican cartels. This involvement includes money laundering and the sending of drugs, technology, and chemicals to Mexico.

China has not put in place controls on the precursor ingredients of fentanyl and shows little interest in doing so.

In addition, the Chinese government has placed monthly limits on the amount of money Chinese citizens living abroad can withdraw from their Chinese bank accounts. That may have encouraged some Chinese citizens to work with the cartels to launder money in the U.S, such as Xueyong Wu, who pleaded guilty to such a crime in June.

It’s exceedingly cheap to produce fentanyl in China, so it’s no surprise that Mexican cartels remain the largest black market customers of these Chinese-made precursor chemicals.

While the U.S government remains steadfast in its position that the Chinese and Mexican governments do their parts to hold these criminals accountable, Wesley Tabor, a retired assistant special agent in charge with the Drug Enforcement Administration’s Los Angeles office, thinks differently.

According to Tabor, both countries appear to make solid efforts on this front to save face, but also have corrupt governments that are known to make money in questionable ways.

Considering how far China will go to compete with the U.S for global power, the U.S. should examine and combat any Chinese role in this drug devastation currently afflicting too many American families.

While the Biden administration has lowered the intensity of the rhetoric, it still seems to be committed to countering the threat of China. In his State of the Union speech, Biden stated, “We’re in competition with China and other countries to win the 21st century.”

He seems especially committed to standing up to China’s reprehensible treatment of the Uighur minority, abuses in Hong Kong, and threats to Taiwan. But standing up to China includes examining the responsibility of the Chinese government for the persistence of the illegal drug trade and more law enforcement by the Biden administration at the border.

How can the U.S continue to consider itself a powerful leader if it cannot—and will not—limit the illegal immigration and poisonous substances crossing its borders?

China is willing to challenge American dominance in all spheres of influence (political, economic, technological, etc.), and it’s imperative that U.S. resources be prioritized on all fronts of this competition. American lives depend on it.