Author Testifies That China Fails to Crack Down on Fentanyl 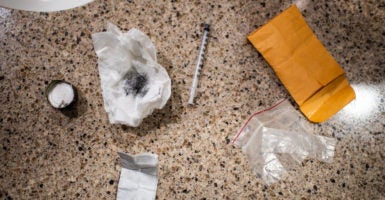 “Quietly, money has gone to Chinese companies exporting deadly drugs that are killing tens of thousands of Americans annually,” investigative journalist Ben Westhoff tells a congressionally created panel. Pictured: A kit sits on a sink in a Walmart restroom in Manchester, New Hampshire, as police on Feb. 10 question a woman who was preparing to shoot up heroin and fentanyl. (Photo: Salwan Georges/The Washington Post/Getty Images)

Westhoff is the author of the new book “Fentanyl, Inc.: How Rogue Chemists Are Creating the Deadliest Wave of the Opioid Epidemic,” which brings to light China’s production of drugs known as novel psychoactive substances, most notably fentanyl.

Westhoff said fentanyl was primarily used as a medical drug, but now finds its greatest use illicitly. Fentanyl used as a drug is mostly made in China, then directly sent to U.S. consumers through the mail or funneled across the southern border by Mexican drug cartels.

“China has not been acting in good faith,” Westhoff said during the July 31 hearing. “Most companies produce legitimate chemicals, some produce illegal, others are in-between. Reforms have been promised, but inspections remain sporadic.”

“China’s clumsy understaffed bureaucracy, involving at least eight different agencies, has a difficult time controlling these chemical industries,” he said. “Thus, dodgy companies that keep their heads down can operate without problems.”

Westhoff acknowledged that many Chinese officials do not fully understand laws governing these chemical companies. As a result, many companies manipulate gray areas in the law to their advantage and operate under the radar to avoid governmental oversight.

“Quietly, money has gone to Chinese companies exporting deadly drugs that are killing tens of thousands of Americans annually,” Westhoff said. “For example, China designates certain companies as ‘new and high technology enterprises,’ which helps these companies, including those exporting dangerous drugs to the U.S., receive lucrative incentives.”

The most significant action taken by China to stem the flow of illicit systemic opioids occurred April 1, when government officials announced a regulation on all variants and precursor chemicals used to make fentanyl and its analogues.

Despite this, Westhoff said there is much more the United States can do. He recommended that American officials pressure China to eliminate tax rebates, grants, precursors, and incentives that incentivize companies to produce and export deadly opioids.

In other testimony, Rosemary Gibson, author of “China Rx: Exposing the Risks of America’s Dependence on China for Medicine,” warned of China’s alarming control over the global pharmaceutical market.

Gibson revealed that China is responsible for producing 80% of America’s generic drug supply, which are 90% of the medicines that Americans typically use. By comparison, she said, America’s industrial base that used to manufacture drugs is collapsing and will completely collapse in five years, while other developed countries like India and the Netherlands depend almost exclusively on China for medicines.

Gibson likened China’s dominance in the global pharmaceutical industry to its predatory trade practices, as evident when a number of Chinese companies dumped penicillin into the global markets at a lowered price. After driving out all of the American, European, and Indian producers, the Chinese companies raised prices for penicillin once again, establishing monopoly control.

The most alarming fact that Gibson discovered in her three years of research was that it is no one’s job in the federal government to supervise what is in America’s drugs.

To counteract China’s growing control over pharmaceuticals, Gibson suggested a government review to detect America’s vulnerabilities and discover how to rebuild its industrial base. Gibson also suggested that officials in the Defense Department and the Department of Veterans Affairs stop purchasing the cheapest pharmaceuticals from China, and instead purchase the best value medicines.

Stone Washington, a recent graduate of Clemson University in South Carolina, is a contributor to The Daily Caller News Foundation.