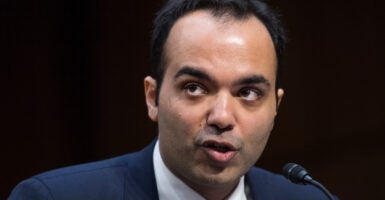 Rohit Chopra—seen here at his Senate committee confirmation hearing Feb. 14, 2018, to serve at the Federal Trade Commission—has been nominated to head the Consumer Financial Protection Bureau. But his refusal to answer questions from Republican senators has put the nomination in some jeopardy. (Photo: Tom Williams/CQ Roll Call/Getty Images)

After his March 2 Senate committee confirmation hearing, Rohit Chopra appeared to have a “reasonably assured path forward” to becoming the next director of the Consumer Financial Protection Bureau. Suddenly, however, Chopra’s prospects look a bit different.

As Government Executive reports, several current and former employees of the bureau allege that the Biden administration is flouting civil service protections.

Specifically, they claim that the administration has offered separation incentives, including early retirement, and launched investigations into career senior executives to sideline them, targeting about a half-dozen of the highest-ranked nonpolitical staffers at the bureau.

At the very least, this approach is questionable because of civil service rules that exist to protect career employees from politically motivated personnel decisions.

The tactic is also disingenuous because President Joe Biden promised that his administration would not interfere with career employees in that way.

More importantly for Chopra, though, is that thus far he has refused to respond to a congressional request—sent June 17—that seeks to determine whether he knew anything about the alleged mistreatment of Consumer Financial Protection Bureau employees.

In fact, Chopra has even refused to explain whether he intends to respond to the request.

That sort of silence seems rather odd, especially because it would be simple for Chopra to reply if he had no knowledge of the alleged abuses. At the very least, Chopra’s refusal creates the appearance that he does not want any details to come to light.

But given his nomination to head the bureau, Congress cannot possibly tolerate his silence.

Republicans on the Senate Banking, Housing, and Urban Affairs Committee sent a follow-up letter July 13 pointing out what should be the obvious:

Any individual nominated to lead a federal agency should be expected to provide truthful and clear answers to fair and basic questions from Congress.

Any nominee who refuses to do so during their nomination has not earned the right to be confirmed.

Indeed, if you are refusing even to respond to congressional inquiries while your nomination is pending before the Senate, there is little doubt about how you will treat such inquiries if confirmed.

Removing career employees and replacing them with political activists is a serious allegation for any administration. The Biden administration owes the American public an explanation.