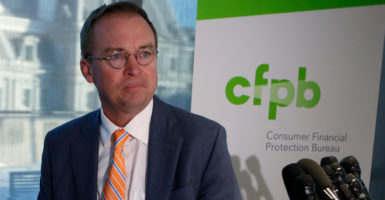 Office of Management and Budget Director Mick Mulvaney arrives to speak to reporters at the offices of the Consumer Financial Protection Bureau, where he began work earlier Monday after being named acting director by President Donald Trump. (Photo: Joshua Roberts/Reuters/Newscom)

A new director, short or long term, won’t be enough to address accountability problems at the federal Consumer Financial Protection Bureau, critics said as a legal fight broke out over who will run the agency with the departure of its first leader.

“The agency should be professional, not political,” @ronaldLrubin says.

Still, Cordray’s hand-picked successor, Leandra English, who served as his chief of staff, sued Sunday to block the Mulvaney appointment.

“Rumors that I’m going to set the place on fire or blow it up or lock the doors are completely false. I’m a member of the executive branch of government,” Mulvaney said at a press conference Monday.

Mulvaney, when serving as a congressman from South Carolina on the House Financial Services Committee, called the Consumer Financial Protection Bureau a “joke.” Other Republicans, including Trump, have been sharply critical of the agency.

“The Trump administration can’t eliminate the CFPB, but it can stop it from being a rogue agency,” Ronald L. Rubin, a former enforcement attorney there who has advised the Financial Services Committee on regulatory policy, told The Daily Signal.

Mulvaney is unlikely to be in the director position for the long term. Names mentioned as a Trump nominee include Jeb Hensarling, R-Texas, current chairman of the Financial Services Committee; former Rep. Randy Neugebauer, R-Texas; Keith Noreika, acting comptroller of currency at the Treasury Department; and Jared Sawyer, a deputy assistant secretary at Treasury.

“A new director can create procedures to make the bureau more transparent,” Rubin said. “It would be hard for his successor to go back to operating in secret, like the last six years.”

Rubin has been highly critical of the agency since leaving it, writing several op-eds highlighting problems there.

“The most important fix is personnel. Right now, almost all the employees are Democrats,” Rubin added. “The agency should be professional, not political, which means the staff should include something like a representative proportion of Republicans.”

Conservatives’ long-standing critique of the agency is its lack of accountability as it makes and enforces rules governing banks, credit unions,  securities firms, mortgage companies, and other financial institutions with little oversight from the legislative or executive branches. The agency has more than 1,600 employees and a budget topping $605 million.

Created by the Dodd-Frank Act in 2010, the second year of Barack Obama’s presidency, the Consumer Financial Protection Bureau is an independent agency with guaranteed funding through the Federal Reserve.

“We intend to execute the laws of the United States, including the provisions of Dodd-Frank that govern the CFPB,” Mulvaney told reporters.

Democrats pushed the new agency as a response to the 2008 financial crisis, brought on after banks issued irresponsible loans. However, Republicans contend the agency has too much independence from elected officials, and abuses its unchecked powers.

The director of the agency is subject to presidential nomination and Senate confirmation, but the president may fire the director only for cause.

A panel of federal judges on the District of Columbia Circuit Court of Appeals held in October 2016 that the agency’s leadership structure was unconstitutional. The agency has appealed to the full court.

“As acting director, Mulvaney can begin to roll back the CFPB’s unlawful regulations and abusive enforcement actions,” Gray said in a public statement. “But he cannot solve the underlying problem of the agency’s unconstitutional structure, which makes it unaccountable to oversight by the president or Congress, a set of issues which are currently in litigation.”

In June, the House passed legislation to significantly weaken the agency by taking away rulemaking authority and turning it into an enforcement-only body. (The bill was called the CHOICE Act, the acronym standing for Creating Hope and Opportunity for Investors, Consumers, and Entrepreneurs.)

White House press secretary Sarah Huckabee Sanders declined Monday to talk about the House bill, or to support new reforms. But Sanders did say the agency would move in a different direction under Mulvaney, who remains fulltime director of the Office of Management and Budget while in the interim role at the consumer agency.

“This is Director Mulvaney’s first day,” Sanders told The Daily Signal during a press briefing at the White House. “We’ll let him get settled in before we start announcing new policies.”

Sanders later added: “I think consumers should be glad that they finally have somebody in there that actually wants to fight for consumers and not fight for their political ambitions like we’ve seen in previous leadership, which will be a very different change under Director Mulvaney.”

Rubin says it’s very doubtful Mulvaney would leave his post as budget director to take the post at the consumer agency full time.

The agency’s move to litigate who its acting director would be hardly dispells the notion of a rogue agency, Rubin said.

“This lawsuit speaks volumes about how Democrats view the CFPB—they think they own it,” he said, adding:

President Trump has been in office for a year. He didn’t fire the director, he waited until he resigned, but Democrats are still trying to control the agency. I’ve never seen anything so outrageous in government.

Replacing the “strong director” system at the CFPB with an appointed commission—similar to the Security and Exchange Commission or the Federal Election Commission—has been considered as a reform, said Norbert Michel, director of the Center for Data Analysis at The Heritage Foundation.

However, both this idea and that of turning the Consumer Financial Protection Bureau into an enforcement-only body are nonstarters among Democrats such as Sen. Elizabeth Warren of Massachusetts, who was a key proponent of the agency, Michel said.

Changes to an agency created by Congress will require congressional action, Michel said. He said lawmakers should use the Congressional Review Act to reverse the agency’s payday lending rule, which Cordray pushed through just before leaving.

Another adverse court ruling on the constitutionality of the agency’s structure could force the Senate to take up the House-passed bill, if Democrats see this as an avenue for keeping the agency, he said.

“Right now we say it’s doing well or doing poorly—depending on your perspective—depending on what the director does, and that needs to change,” Michel told The Daily Signal. “A new director is not going to fix that. Even a full-time director can’t just get rid of previous actions.”