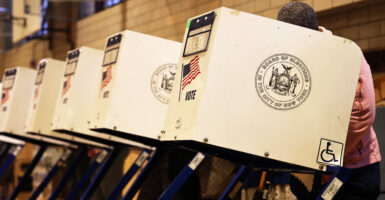 Residents of New York City vote on primary election day on June 22 in the Flatbush neighborhood of Brooklyn. This was the first year in the city for ranked-choice voting, which allows voters to rank up to their top five candidates in a given race. (Photo: Michael M. Santiago/ Getty Images)

More than a week later, however, the nation’s biggest city has been cast into confusion and heated debate over whether the use of a new process that allows voters to rank their preferences for up to five candidates (used only in party primary elections) was a smart decision.

Under New York City’s system—and in other ranked-choice voting jurisdictions, such as Maine, Alaska, and about 30 other counties and municipalities—if no candidate gets more than 50% of the vote, a second round of counting occurs for the voters’ second choice. Lower-polling candidates are eliminated, and through the process of elimination, a winner is chosen.

>>> 9 Things You Should Know About Ranked-Choice Voting

Adams, the Brooklyn borough president and a former police captain, maintains a lead, but it has shrunk to about 2 percentage points. His nearest opponent is currently Kathryn Garcia, commissioner of the New York City Sanitation Department, The New York Times reported. Coming in a close third place, and the only other remaining viable candidate, is Maya Wiley, a former counsel to current New York City Mayor Bill de Blasio.

On Tuesday, the city’s Board of Elections created an uproar after admitting it mistakenly mixed about 135,000 sample ballots meant to test the voting machines for the ranked-choice voting system in with real ballots cast by actual voters. That narrowed the lead and prompted a lawsuit from the Adams campaign.

The board retracted the tabulation after a few hours, admitting the error. On Wednesday, the board released a second-choice tally of Democrats who voted in person that also showed the vote narrowed.

But Rob Richie, CEO of Fair Vote, a leading organization that advocates ranked-choice voting, insists that the confusion in New York City is not indicative of flaws in the process.

“It was bad public relations and botched by the New York Board of Elections, and frustrating for us, but this could have happened with any election,” Richie told The Daily Signal in a phone interview. “The fundamentals of the process are there, and we can move into talking about the outcome.”

He noted that close to three dozen other contests for offices, such as City Council and borough presidents, in the New York City primary were also contested under ranked-choice voting, but didn’t have the same problem.

“We should have a more responsive and more transparent New York Board of Elections,” Richie added. “The city didn’t engage voters. It was murky. They handled it badly.”

This isn’t the first time the New York City Board of Elections has come under scrutiny. In June 2020, the board was heavily criticized for its handling of mail-in ballots in a Democratic congressional primary.

Richie said the process still has bipartisan support across the country, particularly for primary elections. He added that Republicans in Utah have considered adopting the process for their nominating contests. Virginia Republicans used ranked-choice voting at the party’s state convention May 8 to nominate candidates for statewide races in November.

However, the New York City Democratic mayoral primary shows that ranked-choice was “the wrong choice,” said Rebekah Paxton, director of research and coalitions at the Employment Policies Institute, which launched Protect My Ballot, a coalition of state think tanks opposed to the process that includes the Maine Policy Institute, the Alaska Policy Forum, the Fiscal Alliance Foundation, the Oklahoma Council of Public Affairs, and the Freedom Foundation of Minnesota.

“Proponents promised New Yorkers [ranked-choice voting] would discourage negative campaigning and increase voters’ ‘say’ in the outcome of the election,” Paxton told The Daily Signal in an email statement. “Instead, this campaign season saw voter confusion and a slew of accusations leveled between candidates.”

Amidst mishandling by the city Board of Elections, ranked-choice voting adds an additional barrier to the voting process, while failing to deliver on any of its promises.

Cities and states should learn from the debacle in New York City before pursuing such a risky experiment.

The city’s initial preliminary announcement that projected a decisive win for Adams did not include about 125,000 absentee ballots. Full results are not expected until mid-July, according to The New York Times.

“Just like in the 2020 Presidential Election, it was announced overnight in New York City that vast irregularities and mistakes were made and that Eric Adams, despite an almost insurmountable lead, may not win the race,” Trump said in a statement Wednesday, drawing a parallel to his own election night lead before absentee and mail-in ballots were counted.

“The fact is, based on what has happened, nobody will ever know who really won,” Trump said. “The Presidential Race was a Scam and a Hoax with numbers and results being found that are massive, shocking, and determinative. Watch, the mess you are about to see in New York City, it will go on forever. They should close the books and do it all over again, the old-fashioned way, when we had results that were accurate and meaningful.”

The New York City Election, even though an embarrassment and total mess, is far better and more accurate than my 2020 Presidential Election—so, what are people complaining about!

Adams appeared not to appreciate the comparison, tweeting: “Yesterday, the results released by the [Board of Elections] had discrepancies, which are being addressed. There were NO similar issues in November. Neither of these elections were a hoax or a scam. We need to count every vote. That takes time, and that’s ok.”

The Adams campaign sued the Board of Elections in state court and invited other campaigns to join as plaintiffs to force an accurate count.

“Today, we petitioned the court to preserve our right to a fair election process and to have a judge oversee and review ballots, if necessary,” the campaign said in a statement. “We invite the other campaigns to join us and petition the court as we all seek a clear and trusted conclusion to this election.”

While there have been other ranked-choice voting controversies, such as a 2018 Maine congressional race in which the preliminary first-place finisher lost the race, the New York City contest might prompt more scrutiny, said Hans von Spakovsky, manager of the Election Law Reform Initiative at The Heritage Foundation.

“The New York fiasco demonstrates that ranked-choice voting is not only too confusing for voters,” von Spakovsky told The Daily Signal in a phone interview, “it’s confusing for election officials. This was a mistake. Other cities and states ought to be leery of it.” (The Daily Signal is the news outlet of The Heritage Foundation.)

As for other controversies, a 2019 study by the Maine Policy Institute, which opposes the process, found that 17% of candidates who won a preliminary plurality of votes in ranked-choice contests ended up losing their elections. The study reviewed 96 ranked-choice elections nationally.

While jurisdictions may differ on certain details, the ranked-choice voting system specifically works like this: