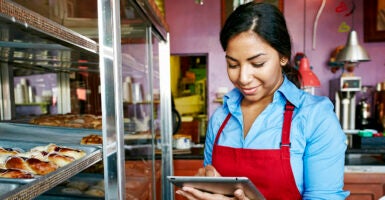 No capitalist gets our money unless we voluntarily choose to exchange it for whatever he's selling. As Dan Mitchell of the Center for Freedom and Prosperity puts it, "Capitalism is the only system that gives people the liberty to make their own choices." (Photo: Peathegee Inc/Getty Images)

“Greedy capitalists” will risk workers’ lives to increase production if government, through agencies such as the Occupational Safety and Health Administration, doesn’t stop that.

It’s logical to assume that government regulation saves lives. Workplace deaths dropped after the Occupational Safety and Health Administration was created. Government officials like showing a graph of the decline.

But if you bother to also look at data from before the agency’s creation, you see that deaths fell at the same rate before regulation began. Why?

“As we become richer, we become safer,” says Dan Mitchell of the Center for Freedom and Prosperity.

Wealth created by capitalism lets us afford safety devices and build machines to do dangerous work. The Occupational Safety and Health Administration is like someone jumping in front of a parade and claiming he led the parade.

“We need more capitalism because when people get rich, they can afford more safety,” adds Mitchell.

Myth No. 5: “Unfettered” capitalism created evil “robber barons” who got rich by “exploiting” workers and consumers.

It’s true that more than 100 years ago, a few entrepreneurs, such as John D. Rockefeller, amassed a huge amount of wealth.

But Rockefeller was neither robber nor baron. He was not born rich, and he didn’t rob. He got rich by offering consumers better deals.

Rockefeller developed ways to deliver oil for less. He won customers by lowering the price of kerosene from 26 cents per gallon to about 6 cents.

For the first time, average people could afford fuel for lanterns so they could read after dark. Rockefeller may have even “saved the whales” by making oil so cheap that killing whales to get whale oil was no longer practical.

His competitors hated him for cutting prices. It was they who convinced the gullible media to call Rockefeller and other entrepreneurs “robber barons.”

Cornelius Vanderbilt was also born poor. At age 11, he quit school to work on boats.

Then he invented ways to make travel cheaper. He cut the New York-Hartford fare from $5 to $1.

Because of capitalists like them, Mitchell points out, “We went from agricultural poverty to a country characterized by middle-class prosperity.”

Still, I’m told that even if capitalism brings us cheaper or better products, it just isn’t “good for us.”

Of course, capitalism can breed nasty materialism. Fox News’ Tucker Carlson sneers, “Does anybody believe cheaper iPhones or more Amazon deliveries of plastic garbage from China will make us happy?”

Mitchell responds, “We’re not buying iPhones and plastic garbage unless we think it’s better for us than the dollars that we have!”

That’s a very important point. No capitalist gets our money unless we voluntarily choose to exchange it for whatever he’s selling. As Mitchell puts it, “Capitalism is the only system that gives people the liberty to make their own choices.”

Myth No. 7: Capitalism’s pursuit of profit drives businesses to create robots that will eventually take away most everyone’s job.

It could happen. Artificial intelligence is powerful. Maybe this time is different.

It’s terrible for the fired employee.

But it’s good for most everyone else. It’s what allows for innovation.

Mitchell points out, “The computer destroyed the typewriter builder’s job, electricity took candlemakers’ jobs,” but those jobs were soon replaced with better ones.

Capitalism has continually generated more jobs. When America began, 90% of workers worked on farms. Now fewer than 2% do. And there are millions more of us.

“As long as our economy has the dynamism that free markets allow,” says Mitchell, “we’re going to see more job creation and higher income levels. That’s what makes the children and grandchildren of typewriter makers so much better off. No other system anywhere in the world has ever come close to capitalism’s ability to generate mass prosperity.”