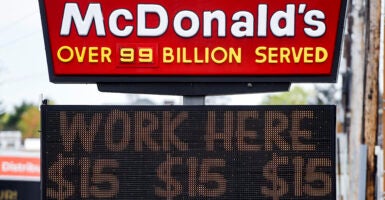 The sign at the McDonald's restaurant seen on April 19 in Sinking Spring, Pennsylvania, with a message below it that reads, "Work Here $15 $15 $15." (Photo: Ben Hasty/MediaNews Group/Reading Eagle via Getty Images)

The media call it a “labor shortage.”

But it’s not a labor shortage; it’s an incentive shortage.

“No one wants to work,” says a sign on a restaurant drive-thru speaker in Albuquerque, New Mexico. “Please be patient with the staff that did show up.”

I never wanted to work. I got a job because I had to support myself. That was good for me. It forced me out of my comfort zone. It made me a better person.

Had government offered me almost equal money not to work, I never would have applied.

Today, government takes away that incentive.

The American Rescue Plan, passed in March, increased unemployment payments by hundreds of dollars and extended them for up to 73 weeks. Given the cost of commuting, etc., many people find they are better off financially not working.

America’s unemployment handouts began during the Great Depression when desperate people really needed help. Still, you could collect for only 16 weeks.

“There are no jobs!” people I interviewed waiting in line for benefits in New York City once told me.

But that wasn’t true. There were lots of entry-level jobs within walking distance.

My staff visited 79 nearby stores. Forty said they wanted to hire. Twenty-four said they’d hire people with no experience.

People in the unemployment line also said that the government should do more to train them for jobs. But New York already offered “job training” centers, so I sent an intern out to see what they did. The first offered to help her get welfare. A second told her to apply for unemployment. Neither place suggested looking for a job.

When she insisted that she wanted work, not handouts, they directed her to yet another building. There she was told she could not receive help because she didn’t have a college degree.

Finally, a fourth office offered her an interview at the sandwich chain Pret a Manger. The boss there told her she’d wasted her time going to the government Jobs Center because she could have gotten that same interview using Craigslist.

Even President Joe Biden has noticed the unintended consequences of his party’s benefits. “If you’re … offered a suitable job, you can’t refuse that job and just keep getting unemployment,” he said.

Seems more than reasonable. Yet a New York Times headline says, “Some say it presents an undue hardship.”

The reporter interviewed a “Mx. San Martin, 27, who uses the pronouns they and them.”

Mx. Martin wants to work with pets. They complained that “there simply weren’t enough jobs that I would actually want.” Restaurant work “is not in my field of interest.”

Bad for all of us when people think they’re entitled to our tax money if bureaucrats don’t get them the exact job they want.