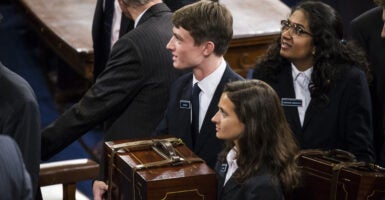 Congressional pages carry chests containing the Electoral College votes from the states and territories for president of the United States at a joint session of Congress on Jan. 6, 2017. Bypassing the Electoral College through state National Popular Vote laws would deepen our nation’s divisions and fuel suspicion among those who already feel forgotten. (Photo: Samuel Corum/Anadolu Agency/Getty Images) 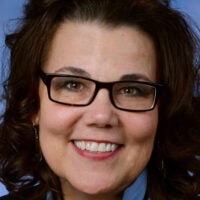 If adopted by enough states and not challenged in court, this unconstitutional effort would potentially disenfranchise the voters of several states by ignoring those states’ choice for president and instead defer to the votes of nonresidents to decide how electoral votes would be cast.

That would have a devastating effect on how Americans select their president.

The ploy is known as the National Popular Vote Interstate Compact. The compact’s enabling legislation bypasses America’s most fundamental body of law—the U.S. Constitution, specifically Article II, Section I—and nullifies the Electoral College, which guarantees each state a minimum number of electoral votes to ensure that small and rural states are represented.

Electoral votes are awarded to states based on population size, and populous states like California, New York, and Illinois have already joined the compact, committing their electors to the winner of the popular vote.

If the compact were to take effect, voters in those more populous states would effectively decide which candidate receives the electoral votes of the compact’s smaller states, rather than that state’s voters themselves.

So, if my state of Michigan joined the compact, our 15 Electoral College votes would go to the popular vote victor, even if that candidate was rejected by Michiganders. Smaller compact states would be overwhelmed by bigger ones.

The compact would increase the electoral power of Americans living in the most populous states and in densely populated urban areas, and threatens to render voters in rural areas permanently irrelevant.

To date, 15 states, including California and New York, have joined Washington, D.C., in adopting the compact’s enabling legislation. With states with a combined total of 195 electoral votes already in hand, it only needs an additional 75 votes to reach the 270-vote presidential threshold, at which point the compact would take effect and effectively decide the presidency based on popular vote totals.

The movement is gaining momentum. In November, Colorado became the most recent state to vote in favor of ceding its electoral votes to the presidential candidate with the most popular votes nationwide. A single state Senate vote was all that prevented Virginia from following Colorado’s example.

The Electoral College, as our Founders intended, forces presidential candidates to expand their popularity beyond big cities. Those seeking the highest office earn national credibility by courting support across the country—in rural and urban locales alike—broadening their appeal and expanding their coalitions.

This system is inclusive and dynamic: Battlegrounds shift as both parties work to win over more Americans. The Electoral College is ingenious, illustrating our Founding Fathers’ wisdom and foresight.

The National Popular Vote Interstate Compact threatens to upend this delicate balance, throwing presidential elections into disarray. Lacking a governing body or other process to resolve differences in how member states apply the compact, states would have to turn to the courts to settle disputes over how member states interpret other states’ results to determine the winning candidate.

The compact also requires officials in member states to accept other states’ reported election results, even if the results are known to be incomplete and inaccurate, in spite of being officially certified.

With voter confidence at an all-time low, a full and fair national recount after a close election would be nearly impossible under the National Popular Vote plan because states have different standards on when and how to conduct recounts. With every state setting its own recount statutes, it could be left up to the courts to decide, rather than the voters.

That would further move us to a federal takeover of elections, instead of preserving the important role that each state plays in the presidential election process.

Allowing presidential candidates to win with just regional support (e.g., the East and West coasts) or just urban areas would be unfair and further erode confidence in democracy.

Bypassing the Electoral College through state National Popular Vote laws would deepen our nation’s divisions and fuel suspicion among those who already feel forgotten. The Electoral College, by contrast, compels anyone aspiring to the highest national office to seek support from a wide spectrum of the electorate and to understand the unique challenges faced by every American.

The Electoral College has been a bulwark against the tyranny of the majority and has contributed to America’s nearly 250-year history of peaceful transfers of power. It is an American institution that deserves our protection and support.