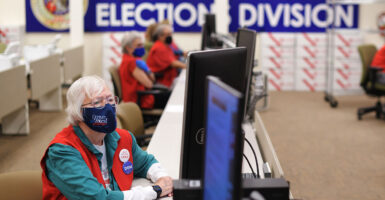 Colorado residents approved a measure Wednesday to join a list of states pledging to award their electoral votes to the presidential candidate who obtains the majority of the popular vote.

Proposition 113 passed with roughly 52% approval from voters, entering Colorado into the National Popular Vote Interstate Compact, according to The Denver Post. The state joins 15 other jurisdictions across the U.S., including California, Illinois, New York, and Washington, according to the compact’s website.

States in the compact will not switch to awarding their electoral votes based on the popular vote until the group obtains support from enough jurisdictions to total at least 270 electoral points, according to the website. The National Popular Vote Interstate Compact raised its total to 196 after Colorado’s entrance to the group, the organization wrote.

“The national popular vote is a very straightforward concept,” Democratic Colorado state Sen. Michael Foote told The Hill. “One person should always equal one vote, and the presidential candidate who gets the most votes should win the election.”

But former Colorado House Speaker Frank McNulty, a Republican, told The Hill: “Colorado’s votes should be decided by Coloradans. This is going to reduce Colorado’s clout, and it’s going to reduce our influence on issues like transportation, water, health care, and funding for our military bases.”