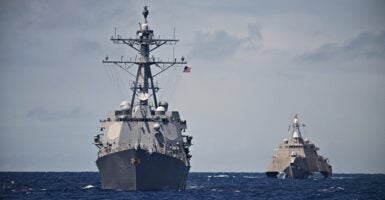 The Pentagon’s budget does not deter or even keep up with China’s growing military. Pictured: A USS Destroyer and Littoral Combat Ship hunt together in the South Pacific. Taken during a Pacific deployment in 2014. (Photo: Benny Winslow/Getty Images)

Brent Sadler is a senior fellow for Naval Warfare and Advanced Technology at The Heritage Foundation.

Consider the following events that have taken place over the past three months:

Russian cyber attackers shut down the Colonial Pipeline Co.—the largest in the U.S.—for one week, which caused gas shortages in the U.S.

In both instances, the Department of Justice recovered some of the paid ransoms, but these attacks underscore patterns of vulnerability.

More than 100,000 Russian troops massed the Ukraine border for exercises that could precede an invasion. Russia also mobilized its navy in the Black Sea around Crimea, which it illegally annexed in 2014.

The Chinese Navy recently conducted drills with its aircraft carrier to the north and east of Taiwan. The largest Chinese air incursions into Taiwan’s southern airspace occurred at the same time of these drills.

These recent challenges comprise just a few of the thousands the U.S. Navy faces every day at sea.

Despite these growing threats, the Biden administration will not grow the defense budget to keep up with growing inflation. The Navy has delayed shipbuilding plans, shrunk its manpower, and withdrawn from modernization opportunities, leaving America more vulnerable to more attacks from China and Russia.

Deputy Secretary of Defense Kathleen Hicks said in June that the 2022 defense budget will meet the challenges from China. But the Pentagon’s budget does not deter or even keep up with China’s growing military.

Since 2005, China has built an archipelago of man-made military garrisons in the South China Sea and added 117 warships to its fleet. The U.S. Navy added five during that same time.

China’s People’s Liberation Army is growing its fleet and infantry forces, indicating that China plans to complete operations far away from its homeland.

This defense reduces the Navy’s manpower and decommissions and cuts procurements of new Navy warships while prioritizing research and development. President Joe Biden’s team bets conflict will take place in the distant future—if at all.

In this context, the Pentagon’s budget, particularly with the Navy, makes little sense.

In this memo, the Navy is told to slash base-operating support funds by 5% while funding educational efforts, violence prevention programs (e.g., sexual assault), and an office dedicated to diversity, equity, and inclusion.

Harker then asserted that the Navy cannot pay for “air, surface, and subsurface platforms.” Instead, the Navy must choose to invest in air or surface or subsurface for next-generation platforms.

But fixating on only one domain of warfare ignores the comprehensive challenge confronting our forces by China and Russia—cyber, space, air, land, and sea.

This type of budget prioritization undermines a decade of preparation by the Navy. By developing cutting-edge warfighting plans (e.g., distributed maritime operations and expeditionary advanced base operations) and investing in new weapons to execute these plans—including the F-35, unmanned ships like the submarine Orca, and long-range weapons like the SM-6 missile—the Navy has kept pace in all domains of modern naval warfare.

To choose one domain for investment at the expense of others creates gaps adversaries can exploit.

Harker then openly admitted that “the Navy cannot afford to own, operate, and maintain its current infrastructure and must prioritize demolition.”

Rather than increasing maintenance resources that the Government Accounting Office has called inadequate and that Harker admits the Pentagon cannot afford, the Defense Department will demolish infrastructure. This is counterintuitive, to say the least.

If China was not racing ahead of our military capacities and the other Cabinets did not urgently need funding, Biden’s defense budget might seem reasonable. Out of 15 Cabinet departments, 11 have at least 10% budget increases.

But those Cabinet departments do not urgently need funding. The defense budget—which only accounts for about 13% of the federal budget—is frugal in comparison.

The Biden administration could admit the U.S. will prioritize entitlements, social programs, and dubious economic projects instead of competing against China and Russia. A feel-good option in the near term will put the nation in peril sooner than most think.

Or the Biden administration could balance domestic programs while protecting America from China and Russia. This is a better choice.

The Navy needs more ships to keep up with China’s growing armada and Russia’s increasing assertive navy. Making the Navy choose between investing in future capabilities or building more ships is a false choice. The Navy urgently needs both.