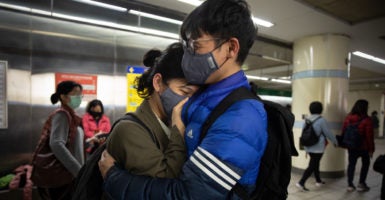 China’s isolation of Taiwan, which has been exemplary in fighting COVID-19, is counterproductive as the world struggles during the coronavirus pandemic. Pictured: A couple embrace while waiting for a commuter train March 18 in downtown Taipei, Taiwan. (Photo: Paula Bronstein/Getty Images)

China, where the new coronavirus first emerged, has reacted with the Chinese Communist Party’s trademark mix of obfuscation and truculence throughout the COVID-19 crisis. This week, this potent cocktail was again in evidence in the city of Hong Kong.

Beijing promised that Hong Kong, an international port and British creation that was a crown colony until London ceded it to China in 1997, would enjoy several freedoms for 50 years, including freedom of the press.

But China cried foul when a Hong Kong journalist used that freedom this week.

The journalist asked the assistant director-general of the World Health Organization, Bruce Aylward, to comment on how Taiwan has performed during the coronavirus crisis and whether WHO would reconsider Taiwan’s membership.

Hong Kong’s commerce and economic development secretary, Edward Yau, said RTHK had “breached the One-China principle and the purposes and mission of RTHK as a public broadcaster.”

Part of that mission is “to foster a sense of citizenship and national identity,” RTHK reported Yau as saying.

The secretary admonished RTHK to henceforth behave in a “professional and vigilant manner.”

The exchange between Tong and Aylward went viral in a major embarrassment to the World Health Organization and to China.

A hapless Aylward twists and turns to avoid answering the question, pretending at one point that his screen has frozen and at another that he has not heard the questions.

At another point, Aylward urges Tong, a reporter from Radio Television Hong Kong, to move on to another subject.

The reason is that the People’s Republic of China—mainland China—does not allow international bodies even to acknowledge the existence of Taiwan. The island nation, today home to a capitalist, free democracy, was the refuge of the Nationalist government that lost the Chinese civil war to the communists in 1949.

Since then, there has been a pretense that both the mainland and island are officially China, a convenient way for the U.S. and most other countries in the world to maintain relations with Beijing and also a relationship with Taiwan.

In reality, though, Taiwan is truly autonomous and entirely self-governing. As such, for the good of the Taiwanese people, regional stability, and the proper management of global challenges—such as pandemics—Taiwan should have a seat at the table in world bodies.

To say so is not a violation of any diplomatic protocols. For a reporter to ask a question about its status in WHO is certainly appropriate. And even if it weren’t, that’s no reason to censor the reporter.

China’s imposed isolation of Taiwan is counterproductive as the world struggles to fight the coronavirus pandemic. Taipei’s response to the outbreak has been characterized as exemplary.

As the BBC put it, Taiwan is “seen as one of the few places in the world which has successfully stemmed the spread of the coronavirus without resorting to draconian measures.”

A discussion of what Taiwan has done, especially by a senior WHO official, is a matter of great importance to the world.

Aylward’s performance revealed the great degree to which China controls the World Health Organization, even to the point that one of its top officials will kowtow to Beijing rather than take up such a topic. Aylward and other WHO leaders cannot even find a way to answer an honest question.

Whether China ordered Yau to act in this manner or the Hong Kong government acted on its own, we don’t know. But clearly things have gotten to the point that censorship, whether ordered by Beijing or self-imposed, is now a cloud over Hong Kong.

It is hard to remain economically free if freedom of the press is not respected.