I Got Paid a Duplicate Stimulus Check, and It’s Probably Bad News 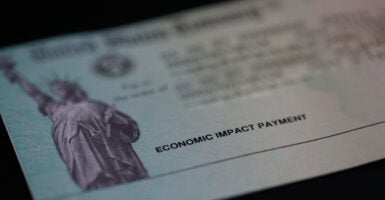 Last spring, the IRS reported to have paid out more than $69 million in erroneous stimulus checks under the Coronavirus Aid, Relief, and Economic Security Act. (Photo: Gabe Ginsberg/Getty Images)

Last March, I got an extra $1,400 check from the IRS—money I shouldn’t have received. I had already received an economic impact payment earlier in the month from my parents because they claimed me as a dependent on their 2019 return and filed their 2020 taxes a few months after I did. It seems the IRS failed to catch that, and now I am stuck holding an extra $1,400 that doesn’t belong to me.

Most people in my position would probably have just counted their lucky stars the IRS made such an error, sighed in relief to have gotten extra funds during these difficult times, or perhaps even called up their friends to tell them, “Drinks are on me!”

But looking at that extra $1,400, I couldn’t shake the sinking feeling that there’s a deeper systematic issue lurking beneath the surface and that somehow I was going to get penalized for it. My major concern at this point: What happens if the IRS comes knocking on my door?

My case isn’t unique. Last spring, the IRS reported to have paid out more than $69 million in erroneous stimulus checks under the Coronavirus Aid, Relief, and Economic Security Act. Unfortunately, my duplicate check and those sent to others are evidence that the errors that happened back in 2020 are still occurring with the Rescue America Plan Act economic impact payments.

While the IRS has offered some guiding FAQs for duplicate stimulus recipients, the information is ultimately subject to change and lacks legal authority. More importantly, the agency has still not explicitly outlined if people will get penalized if they do not comply with the step-by-step return process.

According to Annette Nellen, director of San Jose State University’s graduate tax program, the IRS needs to issue more specific guidance directing individuals to return the money and document everything. Chances are many Americans are unaware that they even received an erroneous stimulus payment, and that the people who do realize it may hold onto it due to financial stress or not wanting to be the fool that returns money.

Considering the general confusion surrounding the last three relief payments, it’s unrealistic for the agency to expect people to return erroneous checks at this point. It’s a tall order to expect Americans who recognized that they got a duplicate check to navigate a convoluted IRS website and return a stimulus check if they might not even be punished for pocketing it.

The IRS’ power in recalling duplicate payments will be dependent on whether it classifies them as rebates or advance payments. If it isn’t considered a rebate claimed on a tax return, “the IRS is far more limited in its ability to take back the money,” says Caleb Smith, director of the University of Minnesota’s tax clinic.

“They have to use a much more constrained method of getting it,” like making a soft ask for the money or offsetting future refunds, Smith says.

Regardless, until the IRS decides how to rectify its mistake, there is still a chance that it can demand erroneous payments to be returned— just like it did for the second-round stimulus. Getting slapped with a $1,400 repo charge for a misallocated check—that was most likely spent on looming bills—is something no family wants to experience.

The country is climbing out of a recession, and it’s ridiculous that Americans need to be wary that they could be held liable for a federal agency’s internal mistake.

The pandemic, the last two tax seasons, and three rounds of stimulus payments have made it clear that the IRS’ systems are beyond antiquated. It is a pretty clear sign that the IRS is in desperate need of renovation when there are reports of thousands of checks being sent to incorrect bank accounts.

With that said, the sole blame cannot be laid solely at the IRS’ feet. While working as a congressional IRS caseworker, I saw firsthand how the IRS was slapped with momentous challenges, such as physical offices being closed, high burnout rates, archaic computer systems, and overwhelming call volumes.

I dislike paying taxes as much as the next person, but it’s time to have the hard conversation of reviewing and restructuring the IRS. As long as there is a federal government, there will be a tax collector. America might as well make sure no one else is stuck holding the bag for systemic inefficiencies out of their direct control.

This article was updated to indicate that the IRS has not specified whether individuals will be penalized for failing to return erroneously submitted stimulus checks.