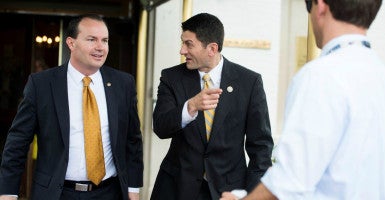 Sen. Mike Lee, R-Utah, was asked to introduce House Speaker Paul Ryan, center, barely a day before the major speech. The two are pictured leaving the Capitol Hill Club in May, about five months before Ryan was elected the House's top Republican. (Bill Clark/CQ Roll Call/Newscom)

Sen. Mike Lee got the call to do the introduction honors today as House Speaker Paul Ryan gave his first major address since taking up the gavel. But the Utah Republican didn’t have much time to prep.

Ryan’s office extended the offer the day before, The Daily Signal has learned.

“It was kind of a last-minute thing,” a senior Lee aide told The Daily Signal. “But we were more than happy to do it.”

A Ryan aide confirmed the timing of the decision, adding that the two are friends.

According to prepared remarks obtained by The Daily Signal, Lee will praise Ryan’s election as speaker as showing that “among other surprises this year, the old rules in Washington and in the Republican Party are changing.”

The slot introducing Ryan comes on the heels of a major legislative victory for Lee.

Lee spearheaded an effort to repeal Obamacare more fully through a fast-track budget mechanism known as reconciliation. In July, he secured a commitment from GOP leadership to pursue this repeal route.

But Lee balked at a House reconciliation bill that would repeal only portions of President Obama’s marquee legislative achievement.

After Lee and two other senators, Ted Cruz of Texas and Marco Rubio of Florida, threatened to oppose the legislation, Senate Majority Leader Mitch McConnell announced he would ax the House bill for a much stronger repeal package.

That was Monday night. On Wednesday, Lee’s office received word that Ryan, R-Wis., wanted to tap him for the introduction to his speech at the Library of Congress.

The move was likely an effort by Ryan to strengthen his relationship with rising conservatives in both the House and the Senate. Before his election as speaker in October, some conservatives complained that Ryan had been too close to former leadership and thus was unfit for the job.

In the introduction, set for 12:30 p.m., Lee also will peg Ryan’s effort to open up the legislative process in the House as “a new conservative project,” one that “follows the example of our founding generation.”

The Utah senator and conservative favorite will say he believes Ryan’s well suited to the task.

“That is a job Paul Ryan is uniquely capable of doing. Because at his core, he understands that for this new conservative generation to succeed, ideas must drive our politics, not the other way.”