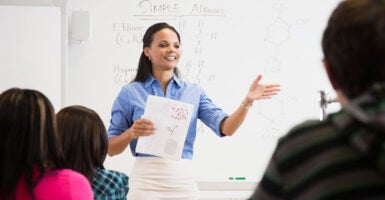 "As an educator myself, I can say our schools should be teaching reading, writing, and arithmetic. They should be teaching about the history of this great nation and survival skills in the job market," Daily Signal reader Audra Hill writes. (Photo: Jon Feingersh Photography Inc./Getty Images)

Editor’s note: The Daily Signal’s audience isn’t shy in speaking its mind about our coverage of what’s happening in American culture, workplaces, and schools. See for yourself in this dip into the mailbag at [email protected]—Katrina Trinko

It’s so refreshing to see that someone in our government actually is doing something to stop this nonsense and chaos that is promoting racism in the name of “stopping racism.” Critical race theory is so twisted, actually promoting what it says it is trying to stop.

As an educator myself and married to a high school coach and business owner, I can say our schools should be teaching reading, writing, and arithmetic. They should be teaching about the history of this great nation and survival skills in the job market.

We need to teach how to work hard and the benefits of hard work. Teaching the benefits of free enterprise and the opportunities that come from owning your own business and the dangers of taking more government subsidies. Teaching how to standing on our own two feet as a nation and not relying on other countries for our fossil fuels.

We should be teaching independence, not dependence. Our schools need to stop dumbing down our students and instead encourage them to do great things. It’s amazing to see what kids can do and the goals they can reach when they are simply encouraged.

Additionally, we should be teaching respect for each other, not promoting racism and making people look bad. That is absolutely not the job of our schools and institutions of higher learning.

Thank you for giving some hope to those of us in this nation who stand up for freedom and opportunity.—Audra Hill, Park Rapids, Minn.

Dear Daily Signal: This is response to Larry Elder’s commentary article “Liberals Should Learn From Weak Jobs Report That Incentives Matter.” We are business owners in an area of Pennsylvania where “help wanted” signs pepper the landscape like flies on ripe fruit.

The biggest problem facing employers here is lack of staffing. Jobs are abundant but workers taking them are few. We just visited our son in another area of the country. Same issue there. The jobs are plentiful but the workers are not taking them.

We need to immediately end the federal government’s “enhanced” unemployment bonus. And now that vaccines are available, we need to rescind the “COVID-19 fear” excuses.

The Bible speaks truth when it says: An empty stomach is an incentive for the lazy man to work (Proverbs 16:26).—Barbara Orsag, Quarryville, Pa.

Democrats casting the prevention of illegal voting as voter suppression is like a thief casting combination safes as money withdrawal suppression.—Matt Gutchess, Ohio

Dear Daily Signal: My reaction to David Ditch’s commentary is that we need to get back to our origins (“6 Charts Highlight Troubling Trends Driven by Growing Nondefense Spending”). Eliminating all of the federal bureaucracies except Defense, State, and Homeland Security. Maybe keep the FBI if greatly reorganized.

Social Security needs to be privatized. Medicare can be privatized, and medical help for the poor can be handled by the states.

Money saved by greatly reduced federal employment can be used to pay off the debt. Then a balanced budget amendment is needed. A constitutional amendments to limit the percent of gross domestic product allowed to be taken as taxes is needed. And a limit on years one can serve in Congress is a must.

I’m sure there are more changes needed, but its a start.—Michael Campbell, San Antonio, Texas

The questions I have are: What is the supposed benefit of teaching The New York Times’ 1619 Project and critical race theory in our schools?  Why is this even being considered?

What does the Biden administration in concert with the teachers unions believe the benefit is of separating us by race—which to me seems like what the 1619 Project and critical race theory are pushing? How is denigrating the white race for being white help the black race rise up to better themselves?—David J. Chiusano, Glen Rock, N.J.

President Joe Biden may have rejected the true history of America reflected in the 1776 Commission’s report, but I have to believe the vast majority of the American people have not.

I urge the commission’s chairman and vice chairman, Larry Arn and Carol Swain, respectively, to charter a citizen’s society dedicated to perpetually funding the commission’s work, supporting its mission, and developing a K-12 curriculum that truthfully depicts the history of the American experience and why America became the leader of the free world. Millions of home school, charter school, private school, and parochial school students would subscribe.

I believe millions of American patriots are looking for a tangible way to loudly rebuke and rebut those pushing the Marxist lies that undergird critical race theory and The New York Times’ 1619 Project. Millions of working-class and senior citizen Americans are stronger and ultimately more powerful than the socialist elites in the Biden administration, academia, leftist media, and corporate boardrooms.

A ‘1776 Society’ may be just the ticket to engage America’s working class, along with millions of American parents and grandparents, in defending and advancing their true historical legacy and in honoring the men and women of all races, colors, and creeds who built it.—Don Volz, New Braunfels, Texas

Dear Daily Signal: I loved Star Parker’s presentation of why the USA’s birthrate could lead to the demise of our country and our ability to take care of our elderly and retired (“Birth Dearth About Values, Not Economics”).

When positions are stated and supported with data, as Star Parker writes, it brings freshness to the argument without creating disdain. Empowering parents with options about educating their kids seems to be a logical play, removing government. Let’s reinstate religion in our lives.—Mike Dejewski, Hartland, Wis.

I’m in agreement with Star Parker’s notion that the declining birthrate is driven by a lack of interest in marriage and children. We live in a society of self-gratification littered with large houses, Range Rovers, and vacations anywhere, preferably exotic.

Restaurants are packed with people taking pictures of their food to share immediately with all of their contacts. Amazon is experiencing incredible growth supplying our wants almost immediately. Meanwhile, saving rates for retirement are low.

Marriage, and especially children, require the sacrifice of time, sleep, and personal wants. Children require money that otherwise could be spent on oneself. In order to be upstanding adults, parents must invest themselves in the rearing process, which means giving up immediate self-gratification.

Until we are ready to invest in something other than ourselves, until the value of sacrifice reemerges, we will see fewer children on our streets.—Steve Kosmalski, Blue Ash, Ohio

Dear Daily Signal: One more example of why I refuse to support PBS (“‘Drag Queens in Training’: Kids Show on PBS Features ‘Lil Miss Hot Mess’ Reading, Dancing”). This kind of effort to persuade little children that sexual orientation is a matter of choice, not biology, is anti-science and destructive.

It is propaganda, not education. PBS should be subjected to market forces, as are other media.—Marcia Sielaff, Gilbert, Ariz.