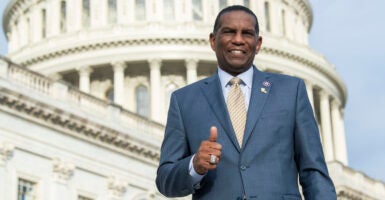 "This is the United States of America, and no one should ever be subjected to the discrimination that our laws so clearly prohibit," says Rep. Burgess Owens, R-Utah, pictured Jan. 4 during a photo session for freshmen members of the House Republican Conference on the steps of the Capitol. (Photo: Tom Williams/CQ-Roll Call/Getty Images)

House Republicans seek passage of legislation to push back against a rule proposed by the Biden administration to promote teaching Americans to judge each other based on skin color.

At least three House GOP members last week announced legislation, with two bills targeting schools, one the military, and one all federal institutions.

Public comment closes Wednesday on the Department of Education’s proposed rule to prioritize K-12 grants based in part on whether schools teach critical race theory. This would include teaching The New York Times’ disputed 1619 Project, as well as the teachings of controversial author Ibram X. Kendi.

Critical race theory is a theoretical framework that contends individuals either are oppressed or are oppressors based on their skin color; it makes race the prism through which proponents analyze all aspects of American life.

“I grew up attending segregated schools in the Jim Crow South during a time when people were treated differently based on the color of their skin,” Owens, who is black, said in a public statement. He added:

Critical race theory preserves this way of thinking and undermines civil rights, constitutionally guaranteed equal protection before the law, and U.S. institutions at large. This is the United States of America, and no one should ever be subjected to the discrimination that our laws so clearly prohibit.

One of the proposals by Owens, a former pro football player, is a bill that would prohibit teaching of critical race theory within federal institutions, according to a press release. The other is a resolution highlighting the dangers of teaching critical race theory in U.S. schools and decrying the “damaging philosophy within this prejudicial ideological tool.”

Both measures have 30 co-sponsors.

Roy’s bill would include any elementary school, secondary school, or institution of higher education.

“Critical race theory, like all its racist derivations, is a direct affront to our core values as Americans,” Roy said in a public statement, adding:

No one in America—be they students, servicemen and women, government employees, or anyone—should be indoctrinated to hate our country, its founding, or our fellow citizens. Worse yet is its pernicious demands to ‘divvy us up by race’ and perpetuate the lie that we should be treated differently by virtue of our skin color. There is no room for state-sanctioned racism anywhere in our society, and we must oppose it with all our might. …

As Americans we believe that all are created equal by God Almighty, regardless of their skin color. That self-evident truth, and the American promise that comes with it, are worth fighting for.

Specifically, the Roy legislation would ban federal funding for teaching that any race is inherently superior or inferior to any other race, color, or national origin; teaching that the United States is a fundamentally racist country; that the Declaration of Independence or Constitution are fundamentally racist documents; and that an individual’s moral character or worth is determined by the individual’s race, color, or national origin.

The proposed Department of Education rule states that American history and civics should reflect the role of diversity in the nation’s democracy as well as the consequences of slavery.

“This acknowledgement is reflected, for example, in The New York Times’ landmark ‘1619 Project’ and in the resources of the Smithsonian’s National Museum of African American History,” the Education Department’s proposed rule states.

The Biden administration regulation goes on to say that “schools across the country are working to incorporate anti-racist practices into teaching and learning.” It also says:

As the scholar Ibram X. Kendi has expressed, ‘[a]n antiracist idea is any idea that suggests the racial groups are equals in all their apparent differences—that there is nothing right or wrong with any racial group. Antiracist ideas argue that racist policies are the cause of racial inequities.’ It is critical that the teaching of American history and civics creates learning experiences that validate and reflect the diversity, identities, histories, contributions, and experiences of all students.

Earlier this month, Randi Weingarten, president of the American Federation of Teachers union, defended teaching both the Times’ 1619 Project and critical race theory in classrooms.

“All of a sudden you’re hearing people talk about critical race theory, people who have no idea what that term means, or trying to ban the 1619 Project because it is trying to … actually teach a factual version of oppression in America,” Weingarten said May 6.

“Critical race theory is a poison to the psyche of our nation. This destructive ideology has no place in America’s institutions, and the bills I’m introducing will help ensure that our government isn’t spending resources on promoting it,” Bishop said in a public statement.

Lt. Col. Matthew Lohmeier, commander of 11th Space Warning Squadron at Buckley Air Force Base Colorado, told Fox Business that he was relieved of his post last week after he criticized training in critical race theory.

As The Daily Signal previously reported, the Navy included books promoting critical race theory as part of a reading list for sailors, including “How to Be an Antiracist” by Kendi and “The New Jim Crow” by Michelle Alexander.

“But President [Joe] Biden and the radical left are committed to pushing this neo-Marxist propaganda into our classrooms, places of work, and even the military,” Bishop said. “Legislators on every level must fight back against this insidious effort to undermine the truths about our nation’s founding with everything we’ve got.”

Local school districts are drawing attention for implementing the teaching of critical race theory. Examples include: