Why Does the Left Seemingly Hate Israel? 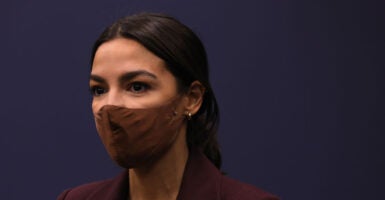 The new core of the Democrats, as emblemized by Reps. Alexandria Ocasio-Cortez, Ilhan Omar, and Rashida Tlaib, has in the past questioned the patriotism of American Jews who support Israel, and occasionally has had to apologize for puerile anti-Semitic rants. Pictured: Ocasio-Cortez listens during a news conference to introduce legislation at the Rayburn House Office Building March 18, 2021, in Washington, D.C. (Photo: Alex Wong/Getty Images)

With more than 3,000 rockets having been fired into Israel by Hamas recently, the Democratic Party seems paralyzed over how to respond to the latest Middle East war.

It is not just that it fears that “The Squad,” Black Lives Matter, the shock troops of Antifa, and woke institutions such as academia and the media are now unapologetically anti-Israel. It is also terrified that anti-Israelism is becoming synonymous with rank anti-Semitism. And soon, the Democratic Party will end up as disdained as the British Labour Party under Jeremy Corbyn.

The new core of the Democrats, as emblemized by Reps. Alexandria Ocasio-Cortez of New York, Ilhan Omar of Minnesota, and Rashida Tlaib of Michigan, has in the past questioned the patriotism of American Jews who support Israel, and occasionally has had to apologize for puerile anti-Semitic rants.

The left in general believes we should judge harshly even the distant past without exemptions. Why then, in venomous, knee-jerk fashion, does it fixate on a nation born from the Holocaust while favoring Israel’s enemies, who were on the side of the Nazis in World War II?

It was not just that the Grand Mufti of Jerusalem, Amin al-Husseini, was a Nazi sympathizer. Egypt, for example, welcomed ex-Nazis for their hatred of Jews and their military expertise, including infamous death camp doctor Aribert Ferdinand Heim and Waffen-SS henchman Otto Skorzeny. The Hamas charter still reads like it is cribbed from Hitler’s “Mein Kampf.”

The left claims it champions consensual government and believes the United States must use its soft-power clout to isolate autocracies. But the Palestinian National Authority and Hamas refuse to hold free and regularly scheduled elections. If an Israeli strongman ever suspended free elections and ruled through brutality, U.S. aid would be severed within days.

If history and democratic values can’t fully explain the apparent hatred of Israel on the left, perhaps human rights violations do. But here, too, there is another example of radical asymmetry. Arab citizens of Israel enjoy far greater constitutional protections than do Arabs living under either the Palestinian National Authority or Hamas.

Is the left bothered by the allies of Hamas? After all, most are autocracies such as Iran and North Korea.

We return, then, to other reasons for the woke contempt directed toward Israel.

In part, the Western left always despises the unapologetically successful—as if they are inevitably beneficiaries of unfair privilege. Underdog Israel was not so hated from 1947 to 1967. Then, it was poorer, more socialist, and in danger of being extinguished by its many neighboring enemies.

But after the victories in the 1967 and 1973 wars, the Israeli military proved unconquerable in the region, no matter how large the numbers, wealth, and armaments of its many enemies.

For the left, Israel’s current strength, confidence, and success mean it cannot be seen as a victim, but only as a victimizer. As its Iron Dome missile defenses knock down the flurry of Hamas rockets, and as its planes take out the military installations that launched those rockets, the left bizarrely believes Israel wins too easily and acts “disproportionately.”

The left also has a strange idea of current “imperialism” and “colonialism.” The general rule is that Westerners cannot settle in numbers in the non-West. But the reversal is certainly not true.

Millions of Middle Easterners are welcomed into Belgium, France, Germany, the U.K., and the United States. Yet Jews have been in what is now Israel since nearly the dawn of civilization. And their 1947 borders only grew after they were attacked and threatened with extinction.

The left claims that its anti-Israelism has had nothing to do with anti-Semitism. But it is almost impossible now to make that distinction, when woke criticism obsesses over democratic Israel and ignores far greater oppressors and oppressed elsewhere.

Why are there no demonstrations in major Western cities damning the Chinese government for putting 1 million Muslim Uighurs in camps? Why are the world’s millions of former refugees—the Volga Germans, the East Prussians, the Cypriot Greeks—long forgotten, and yet the Palestinians alone are deified for being perpetually displaced?

Our formal NATO ally, Turkey, received little global pushback for its treatment of the Kurds, or its frequent intolerance of religious minorities. Why does Israel alone always earn such venom?

Hating democratic Israel while it is under attack is not just a reflection of the new woke and ethically bankrupt left. It is also a symptom of a deeper pathology in the West, one of moral equivalence, amoral relativism, and self-loathing.

Hating Israel has become the surrogate Western way of hating oneself.