On Holocaust Remembrance Day, We Must Confront Today’s Anti-Semitism 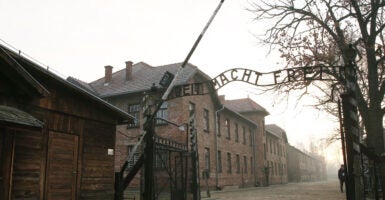 On Holocaust Remembrance Day, it’s important to reflect on the horrific persecution of the Jewish people by Nazi Germany, and to be aware of the rise in anti-Semitism occurring around the world today. Pictured: The main gate of the Auschwitz concentration and extermination camp. (Photo: Damian Klamka/SOPA Images/LightRocket/Getty Images)

Chris Gacek, Ph.D., is the senior research fellow of coalitions at the Family Research Council.

On this day 76 years ago, Soviet troops liberated the Auschwitz concentration camp, where Nazi forces murdered more than 1.1 million people, the vast majority of them Jews. Greeted by starving prisoners rejoicing at their arrival, piles of corpses, and unthinkable living conditions, the unknowing Soviet troops were horrified by what they saw.

As more became known about the Nazi’s extermination program, Auschwitz came to represent what may be the greatest anti-human crime in history: the systematic effort to destroy the Jewish people wherever they could be found on the globe.

Accordingly, Jan. 27 is commemorated as International Holocaust Remembrance Day. This commemoration is about that crime against one people in a specific place and time—the Jews who fell under Nazi control before May 10, 1945. As we recall the relentless Nazi effort to destroy the Jewish people, it is imperative that we also not overlook the current resurgence of Jew-hatred around the globe.

The anxiety and social strain of the current pandemic has served as an occasion for some to deploy modernized themes of ancient Jew-hatred. Abhorrent conspiracy theories simmered online, especially in Europe, during the pandemic. Hate-filled comments accused Jews of creating and spreading COVID-19 or, alternatively, asserting that the virus was simply a “hoax” concocted by Jews. Such absurd competing accusations demonstrate how anti-Semitism often manifests itself in expressions of irrational sentiment and bigotry.

Hatred toward Jews does not merely fester secretly online. In many Western countries, it thrives out in the open under the socially acceptable rubric of “anti-Zionism.” By claiming that the only Jewish state is inherently racist, akin to the South African apartheid regime, anti-Zionism denies the Jewish people their right to self-determination in a state and land of their own.

Anti-Zionism is particularly active on American university campuses, where the Boycott, Divestment, and Sanctions movement singles out Israel for economic punishment.

According to U.N. Watch, Israel has received 112 condemnatory resolutions from the U.N. General Assembly since 2015, many times more that of notorious human rights abusers like North Korea, Myanmar, and Syria over that span of time. This widely disproportionate targeting of the Jewish state indicates a prevalent anti-Jewish sentiment among world leaders.

In its annual report in 2020, the U.S. Commission on International Religious Freedom expressed serious concern over the rise of anti-Semitism in the world, especially in Europe.

As the situation has grown more perilous for Jews in Europe, a 2019 survey found that 41% of young Jewish Europeans have considered emigrating from their native lands out of concern for their safety.

Many Jews are now making plans to leave for Israel as many European governments have lost control of the situation, with anti-Semitism becoming more widespread and violent. This reality would have been unimaginable 20 years ago.

In the Middle East, animus toward Jews runs hot and is ubiquitous. Iran stands apart as a country that espouses and promulgates the most vicious Jew-hatred. It continues to be the only government in the world that denies the Holocaust as a matter of state policy.

Even the United States has seen the emergence of anti-Semitism. On college campuses, the political left and venomous anti-Semitic organizations like Students for Justice in Palestine have come to dominate the political debate. There the anti-Semitism is masked, as it is in many places, as anti-Zionism, but that covering is only a thin veneer.

There is also a violent strand of American Jew-hatred that has its roots in the political fringe-right. Recent attacks at the Tree of Life synagogue in Pittsburgh, Pennsylvania, and the Chabad synagogue in Poway, California, have born this out. Simultaneously, those acts of murder disabused Americans of any notion that Jewish houses of worship were safe in the United States.

Unfortunately, studies show declining knowledge about the Holocaust among younger Americans. One survey found that that 63% of American millennials and Generation Z did not know that 6 million Jews were murdered in the Holocaust, and over half of those thought the death toll was fewer than 2 million.

Another article tells us that two-thirds of millennials do not know what Auschwitz stands for and what took place there. Many cannot place the Holocaust within the framework of World War II. This is a disastrous place for our nation to be.

On this day, we commemorate the millions of innocent Jews who were cruelly imprisoned, tortured, and murdered on an industrial scale. Remembrance must also incorporate a commitment that such evil must “never again” take place.

Jews know that this hatred has manifested itself against them in many places over millennia. Whether it be in Queen Esther’s biblical Persia, Judea’s destruction by the Romans, or 15th-century Spain—this is a recurring evil that knows no parallel human history.

Therefore, it is necessary that we set aside this day each year to remember the Holocaust. We must use this annual occasion to recommit ourselves to protect the Jewish people as fellow human beings. But they must also be defended as a persecuted minority that stands for a set of unique religious and cultural beliefs that make them distinct.

Tyrants, like Hitler, have raged that Jews answer to a higher authority and will not yield. On this point, we must stand with the Jews every day of the year.