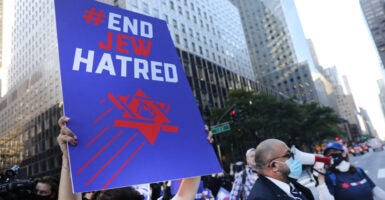 Critical race theory is a popular left-wing ideology that purports to explain the societal inequalities that prevent racial and ethnic minority groups from achieving social and economic success. While it presents itself as fighting prejudice, a closer look reveals that it is the driving force behind much of today’s left-wing anti-Semitism.

The clearest example of this occurred last year at a Black Lives Matter protest in Washington, D.C. There were chants of “Israel, we know you murder children, too,” and a Harvard student read a poem that called Israel “puppet master of continents,” invoking the stereotype of evil Jews manipulating global politics.

The language used cannot be attributed to the folly of youth, as these stereotypes have also made their way into the halls of Congress.

In 2019, Rep. Ilhan Omar, D-Minn., paraphrased a popular rap lyric, “It’s all about the Benjamins, baby,” as she tweeted support for her anti-Israel politics. The tweet referred to money and Israel’s Prime Minister Benjamin Netanyahu, and made use of the anti-Semitic trope that Jews and their money wield an outsized influence on politics.

Omar, a duly-elected U.S. congresswoman, embraced the age-old anti-Semitic narrative that wealthy, powerful Jews manipulate our political system for their own gain and against the common good. Left-wing proponents of critical race theory may see themselves as fighting oppression, but their ideology’s logical conclusions are stereotypes and hatred that target the Jews.

It also suggests that race, gender, and other identities are social constructs that support larger systems of oppression. White men—by virtue of their male sex and light skin color—are oppressors twice over, while black women are twice oppressed, and white women are both oppressors of blacks and oppressed by men.

Within this system, success is possible, but only if one joins the system that critical race theorists believe oppresses people of color. Thus, if an oppressed individual achieves success, he or she becomes an oppressor regardless of their identity.

If this weren’t bad enough, critical race theorists generally make the mistake of assuming that all Jews are white and hence “privileged” because of their supposed economic power.

Thanks to the Jewish diaspora and to conversion, a great ethnic variety exists among Jews; there are Indian, Ethiopian, North African, and East Asian Jews, as well as those of Central European ancestry. Critical race theory, however, tends to neglect this nuance in favor of the old saw that Jews are white, wealthy, and therefore “privileged”—even more than other white people.

Moreover, because of this privilege, Jews—who endured a genocide in the 20th century—are unable to be victims of implicit bias. This is truly incredible, because according to the FBI, Jews make up 60% of all religious-based hate-crime victims.

By the theory’s perverse logic, Jews are first and foremost members of the oppressor class, bearing guilt for any wrong done to any nonwhite group by any white people. Simply put, critical race theory repeatedly casts Jews as having outsized economic success, even relative to other white people, and this supposed success makes them the worst of the capitalist oppressors.

Anti-Semitism has long depicted Jews as racially inferior and extremely clever puppet masters who surreptitiously control banks, politicians, and the media. The clearest example of this was in Nazi Germany, where Jews were targeted both for being an inferior race and having an outsized grip on German political, economic, and intellectual life. Modern-day critical race theory does much of the same.

This, coupled with anti-Semitism, both target the Jews and blame them for perceived societal ills. But the goal is not simply hatred of the Jewish people; it is to upend the civic order. Jews are just the scapegoat.

This piece was originally published by The Jewish News Syndicate.