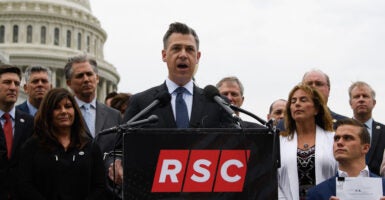 Rep. Jim Banks, R-Ind., is seen here speaking April 21 at a press conference of the Republican Study Committee, of which he is chairman. The group has put forward a comprehensive policy proposal to address the fiscal challenges the country faces in its “Reclaiming Our Fiscal Future Fiscal Year 2022 Budget.” (Photo by Nicholas Kamm/AFP/Getty Images)

Even before the outbreak of COVID-19 and the spending binge that followed, the federal budget was on an unsustainable trajectory.

The Republican Study Committee, the caucus of conservative GOP members of the House of Representatives, has put forward a comprehensive policy proposal to address the fiscal challenges the country faces in its recently released “Reclaiming Our Fiscal Future Fiscal Year 2022 Budget.”

Compared to current law, the Republican Study Committee budget would reduce total spending $14.4 trillion over the next decade, balancing the budget in five years.

Importantly for taxpayers, adopting the policy reforms from the budget would result in nearly $1 trillion in lower interest costs. Debt held by the public would fall from more than 100% of gross domestic product today to 75.6% of GDP in 2031.

The Republican Study Committee budget proactively tackles the most pressing issues in the federal budget, foremost of which is the insolvency of the major entitlement programs.

Because both programs pay out more in benefits than they collect in revenues, unless significant reforms are enacted, the Medicare Hospital Insurance trust fund will be depleted in 2026, while the Social Security trust fund will be exhausted in 2032.

The reforms proposed to reinforce Medicare would ensure higher quality benefits for seniors, allowing beneficiaries to choose from a variety of health plans for the one that best suits their needs. Recognizing the advances in life expectancy since the program was established more than 50 years ago, the eligibility age for Medicare would be adjusted to align with Social Security.

To allow taxpayer subsidies to be focused on those who need them the most, additional means testing would be phased in.

Social Security is the single largest federal program, costing about $1 trillion every year to provide retirement benefits for more than 50 million seniors. The program is badly in need of modernization, with seniors facing a 25% across-the-board benefit reduction in just 11 years when the trust fund is spent down.

The Republican Study Committee proposes to update Social Security while returning the program to the guarantee against poverty in old age that it was originally intended to be.

The budget would institute a new, flatter benefit for new retirees that would increase the initial monthly payments for lower-income workers, while slowing the growth of benefits for those with higher lifetime earnings that require less taxpayer support.

In addition to reforming unsustainable entitlements, the budget would build up other important priorities.

The House GOP group’s budget follows the guidance from military and civilian leaders to increase the defense budget between 3% and 5% above inflation to have the resources necessary to prepare for great power competition.

It would increase the defense budget to $778 billion from the $740.5 billion appropriated in fiscal year 2021. That’s a great step forward that highlights the challenges faced by our military and the necessary modernization efforts that every service is undergoing.

As the Republican Study Committee budget and The Heritage Foundation’s recent work on the Rebuilding America’s Military Project shows, every service has a long road ahead to prepare and modernize for great power competition. That starts with a budget that is sufficient and focused on actual military matters, not on overhauling our energy matrix or distorting American history.

The proposed budget also stresses the importance of increasing the efficiency of defense dollars, through improvement in the defense acquisition system, military health care, and reducing congressionally directed medical research. These long-time Heritage recommendations should be pursued.

While investing in, and promoting efficiency in, national defense, the Republican Study Committee budget would refocus the government back on its core responsibilities by eliminating or reforming dozens of nondefense discretionary spending and other mandatory programs.

It would introduce other efficiencies, such as removing the ineffective and costly so-called buy American requirements.

The budget recognizes that it’s important to keep taxes low and to eliminate economic distortions. Accordingly, it includes several important tax proposals that would promote growth and reduce the tax burden on American families.

In addition to preventing tax increases due to the expiration of the Tax Cuts and Jobs Act, the budget proposes to permanently provide for full and immediate expensing of most business investments, accelerate depreciation, and provide neutral cost recovery for construction expenses, index capital gains taxes for inflation, and end the death tax.

It’s no small feat to draft a complete budget proposal. Indeed, the Republican Study Committee’s budget is currently the only such proposal introduced in this Congress.

It’s an impressive plan that includes many important policy proposals. Perhaps most significantly, it would help reclaim America’s fiscal future.