The Pentagon Can’t Afford to Go Green at Warfighters’ Expense 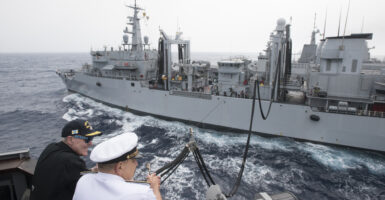 Then-U.S. Navy Secretary Ray Mabus and Italian navy Adm. Giuseppe De Giorgi, aboard the guided-missile destroyer USS Mason on June 16, 2016, observe the U.S. Navy's first underway replenishment in which the fuel was made from alternative sources and transferred from a partner nation's ship. An Italian navy auxiliary ship provided the Mason with biofuel made from waste fat beef and inedible vegetable oil as part of the so-called Great Green Fleet initiative. (Photo: Armando Gonzales/U.S. Navy/Getty Images)

Can the Biden administration have its climate change cake and eat it, too?

With a new goal of slashing greenhouse gas emissions by 2030, vast portions of the U.S. economy and the federal government would have to shrink emissions quickly.

But pressed by the need to engage in great power competition, the Department of Defense has little room to give before emissions reduction efforts affect military capabilities.

The Biden administration faces a clear choice: Accept a less capable military by diverting scarce funds to green innovation endeavors or remain focused on modernizing the U.S. military for the future.

Recent actions give rise to worries the Biden administration may return to the failed experiments of the Obama administration in trying to pursue a greener Department of Defense faster than what current technologies and costs allow.

First, President Joe Biden’s team is committed to replacing the entire federal government’s fleet of vehicles, some 645,000 cars, with electric vehicles. The down payment on such an acquisition will cost upwards of $20 billion.

Of the 645,000, the Department of Defense alone operates approximately 170,000 non-combat vehicles.

More important, however, will be how the Biden administration’s environmental policies affect the Pentagon’s actual military capabilities. After all, past attempts to be environmentally conscious in defense operations have been incredibly costly, without much to show for them.

Take, for example, the Navy’s efforts in 2012 to shift fuel supplies from conventional petroleum-based fuels for ships to advanced biofuels.

Under then-Navy Secretary Ray Mabus, some naval operations in the Pacific began using a 50-50 mixture of petroleum and biofuel, costing the Navy $12 million in one exercise alone.

The same sum could have purchased six times as much oil.

Promises from the Obama administration claimed that a “Great Green Fleet” would be operational by 2020—something that never came to pass.

Whether the Biden administration would attempt to resurrect the Great Green Fleet or try new experiments of its own remains to be seen. However, any push to make the Department of Defense “go green” will come up against two issues.

In this era of likely flat or shrinking defense budgets, the money will have to come from somewhere, and that “somewhere” in this case means vital defense programs.

Under the Biden administration’s proposed budget plan, the Defense Department will lose $5 billion in purchasing power due to inflation and mandatory spending increases on personnel as it moves from 2021 to 2022.

Without budgetary expansion, projects on renewable energy or other green initiatives aren’t just costly; they are costly at the expense of defense capabilities and military readiness.

This reallocation of Pentagon funds might not seem to directly impact the capabilities of the military—the Defense Department’s top priority—but it does because that money is lost investment in other capabilities that can directly benefit the warfighter.

Although the Defense Department is America’s single largest energy user, it’s still quite small in the context of overall domestic energy consumption and even smaller in the global context.

The second issue is that there seems to be some confusion about how climate change should relate to America’s armed services and national defense.

To provide for the common defense, the U.S. armed services must address climate change as it relates to readiness and capable warfighters—and that mission is more than large enough to frame the Pentagon’s climate policies. For example, if global warming is melting ice in the Arctic, the Coast Guard might need to respond by increasing its operations in the region.

The Pentagon has made moves to address the strategic and tactical challenges of climate change. In 2019, the Defense Department released a report detailing the effects of climate change, recognizing that dealing with its outcomes will be necessary “to build a more lethal force” and “strengthen alliances and attract new partners.”

Room for improvement in the military certainly exists, where advances in technology can benefit the Defense Department’s impact on the environment and improve the military’s capabilities.

In March, Defense Secretary Lloyd Austin established a Climate Working Group at the Department of Defense to “track the implementation of climate and energy-related goals” and coordinate with the White House to ensure climate policies are carried out.

One would hope the group would approach climate change with supporting warfighters as its primary goal.

But the Biden administration appears to be taking the opposite course.

In a recent hearing of the House Appropriations subcommittee on defense, the ideas floated by former Obama and future Biden appointees indicate a move away from a capabilities approach toward a thinly veiled “leading by example” approach for the Department of Defense.

Their proposals—prioritizing certain food suppliers for business practices in regenerative agriculture, contractors who produce “green steel and concrete,” and incorporating recycled carbon fibers in defense platforms—may promise small improvements in the Pentagon’s carbon footprint, but would divert funds away from already tight program budgets without any gains in military capability.

“Leading by example” in every social or economic issue is not the Defense Department’s job. Going forward, action in the Pentagon on climate change must support the warfighter, not float an expensive “Green Fleet,” procure hundreds of thousands of electric vehicles, or reduce readiness for modest reductions in greenhouse gas emissions.

The bottom line is simple: Projects to reduce emissions from the Department of Defense would not resolve the strategic challenges of climate change, but they would become sinkholes for crucial defense funding.

Former Secretary of Defense Jim Mattis advised in his memoir “Call Sign Chaos: Learning to Lead” to “be brilliant in the basics.”

“Don’t dabble in your job; you must master it,” Mattis wrote.

In the face of their adversaries, the Department of Defense and the American warfighter simply cannot afford a different approach.