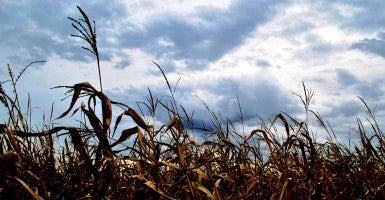 This week, the Environmental Protection Agency announced its biofuels targets for 2014-16 as part of the Renewable Fuels Standard passed in 2005.

In the interest of forcing biofuels into the market, the agency now will require 17.4 billion gallons of biofuels be produced in 2016, 14 million of which can be corn-based ethanol.

The proposal directly admits how bad the federal government is at central planning and how little business it has setting production quotas. The Environmental Protection Agency acknowledges, “Due to constraints in the fuel market to accommodate increasing volumes of ethanol, along with limits on the availability of non-ethanol renewable fuels, the volume targets specified by Congress in the Clean Air Act for 2014, 2015 and 2016 cannot be achieved.”

The government has grossly underestimated the target for cellulosic (nonfood-based) ethanol and has teetered on  the verge of requiring too much corn-based ethanol, driving energy costs even higher. In its proposal, the agency identifies these constraints as its reasoning for the lower-than-initially-projected targets.

That’s right. They increased the goal even though they know it cannot be achieved because of:

No one should be surprised by the futility of the mandate or the inability of the government to predict what the market will bear. The mandate hurts all consumers of food and fuel, which is pretty much everyone.

Most of the ethanol comes from corn. This artificially raises the cost for drivers because ethanol is less efficient and ultimately costs more, and it has been proven to be harmful to smaller engines. Additionally, the mandate drives up food prices because corn is a staple food in many countries as well as a staple feed for livestock. Environmental organizations have raised concerns over additional emissions because of land-use conversions as a result of the mandate.

When initially concocted in 2005, the Renewable Fuel Standard promised less dependence on foreign oil, lower fuel prices and fewer greenhouse gas emissions. A decade later, the production quota has failed to deliver on any of these promises. Instead, the mandate delivered benefits to politically connected producers and higher costs to America’s energy consumers.

Rather than recognize the ethanol program is a loss for the economy and the environment, the federal government keeps trying to fit a square peg into a round circle. Congress should scrap the program altogether.