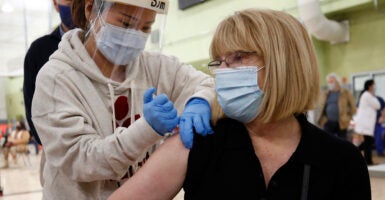 When the Centers for Disease Control and Prevention released its school reopening guidance in February, teachers unions lauded the new regulations. But one union’s plaudits likely didn’t come as a surprise to government officials, since it helped write at least two of those guidelines.

The nonprofit watchdog group Americans for Public Trust, through a Freedom of Information Act request, obtained email exchanges between the CDC’s top officials and American Federation of Teachers’ bosses leading up to the February guidance.

In their emails, the union described itself as the CDC’s “thought partner” as the agency developed school reopening guidance.

In the email correspondence, Kelly Trautner, the American Federation of Teachers’ senior director of health issues, argued that agency guidelines should include this caveat: “In the event of high community-transmission results from a new variant of SARS-CoV-2, a new update of these guidelines may be necessary.”

The New York Post reported that Trautner’s language was included in the CDC’s final guidance on Page 22.

The teachers union also influenced the CDC guidance pertaining to special remote work opportunities for teachers who either “have documented high-risk conditions or who are at increased risk for … COVID-19” or who are “staff who have a household member” who is at increased risk.

While American Federation of Teachers President Randi Weingarten brushed off the emails as “routine” correspondence, The 74’s Mike Antonucci noted that Weingarten’s own words capture the conundrum: “The problem is that it’s routine,” he wrote. This “routine” correspondence illustrates the all-too-common occurrence of teacher union lobbying setting the tone for agency guidelines.

Unlike unionized workers in the private sector, teachers union “members’ jobs were government jobs, their bosses were elected officials,” he explained. “This meant that by wielding power in elections, the unions could literally elect their own bosses—and ensure, so far as possible, that they would be bargaining with allies.”

Teachers unions have long used their political clout to stifle innovations that could improve U.S. education, such as charter schools, school choice, or hybrid education options, and have supported political candidates who favor teachers union interests.

For instance, between 2019 and 2020, the largest teachers unions—the American Federation of Teachers and the National Education Association—collectively gave more than $6.7 million to Democratic candidates, whereas Republican candidates received less than 2% of that amount.

Teachers union interference in politics to block education reforms—such as private school scholarships or charter schools—that could threaten union jobs isn’t new, however. For instance, unions were instrumental during the Obama administration in the “unabashed dismantling” of the D.C. Opportunity Scholarship Program, a private school scholarship for low-income students residing in the nation’s capital.

Even in the midst of a global pandemic, teachers unions have not been afraid to use political victories to their advantage.

For instance, teachers unions demanded coronavirus vaccination priority for their members. Hoping to expedite school reopenings, all states except Montana made teachers eligible for the vaccine by the end of March. According to the CDC, nearly 80% of teachers, school staff, and child care providers had received at least one dose of the vaccine as of April 6.

At the same time, the Biden administration’s infrastructure proposal, widely lauded by teachers unions, would deliver hundreds of billions of new federal dollars for school improvements and additional nonteaching staff.

However, these proposals are more likely to ingratiate politicians with union leadership than help children get back to school.

At the same time, education researchers have long turned a blind eye to school district fraud. Instead of bailing out district school leaders for bad decisions and unethical behavior, “State lawmakers should require school districts to clean up the books before policymakers look for ways to spend more from the budget on K-12 district schools,” wrote The Heritage Foundation’s Jonathan Butcher.

Instead of burdening future taxpayers by financially bolstering failing institutions, better policies would provide families with greater education flexibility through private school scholarships, open enrollment, and education savings accounts—all of which have been blocked by the teachers unions over time.

While a flurry of school choice proposals passed in nine states this year rebuked teacher unions’ meddling, it should not take a global pandemic to make meaningful education reform happen.

Moving forward, policymakers should ensure that policies are not shaped by teachers unions’ self-interests.

Specifically, states should make sure that teachers know that they are no longer required to become union members, in keeping with the Supreme Court’s Janus ruling.

At the same time, more states should empower families with greater education choice, such as education savings accounts or open enrollment. Student-centered education funding is the key to breaking the union monopoly and giving parents a greater role in education decision-making.

Policymakers should collaborate with families to ensure that education reforms aim to help children, not protect union jobs.