In a Rebuke to Teachers Unions, School Choice Is Going Gangbusters in the States 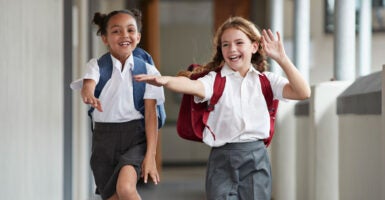 After public schools and teachers unions proved that they could not or would not meet the needs of students during the pandemic, multiple state legislatures are collectively undertaking one of the biggest expansions of school choice in history. (Photo: Klaus Vedfelt/Getty Images)

School districts are slowly beginning to reopen in-person instruction after being closed for nearly a year—or, in many places, for over a year. While this is a wonderful development, it will never erase what parents experienced last year: uncertainty, inconsistency, and, in some cases, ineptitude from public schools.

The events of the last year have demonstrated to many families that public schools are not always the reliable institutions many thought they were. It also opened their eyes to just how powerful the teachers unions are, and revealed what many already suspected: that their modus operandi is not to support teachers who want to teach but to score political wins.

Thankfully, in response to these disappointments, multiple state legislatures are undertaking one of the biggest expansions of school choice in history. Here are some states to watch:

This is monumental. It is the nation’s first universal education savings account program open to all children in the state. Students who choose to participate in the education savings account option will receive 100% of what the state would have spent on their education in their prior public school—or approximately $4,600 per year—which they can then use to pay for private school tuition, online learning, private tutoring, and a variety of other education services, products, and providers.

All incoming kindergarteners will be eligible for an education savings account, as will all first through 12th graders, with the condition that they have previously been enrolled in a West Virginia public school for 45 days.

Known as Education Opportunity Accounts, students from families with incomes below 175% of the federal poverty line will have access to education savings accounts. The program is available to students living in counties with more than 90,000 residents and will initially be capped at $25 million.

Students from families whose income does not exceed 150% of the qualifying amount for free and reduced-price lunch eligibility (approximately $73,000 for a family of four) are eligible. The Legislature expanded the program to now include students who already attend private school.

Georgia. Gov. Brian Kemp will soon have on his desk a bill that expands eligibility for the state’s existing voucher program for students with special needs. The proposal would expand eligibility to students in public schools with 504 plans (meaning they may need additional help in school due to learning impediments).

Approximately 58,000 Georgia students currently have 504 plans and would be eligible for the expanded voucher program.

The proposal would bring the flexibility and customization of education savings accounts to the existing voucher and tax credit scholarship programs, updating the current school choice programs.

The proposal also grows program eligibility by eliminating the prior public school attendance requirements and opening the education savings account program to low-income homeschooled students in the state.

Arizona. In Arizona, the Legislature is considering an expansion of the state’s existing (first-in-the-nation) education savings account program to include students who attend a low-income school.

It would also make students who live in the attendance zone boundary of a Title I school eligible for the accounts. An estimated 65% of school districts in Arizona are home to Title I schools.

Missouri. Missouri lawmakers have introduced a bill to create a tax credit-funded education savings account program with broad eligibility. The program would be open to all students who previously attended public school in Missouri, or are entering kindergarteners, or who have an active-duty military parent. The program would initially be capped at $50 million.

Indiana. In Indiana, policymakers have introduced a measure that would expand eligibility for the state’s existing school voucher program and would create education savings accounts.

Children with special needs, from military families, or from foster families would be eligible for an education savings account worth 90% of what the state would have spent on that child in their public school.

In addition to these nine states, dozens of others are considering measures to expand education freedom and opportunity to students. An unprecedented 29 states have already introduced similar measures this year that will create or expand vouchers, tax credit scholarships, and education savings accounts, according to the Educational Freedom Institute.

According to EdChoice, more than 20 of those states have introduced education savings account options specifically. For families, these proposals represent lifelines to opportunities previously unavailable to them in their public school.

These measures are a swift rebuke to the teachers unions, who have not only stood in the way of education access during the pandemic, but have been the primary obstacles to education choice for decades.