Unions Are Keeping Students and Teachers Out of the Classroom. Here’s What Lawmakers Can Do About It. 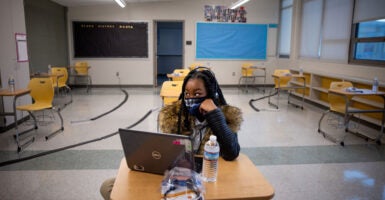 Teachers unions around the country are refusing to return to in-person teaching, despite calls from state and local officials to return to classrooms. Pictured: A sixth grade student is the only student in her class at John Hayden Middle School in Washington, D.C., on Feb. 5. (Photo: Evelyn Hockstein/for The Washington Post/Getty Images)

President Joe Biden’s administration pledged that at least half of K-12 schools in the U.S. will offer in-person learning at least one day per week within his first 100 days in office.

Research using a representative sample of school districts finds that 44% of districts were already offering in-person learning in December 2020, so the administration’s proposal is hardly a stretch.

Yet for weeks, Chicago’s teachers union told members not to return to work in person and postponed reopening for K-8 students until next month, with no plan for high school students to return.

In Philadelphia, the same process is unfolding now: The district called teachers back to work in person, the union said no, and as of last week, Philadelphia Mayor Jim Kenney had backed off.

Last summer, the American Federation of Teachers announced it would support local chapters if they chose to strike during the pandemic. Since teachers unions have not found any reopening plans that are to their liking, parents, district officials, and state policymakers are left wondering what they can do when unions tell teachers to reject state or local officials’ calls to return to work in-person.

Most state lawmakers are back in session now, so legislators should consider the following proposals immediately when unions refuse employers’ plans to help students by offering in-person learning:

Immediately offer open enrollment. Students should be allowed to leave their assigned school and transfer to any public school in the state. Florida and Arizona already have policies in place that allow parents to find a traditional option for their child that meets their needs.

Automatically lift caps on charter school creation and enrollment. Collective bargaining agreements between unions and districts in places such as Chicago and Los Angeles have capped charter school growth.

Charter schools already serve a larger share of students from low-income families and minority students than traditional schools, as a percent of total enrollment—the very students who are more likely to be from disadvantaged backgrounds and need additional help, especially during the pandemic.

If unions keep teachers out of traditional buildings, then policymakers should make the creation of other public options possible right away.

In West Virginia, home to the nation’s most recently-enacted charter school proposal, unions effectively limited the number of parents who could speak at a public hearing last fall to consider a charter school application.

Just three charters can be created before 2023. Unions have orchestrated strikes in 2018 and 2019 there, so policymakers should consider removing the cap on the number of charter schools that officials can approve statewide should unions strike again.

Today, as unions are now telling members to refuse policymakers’ calls to return to work in person, state legislators should, according to their state laws, suspend striking teacher salaries, and hire substitutes who are willing to work in person.

Any savings for the state should then revert to state coffers, and lawmakers could use these resources to create education savings accounts and to provide scholarships for students to attend K-12 private schools.

In Pennsylvania, the Commonwealth Foundation reports that half of all scholarship applications in the state’s private school scholarship system have been rejected since 2012 because of “program limits,” such as caps on student participation. Caps such as these should be lifted when unions refuse policymakers’ calls for in-person learning.

When it comes to reopening classrooms, we have to give teachers, parents, and lawmakers options. Some teachers may be ready to return to work, irrespective of the union’s position. A growing list of studies finds that schools are not super-spreaders and even that the transmission rates are far lower in schools than in the surrounding communities.

If parents are not prepared to send their children back in person, that should be their choice. If teachers have health issues that put them at risk, school officials can handle these cases individually as needed. But if unions tell an entire chapter not to return in person, then special interest groups are acting as though lawmakers have no choice but to comply with the unions’ wishes.

Lawmakers have options—options that would help students.