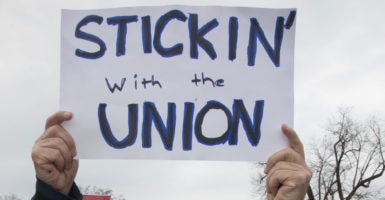 In February, this sign was held up by a protester at the Supreme Court during the day of oral arguments for Janus v. American Federation of State, County, and Municipal Employees (AFSCME). (Photo: Jeff Malet Photography/Newscom)

In a win for individual liberty, the Supreme Court on Wednesday ruled, in a much-anticipated decision in Janus v. AFSCME, that public employees will no longer be required to pay involuntary agency fees to special-interest groups.

As a result of the Janus decision, public-sector employees, such as teachers, can now opt in to paying agency fees, instead of being forced to support a union against their will.

By losing their monopoly, Nat Malkus and Brendan Bell wrote, “Teachers’ unions will likely [have to reprioritize] their activities, perhaps by reducing national advocacy and redoubling their efforts to serve members at the local level.”

Reprioritization could mean that unions will be less likely to spend what could become significantly reduced revenue on issues that don’t pertain directly to their members, such as lobbying against education choice for families or spending hundreds of thousands of dollars on political causes with which teachers may disagree.

With agency fees and dues, the National Education Association contributed to legal groups, such as the Center for American Progress, Media Matters, and Moveon.org, even though these groups’ activities likely conflict with the political beliefs of more than a quarter of teachers.

In some states, teachers who object to the political activism of their unions can already opt out of union membership, but are still mandated to subsidize a union-approved charity.

For example, Linda Misja, a Pennsylvania teacher for more than 30 years, opted out of the Pennsylvania State Education Association membership because she objected to its staunch support of Planned Parenthood. Yet, the union rejected her proposal to donate her agency fees to a pro-life charity, and suggested that she instead consider a pregnancy center open to “all options.”

Misja argues that her so-called “voluntary deduction” is not voluntary if the very organization she refuses to join can cherry-pick its favorite charities.

A survey by Educators for Excellence found that 72 percent of teachers think that they are unrepresented by unions. Teacher frustration was highlighted in 2012, when Michigan state law made mandatory agency fees illegal, and the Michigan Education Association membership shrunk by 25 percent over the next five years. Similarly, Wisconsin’s NEA membership dropped by nearly 60 percent after the elimination of agency fees.

If the mass exodus from Michigan’s and Wisconsin’s unions is an accurate gauge, national public-sector unions could face a significant membership loss. However, weakened national unions may further empower teachers at the local level, who will be less tightly tied to national agendas.

In the post-Janus era, union success will depend on teachers actually choosing to pay dues and agency fees. That’s not the only choice that could be increased as a result of Wednesday’s decision.

Through school choice, state funding follows individual children, and parents, unhappy with school performance or in need of options that are a better fit for their child, select schools—including nonpublic options—that suit their children’s individual needs and goals.

Children are no longer relegated to underperforming schools that happen to be located in their neighborhood. That’s something the unions see as a threat to their power.

Moe noted that when a philanthropist offered to fund 15 Detroit charter schools in 2006, “[The teachers union] shut down the Detroit schools for a day, sent its members to demonstrate outside the state Capitol in Lansing, and convinced the politicians to turn down the $200 million. The free money was lost.”

Moe’s example illustrates how teachers’ unions are more interested in protecting the jobs of teachers than allowing children to escape from some of the poorest-performing schools in the country.

Teachers unions aren’t going away anytime soon, but now hopefully they will have a weakened capacity to block policies that are in the best interest of teachers and students alike.