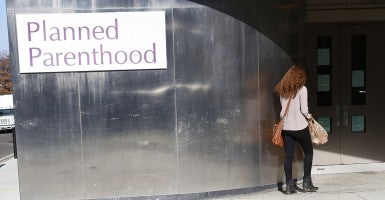 A Pennsylvania teacher is suing the state’s largest teachers union, the Pennsylvania State Education Association, for preventing her from donating her nonmember fees to a pro-life charity.

In an interview with The Daily Signal, Linda Misja, a teacher at Apollo-Ridge High School, said she has never paid for representation by the union, which she does not want.

She said joining the union would violate her religious beliefs.

Misja, a devout Catholic, objects to the union’s decision to donate to Planned Parenthood, the nation’s largest abortion provider.

“I support people’s right to choose to be in a union, but the union’s politics violate my faith, and the law in Pennsylvania allows me to honor my faith.”

Misja applied to become a religious objector, and was approved. Under Pennsylvania law, unions are able to extract nonmember fees from teachers, but religious objectors are permitted to donate funds equivalent to union dues to charity.

Misja selected a local pro-life pregnancy resource center, the New Castle chapter of People Concerned for the Unborn Child, where she has volunteered to teach young women facing unexpected pregnancies.

The union, however, rejected her choice of charity because it “furthers” her “religious beliefs.”

“They said this charity would ‘further my religious beliefs,’” Misja said. “Helping young women who have already made a hard choice is not furthering my beliefs. It is doing the morally correct thing to do: help young people. Never in my life before have I had enough spare change to donate to a good charity like this, and so this denial hurts even more to me personally. I have been poor, been on public assistance, I have known how hard it is to make ends meet, and so I wanted my money to help locally so that I could know where it was and what good it may be doing.” Linda Misja is suing the Pennsylvania State Education Association for rejecting her choice of charity for her nonmember union fees. (Photo courtesy of Linda Misja)

She said the union is “cherry-picking which charities I can donate my money to.”

“That’s my money, and the people who need it aren’t getting it.”

The funds taken from Misja’s paycheck have been sitting in an escrow account maintained by the PSEA for three years.

“My paycheck says ‘voluntary deduction,’” Misja said. “I assure you, it’s not voluntary.”

“The point for me is simple, this case is about my individual freedom as an American and as guaranteed under the Constitution. I am for the freedom of all teachers to choose to associate or not. I support people’s rights to choose to be in a union, but the union’s politics violate my faith, and the law in Pennsylvania allows me to honor my faith. I demand a full accounting of where my forcibly-taken monies have gone and what they have supported.”

Misja said that the recent release of several undercover videos showing Planned Parenthood executives discussing the sale of fetal organs has only strengthened her resolve to have the union honor her choice of charity.

“I have been watching the horrific Planned Parenthood videos and am even further appalled that any part of my forced teacher union contributions are going to fund not only the butchering of innocent human babies but the sale of their body parts,” Misja said.

“I believe teachers may be unaware that their union dues, forced or voluntary, support such atrocious practice against the most vulnerable and innocent in our society. Teachers need to thoroughly investigate what their dues support.”

“Freedom, to me, is having the choice to not donate to causes that violate one’s deeply held moral beliefs,” Misja said. “The murder of babies and the sale of their precious body for profit violates my beliefs.”

Misja said that she has a right to direct her own funds where she sees fit.

“It’s all I want to do, to teach and to teach well. I will not give up my fight, and now, I feel even more strongly that I cannot.”

“Government unions have become highly politicized,” Sherk said. “The union objected to money going to a charity that helps women in crisis pregnancies simply because that charity did not endorse abortion. Teachers should have the freedom to spend—or give away—their money as they see fit. They should not be forced to pay dues to a union that fights against their most deeply held beliefs, nor should unions get a veto over where forgone dues get redirected.”