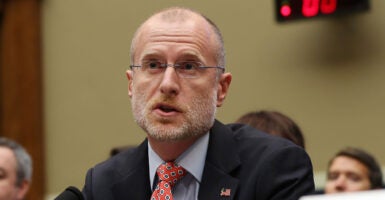 The senior Republican on the Federal Communications Commission criticized the Democratic Baltimore City state attorney’s recent request for an investigation into a local Fox affiliate as an attack on free speech.

Brendan Carr, the top Republican on the Federal Communications Commission, condemned Baltimore City State Attorney Marilyn Mosby’s request, saying it was part of a broader effort by Democrats to censor news coverage and political speech they don’t like. Carr demanded that the commission dismiss Mosby’s complaint by the end of the day “with prejudice.”

“The State’s Attorney’s Office, led by Democrat Marilyn Mosby, has launched a chilling and direct attack on free speech and journalistic freedom,” Carr said in a statement Monday. “The complaint her office filed with the FCC asks the Commission to censor a newsroom simply because journalists are doing their constitutionally protected jobs and shining a light on the work of the State’s Attorney.”

“Invoking the power of the state to silence journalists for unfavorable coverage strikes at the very heart of the First Amendment,” he continued.

Last week, Mosby asked the FCC to investigate local Fox affiliate WBFF-TV over its alleged distortion of the news and bias against her in a letter to acting FCC Chairwoman Jessica Rosenworcel. Mosby alleged that the outlet’s coverage of her was more negative than other outlets’ coverage and that it presented a physical threat to her, making it a violation of FCC rules.

“The coverage by the WBFF represents acts that are not merely against the public interest; they also represent acts that are inflammatory against the safety of an elected official,” Mosby’s communications director, Zy Richardson, wrote in the letter.

But, Carr noted that Mosby’s request was particularly disturbing given that much of WBFF’s coverage, which Mosby alleged was biased, was about an ongoing federal grand jury investigation into her office’s potentially illegal financial dealings.

He added that WBFF has recently won four Regional Edward R. Murrow awards for journalism excellence. One of the stories to receive an award was about Mosby.

“Local journalists across the country have a Constitutionally guaranteed obligation to serve their communities by seeking and reporting the truth, often by reporting on the public activities of public officials,” Dan Shelley, executive director of the Radio Television Digital News Association, said in a statement.

The FCC and Mosby’s office didn’t respond to a request for comment.