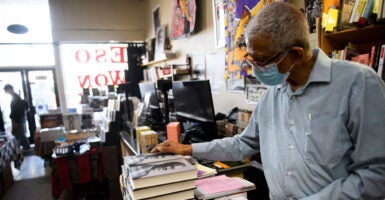 Addressing a joint session of Congress on April 28, Biden said that “with the plans outlined tonight, we have a real chance to root out systemic racism that plagues America and American lives.” On Feb. 17, Biden told a CNN town hall: “I think we have to deal with systemic racism that exists throughout society.”

For her part, Harris said last month, “America has a long history of systemic racism.”

Are there racists in America?

So long as any hue distinguishes one American from another, some lighter people (and some darker folks, too) will consider themselves superior.

But it’s past time for the Democrat left to concede that, amid ample historical pain, Americans have labored mightily to dismantle slavery, segregation, and truly systemic racism.

Meanwhile, myriad blacks have let none of this derail their dreams.

This entire, rancorous debate should refocus on three words:

What a volcano of rubbish.

Blacks also have succeeded in the private sector, since Republican Abraham Lincoln signed the Emancipation Proclamation, crushed the Democrat-run Confederacy, and terminated slavery.

How do these black Americans and so many more flourish in a “systemically racist” nation? Wouldn’t such a racist system reserve such riches for whites, deny them to blacks, and stomp on uppity blacks who forget their place?

That system was buried in 1964—57 years ago. And the Democrat left must stop unearthing Jim Crow’s ghost to tell blacks: “No, you can’t.”

The left foments racial strife, to rip this republic to pieces. This is the only thing the Democrat Party still does well.

Instead, Americans should celebrate and cultivate black success, because Black Success Matters.