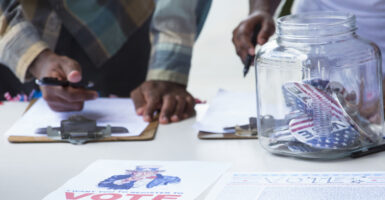 Politicians are trying to manipulate black folks into thinking that voting reforms that actually protect our right to vote are somehow racist. (Photo: Ariel Skelley/Getty Images)

As a black woman who grew up in the segregated South, I’m shocked and appalled with the race-baiting from mostly white left-wing politicians who are throwing around the “Jim Crow” label to score political points in the debate over strengthening our voting laws.

To paraphrase Lloyd Bentsen’s line from the 1988 vice presidential debate with Dan Quayle: I knew Jim Crow. Jim Crow was no friend of mine. And these commonsense voting laws that states are adopting are no Jim Crow.

Frankly, it’s insulting that politicians are trying to manipulate black folks like me into thinking that voting reforms that actually protect our right to vote are somehow racist. It’s insulting to be lied to, and—yes, I’m going to say it—it seems awfully racist to be thought of as so ignorant and gullible.

These state election reforms are about one thing—making it easier for American citizens to vote, while making it harder for cheaters to cheat.

Yet everyone from President Joe Biden to The New York Times to Coca-Cola and those in Hollywood are labeling voting reforms adopted in Georgia and other states as voter suppression and the new Jim Crow. There’s even a Senate hearing this week being held around this lie called, “Jim Crow 2021: The Latest Assault on the Right to Vote.”

Growing up as a black teenager during the 1960s, I knew the tremendous sacrifices and the dangers that my friends and relatives endured to secure the right to vote for black Americans. I myself was part of the civil rights movement when I was thrust into an effort to desegregate my middle school in Richmond, Virginia.

So let me be perfectly clear: I have zero interest in disenfranchising or suppressing the vote of any portion of the population.

But that’s not what’s happening in Georgia or other states pursuing election reforms. And don’t let anyone tell you otherwise.

As we’ve heard from the few truth tellers there are in the media, the new Georgia election reform doesn’t discourage voting or suppress votes. In fact, the availability of absentee ballots and early voting is a lot more robust than what it is in most “blue” states.

And Georgia provides a free voter ID to people without ID and has exceptions that mirror federal law. Turnout in the state as well as studies also show that ID requirements don’t suppress votes; and polling shows that voters, including black voters, agree that voter ID is a commonsense reform. Claims that black people are somehow unable or unwilling to obtain identification are insulting and have no basis in fact.

“You know what’s racist? Assuming because I’m black that ‘I just don’t have the capability of getting an I-D,’” Rep. Burgess Owens, R-Utah, recently tweeted. I couldn’t agree more.

So why is the left calling these reforms racist? It’s a scare tactic and an attempt to rally support for a voting bill currently in Congress ironically called the For the People Act, or HR 1.

HR 1 would create a federal takeover of elections and force changes to election laws that would actually allow for greater fraud and election tampering. It would diminish the very voting rights that my relatives in the 1960s, the women suffragists of the early 1900s, and the men and women of the armed forces throughout our history fought so hard to gain and protect.

Under HR 1, no one has to prove they are who they say they are in order to vote. It’s likely to automatically add ineligible individuals like noncitizens to the voter rolls. And it outlaws or restricts safeguards that help states maintain accurate voter rolls to prevent people from voting twice. In other words, it would allow illegal votes to cancel out our legal ones.

And that’s just scratching the surface of this terrible law.

HR 1 isn’t for the people; it’s about creating more power for certain politicians. The people who support this bill expect that most illegal votes will favor left-wing politicians, and they are willing to dilute our legal votes by encouraging more illegal ones.

They are lying and calling commonsense voter protections racist to make people think that there is a groundswell of voter suppression coming from the states so that they can pretend to save us all with HR 1. But they aren’t really interested in protecting us; all they are interested in is helping themselves.

The right to vote is one of the most sacred rights that we as free citizens can exercise. That’s why we must protect it and not allow politicians to get away with pushing sinister bills like HR 1 that would diminish that right.

Free and fair elections are the cornerstone of our republic, and every citizen—no matter their color, ethnicity, background, or political persuasion—must be able to trust the voting process and its results.

The very future of a free nation depends on it.