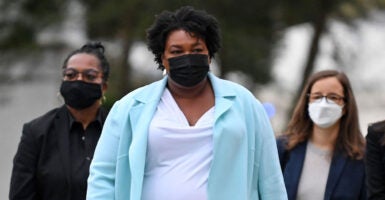 Stacey Abrams, center, has been a leading opponent of Georgia’s new election integrity law. Many of the law’s critics are spreading disinformation about what it is actually about—which is to make it easier for American citizens to vote, while making it harder to cheat. (Photo: Eric Baradat/AFP/Getty Images)

The Heritage Foundation released a fact check Friday of some of the most egregious lies being echoed by members of Congress, the media, Hollywood, and corporate America about the new election integrity reform in Georgia. These reforms are about one thing—making it easier for American citizens to vote, while making it harder to cheat.

The Truth: Jason Snead, executive director of the Honest Elections Project, said, “Overall, the Georgia law is pretty much in the mainstream and is not regressive or restrictive. The availability of absentee ballots and early voting is a lot more progressive than what’s in the blue states.” The Heritage Foundation recently validated this statement by comparing Georgia’s law to other states’.

Despite President Joe Biden’s and other’s false claim that the time period for voting would be restricted, it is not the case that voting must finish at 5 p.m. Counties can set hours anywhere between 7 a.m. and 7 p.m. (see line 1446-1447 of the law).

The Truth: The law makes no distinctions based on race. Comparisons to Jim Crow laws—which included segregation, poll taxes, grandfather clauses, and literacy tests—are historically ignorant and diminish the suffering caused by such laws.

The Truth: The Georgia law’s voter ID language is not onerous, and makes exceptions for people without ID to provide their Social Security number (line 1244 of the law). Furthermore, ID requirements do not suppress voters, as studies have shown. Claims that African Americans are unable or unwilling to obtain identification are insulting and have no factual basis.

Myth 4: The bill bans access to water for voters while waiting in line.

The Truth: The law allows for self-service water from an unattended receptacle (see line 1828 of the law). The law protects voters from political solicitation within 150 feet of a voting building (see line 1818 of the law). Voters are of course allowed to bring water with them.