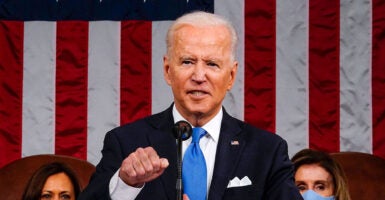 President Joe Biden delivered his first address to a joint session of a downsized Congress on Wednesday night, nearly 100 days into his presidency.

Biden spoke to only 200 masked lawmakers in the spacious House chamber, even though most, if not all, members of Congress have been vaccinated for COVID-19 and federal health guidelines don’t require such masking and distancing precautions.

The president fist-bumped senators and representatives on his way to the podium, where he delivered his address as Vice President Kamala Harris and House Speaker Nancy Pelosi sat behind him, keeping their masks on.

“One hundred days ago, America’s house was on fire,” Biden said early on. “We had to act.”

Speaking for just over an hour, Biden talked about numerous issues on his agenda—but wasn’t always truthful.

Here’s a look at seven instances where setting the record straight may help those evaluating the speech.

1. ‘Protect the Sacred Right to Vote’

“And if we are to truly restore the soul of America, we need to protect the sacred right to vote. More people voted in the last presidential election than ever before in our history—in the middle of one of the worst pandemics ever. That should be celebrated. Instead it’s being attacked.”

About 160 million Americans voted in the presidential election in November, a record number, USA Today reported.

But conservatives say the left is out to nationalize elections by giving the federal government control over local and state elections, what the president apparently meant when he said voter turnout is “being attacked.”

Congressional Democrats’ legislation, which they call the For the People Act, would override states’ authority to conduct their elections, mandate “no fault” absentee ballots, and make it easier “to commit fraud and promote chaos at the polls through same-day registration,” according to a backgrounder from The Heritage Foundation.

Democrats’ legislation, known in the House as HR 1 and in the Senate as S 1, also would mandate that states allow 16- and 17-year-olds to register to vote. This move, “when combined with a ban on voter ID and restrictions on the ability to challenge the eligibility of a voter … would effectively ensure that underage individuals could vote with impunity,” Heritage’s paper says.

The legislation also would provide taxpayer money for candidates for federal office, require nonprofits to disclose donors, mandate that states allow voter registration on Election Day, allow felons to vote, and allow ballots to be counted outside voters’ home precincts.

“Congress should pass HR 1 and the John Lewis Voting Rights Act and send them to my desk right away,” Biden said. “The country supports it. Congress should act.”

Biden is partly correct on this point. An Associated Press poll in April found that about half of those surveyed said they support expanding access to early and mail-in voting, which HR 1 and S 1 would do.

However, the legislation also would eliminate most state voter ID laws, which require anyone who wants to vote to first show a recognized form of identification.

A Fox News poll this week found that 77% of Americans say “a valid form of state or federally issued photo identification to prove U.S. citizenship” should be required for voting.

“Look at the big tax cut in 2017. It was supposed to pay for itself and generate vast economic growth. Instead it added $2 trillion to the deficit.”

In his speech, Biden pushed for tax increases for high earners and corporations, and took a shot at the tax reform law passed by Congress and signed by President Donald Trump just before Christmas 2017.

As noted in an analysis last month published by The Daily Signal, the Trump tax cuts did not pay for themselves. But the tax cuts were not the cause of the budget deficit.

The tax cuts helped to grow the economy, but not enough to shrink the deficit—which is caused by spending, former Heritage tax expert Adam Michel noted in the analysis.

Annual budget deficits primarily are the result of a systemic gap between revenues and expenditures resulting from sustained growth in mandatory spending programs since the 1970s.

If Congress undoes the 2017 tax cuts, the deficit would continue to grow. The tax cuts represent only about 16% of the pre-pandemic budget deficit.

The projected annual deficit in 2030 is bigger than the entire 10-year cost of the Trump tax cuts from 2017.

After the tax cuts, the economy grew, the labor market improved, and wages increased by more than a percentage point in the two subsequent years, resulting in annual wages of more than $1,400 above trend for production and nonsupervisory workers.

New job openings increased in 2018, and about 83,000 more Americans voluntarily left their jobs for better opportunities at the end of 2019 and before the COVID-19 pandemic struck in early 2020.

According to data from the Internal Revenue Service, Americans in every income group benefited from lower effective tax rates, which dropped 1.4 percentage points in 2018.

The tax cuts that took effect in 2018, as a percentage of taxes paid in 2017, were largest for the lowest-income Americans and smallest for the top 1% of earners. This means high-income Americans now pay a larger share of income taxes than they did before the Trump tax cuts.

“I will not impose any tax increases on people making less than $400,000 a year. … We’re going to reform corporate taxes so they [corporations] pay their fair share—and help pay for the public investments their businesses will benefit from.”

Between 75% and 100% of corporate tax increases are passed onto workers through lower wages and less investment, according to past analysis from Congress’ Joint Committee on Taxation, the U.S. Department of the Treasury’s Office of Tax Analysis, and the Congressional Budget Office.

Raising corporate taxes could also mean higher prices, since the cost of doing business can be passed on to consumers, according to a July 2020 study by the libertarian Cato Institute. The study determined that every one percentage point increase in the corporate tax rate brings a 0.17% increase in the price of a retail product.

These estimates indicate that, even without tax hikes for “people making less than $400,000 a year,” those Americans would be affected by the higher taxes on other Americans.

“[So-called ghost guns] are homemade guns built from a kit that includes the directions on how to finish the firearm. The parts have no serial numbers, so when they show up at a crime scene, they can’t be traced.”

Biden, noting that he already has called for a ban on “ghost guns,” asked Senate Republicans to close loopholes on background checks to purchase a gun and again ban high-capacity magazines.

“I will do everything in my power to protect the American people from this epidemic of gun violence,” the president said. “But it’s time for Congress to act as well.”

Gun crimes actually are down from the early 1990s, when Congress passed several gun control laws, according to the Pew Research Center.

Amy Swearer, a legal fellow at The Heritage Foundation, wrote:

Despite Biden’s calling his proposal an infrastructure bill, less than 6% of the spending in it would go to building or repairing roads, bridges, and other projects typically associated with infrastructure, according to a Fox News analysis.

Referring to a White House summary, the Fox News analysis said the proposed American Jobs Plan, with a price tag of over $2 trillion, would spend only $115 billion to modernize bridges, highways, and roads.

The proposal includes hundreds of billions in other spending, such as $400 billion for home-based elder care; $35 billion for climate change research; $50 billion for “research infrastructure” at the National Science Foundation; and $213 billion for “home sustainability” and public housing.

Biden did surpass his initially stated goal of a million vaccine doses given per day. However, according to a Washington Post analysis published two days after Biden’s inauguration, the Trump administration already was closing in on that target with nearly 1 million vaccinations administered per day.

The Post analysis noted “greater manufacturing certainty and the increased pace of inoculations in the final days of the Trump administration.”

Even with vaccine shortages and bottlenecks in delivery, the pace needed to meet the new administration’s goal—1 million doses administered per day—was already achieved [Jan. 22] and four other days of the previous eight, according to Washington Post data. The accelerating speed of the program undercuts assertions by some Biden advisers that they were left no plan by the Trump administration and suggests they need only to keep their feet on the pedal to clear the bar they set for themselves.

Studies cast doubt on the effectiveness of government-funded prekindergarten programs.

In 2012, for example, a Department of Health and Human Services study of Head Start tracked 5,000 3- and 4-year-old children through the end of third grade. The study found the program had little to no impact on parenting practices.

Researchers at Vanderbilt University evaluated Tennessee’s voluntary pre-K program. They reported no significant differences in achievement by the end of kindergarten.

Regarding “free” community college, England tried and discarded the idea of taxpayer-funded college after three decades encompassing the 1960s through the 1980s. Officials there determined that the program hurt low-income students when colleges capped enrollment.

Ken McIntyre contributed to this report, which was updated May 3 to include a reference to a study by the Cato Institute.