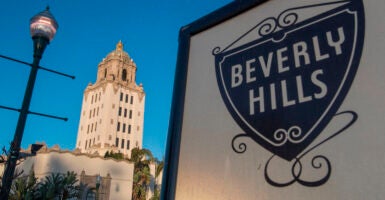 The website of the Beverly Hills city government touts the home of Hollywood celebrities as having “exceptional dining, entertainment, shopping and cultural experiences,” plus an “international reputation as a premier destination in which to live, work and play.”

But Mayor Lester Friedman complained in a March letter that Beverly Hills faces “one of the most precipitous declines in revenue in our city’s history,” and urged passage of congressional Democrats’ $1.9 trillion COVID-19 spending package.

Beverly Hills, with a population of about 35,000, got $6.3 million in federal tax dollars from the American Rescue Plan Act of 2021, according to an analysis by the fiscal watchdog group Open the Books. The rest of California also did quite well.

The analysis is based on data from the Congressional Research Service, a government agency.

On the East Coast, Greenwich, Connecticut—with a population of over 62,000 and also among the wealthiest U.S. localities—fared even better with $21 million.

About half of that money—$10.2 million—reportedly will go to public schools.

“It covers a lot and provides districts with a fair amount of flexibility as to how we spend that money,” Sean O’Keefe, chief operating officer of Greenwich Public Schools, told the local Board of Education in late March.

Greenwich is the home of Gov. Ned Lamont and Sen. Richard Blumenthal, both Connecticut Democrats.

All the municipalities on Bloomberg’s list of the 50 richest places received a total of $100 million worth of bailout aid under congressional Democrats’ American Rescue Plan Act, according to Open the Books.

The “stimulus” bill—so far the most significant legislation signed by President Joe Biden—included $350 billion in direct funding for state and local governments.

The 591-page American Rescue Plan Act also changed Congress’ normal formula for appropriating money. Rather than scaling funding by population, the measure awarded taxpayer dollars based on which states had the highest unemployment rates in the fourth quarter of 2020.

That shifted $31 billion in funding, according to Open the Books’ analysis, so that 27 states gained by the allocation change and 23 states lost money they would have gotten from the normal formula.

“There is a $31 billion shift and it has shifted to blue states,” Adam Andrzejewski, CEO of Open the Books, told The Daily Signal. “The big winners were California, New York, Illinois, New Jersey. Obviously Florida, which kept their economy open [under] Gov. Ron DeSantis, they continue to flourish. They lost money on that allocation change.”

DeSantis is a Republican. Under the congressional legislation, $10.1 million went to Key West, Florida, even though the state as a whole didn’t fare so well. Other wealthy conclaves receiving federal tax dollars include Oyster Bay, New York, which got $32.7 million, and Cambridge, Massachusetts, which got $65 million.

The city topping Bloomberg’s Richest Places index with a median income of $525,000—Atherton, California—scored $1.3 million from taxpayers. Scarsdale, New York, which is No. 2 on Bloomberg’s list and the wealthiest city on the East Coast—got $2 million. The third city on the list, Hillsborough, California, got $2.1 million.

In state allocations, liberal California gained an additional $6.7 billion, for $42.3 billion overall. The red state of Texas came in next with $27.3 billion, but didn’t gain under the new formula.

New York, another blue state, gained an additional $6 billion because of the allocation change, for a total of $23.5 billion. Tribal governments came in fourth place, with $20 billion.

Though it lost $2.3 billion in taxpayer money under the new formula, Florida’s population as the third-largest state allowed it to rank fifth with $17.3 billion.

The blue state of Illinois gained an extra $2.1 billion under the new formula, for a total of $13.5 billion.

The blue state of New Jersey collected an extra $2 billion, for a $10 billion total.

The biggest loser appears to have been Florida, which under normal circumstances would have gotten more than New York. Both Vermont (a blue state) and Wyoming (a red state) also lost $2 billion under the new funding formula, according to Open the Books.

“Over the last year, the federal government sent hundreds of billions in bailouts to states and local governments, well in excess of revenue losses caused by the COVID shutdowns,” Matthew Dickerson, director of the Hermann Center for the Federal Budget at The Heritage Foundation, told The Daily Signal.

“In many states, tax collections actually went up. It’s wrong for the taxpayers in states that acted responsibly to be bailing out the states that were the most irresponsible,” Dickerson said.

Dickerson noted that the state bailouts came with strings attached—worst of all, one prohibiting states that reduce taxes from taking the federal money.

Two states that stand out for having lost money under Congress’ reallocation formula are West Virginia, which lost $991 million, and Georgia, which lost $1.5 billion.

Yet, Andrzejewski noted, Senate Democrats Joe Manchin of West Virginia and Jon Ossoff and Raphael Warnock of Georgia voted for the rescue plan, which passed with a vote mostly along party lines.

“There are two states that aren’t being talked about. One is Joe Manchin’s West Virginia, which in the allocation change lost nearly $1 billion,” Andrzejewski said. “The two new senators from Georgia—Warnock and Ossoff—they weren’t held to account. Georgia lost $1.5 billion on the allocation shift. … They sent their dollars to the coasts. That can’t play well in Georgia and West Virginia.”

The Daily Signal sought comment Thursday from spokespersons for Manchin, Ossoff, and Warnock, but none responded.

Of the $350 billion in direct funding for state and local governments, the COVID-19 “stimulus” bill allocated $219.8 billion to states, territories, and tribal governments, according to the Congressional Research Service, a government agency. The awards were based on the “seasonally adjusted unemployed population from October through December 2020, as measured by the Bureau of Labor Statistics.”

The funding formula used in the American Rescue Plan Act should be avoided in future bills, Andrzejewski said.

“When you subsidize unemployment, what do you get? More of it,” Andrzejewski said, adding:

When you subsidize bad economic lockdown policies during a pandemic, what do you get? You get more bad decisions. There is no consequence for actions. … Governors that kept their state open, where their economies continued to flourish, they were punished.

The report by the Congressional Research Service says $195.3 billion went to the 50 states and the District of Columbia.

The legislation set aside $4.5 billion for the U.S. territories of Puerto Rico, American Samoa, Guam, the Northern Mariana Islands, and the U.S. Virgin Islands.

Tribal governments received $20 billion, according to the Congressional Research Service.

“There are roughly 600 tribal governments representing—they disclose—about 3 million members,” Andrzejewski said. “They outranked 46 states on the receipt of money from that bill.”

The Open the Books official compared this ranking to that of Puerto Rico, with a similar population total.

“Puerto Rico actually has 3 million residents. They got $4 billion,” Andrzejewski said. “There are 3 million members of the tribes, and they got $20 billion.”

Four of the top six U.S. counties in receiving money under the legislation were counties outside Washington, D.C., where many members of Congress and their staffers live.