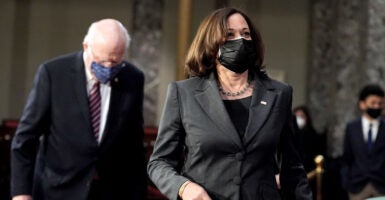 Democrats are poised to use Senate rules to pass a mostly partisan COVID-19 “stimulus” package, despite President Joe Biden’s appearing to be open to Republicans’ concerns earlier in the week about spending too much.

The House and Senate each passed separate spending measures Friday, and the legislation will go to a conference committee including members of both chambers. Biden has called for Congress to act quickly.

The Senate is using the so-called reconciliation process to push through what it calls the American Rescue Plan, a $1.9 trillion package that goes well beyond relief for the pandemic.

The details of the legislation haven’t been settled, but some on the left flank of the Democrats are pushing for expansive elements of the Green New Deal, universal basic income, and a public option for health insurance.

“If the Senate abuses the reconciliation process to jam through their laundry list of policy priorities, that’s the ‘nuclear option’ by another name,” Jessica Anderson, executive director of Heritage Action for America, said in a formal statement, adding:

Led by Sen. Bernie Sanders and other far-left politicians, this partisan effort would rig the rules of the Senate to allow the left to pass destructive policies like a $15 minimum wage, wasteful bailouts, and worse without a single Republican vote. This is a dirty bomb that will only divide Americans further.

Heritage Action is the grassroots lobbying arm of The Heritage Foundation; The Daily Signal is Heritage’s multimedia news organization.

Biden met with House Democratic leaders Friday at the White House. In remarks to reporters, the president said it was urgent to act and attacked Republican proposals as insufficient.

“If I have to choose between getting help right now to Americans who are hurting so badly and getting bogged down in a lengthy negotiation or compromising on a bill that’s up to the crisis, that’s an easy choice,” Biden said at the White House. “I’m going to help the American people who are hurting now. What Republicans have proposed is either to do nothing or not enough.”

Although details of a final bill are evolving, here’s a look at what Democrats, and some Republicans, are pushing for in the package.

Republicans and Democrats seem to be in some agreement about narrowing the number of recipients of individual payments of $1,400. The $1,400 number stems from a desire to add to the $600 checks already sent out—bringing the total to $2,000.

The Senate approved an amendment from Sens. Joe Manchin, D-W.Va., and Susan Collins, R-Maine, to prevent the checks from going to high-income earners—although it didn’t put direct parameters on income.

However, several proposals exist for what the limits should be, one considered most likely for families earning $100,000 or less.

Even a package containing limited direct relief checks still would cost about $420 billion, according to the Committee for a Responsible Federal Budget. That’s modestly less than Biden’s proposal to devote $465 billion to relief checks, which would have targeted singles earning up to $75,000 and couples earning up to $150,000.

Former President Donald Trump demanded $2,000 in relief checks to Americans during his final weeks in office. In this case, Democrats largely sided with Trump while most Republicans opposed the additional spending.

Lawmakers and policymakers have used two terms, stimulus checks and relief checks. The latter might be more appropriate, as more than two-thirds of the first round of COVID-19 checks went into savings or to pay down debt, rather than being spent to boost the economy, according to a survey from the New York Federal Reserve.

Such a proposal would be a heavy lift in the conference committee, however.

A nonprofit women’s organization called Girls Who Code is among those leading a movement to push the Biden administration to include a provision for guaranteed income.

Entrepreneur Andrew Yang sought the Democratic presidential nomination last year by promoting the idea of the federal government sending $1,000 a month to all Americans. This would have a price tag of $2.8 trillion per year, according to the Tax Foundation.

“Some Democrats are pushing for universal basic income that would continue the $1,400 checks automatically,” Matthew Dickerson, director of the Grover M. Hermann Center for the Federal Budget at The Heritage Foundation, told The Daily Signal.

On another front that has little to do with COVID-19, Democrats also are pushing to add to the relief package a bailout of union pensions costing at least $60 billion.

This would allow companies that lack the ability to pay their negotiated union pensions to get relief, as taxpayers would kick the money in.

“A lot of members want to bail out the union pension funds,” Heritage’s Dickerson said. “These union pensions have been underfunded for years and years.”

The proposal would strengthen the Pension Benefit Guaranty Corp., the chief federal insurer of pension funds. Under the plan, the Treasury Department would make direct payments to the PBGC, which would assist the pension funds.

The proposed $60 billion bailout doesn’t include the cost to taxpayers in later years, Roll Call reported.

Democrats say the Pension Benefit Guaranty Corp. faces a shortfall of $82.3 billion through the end of the decade, and that 124 pension plans with about 1.3 million participants are expected to run out of money by 2040.

4. Bailing Out States for Overspending

Biden reportedly told congressional Democrats that he wants to “go big” on the COVID-19 package, which includes money for state governments that haven’t controlled spending and mismanaged employee pension plans for decades.

These bailouts primarily would target states facing the most need because of their lack of fiscal restraint before the pandemic, critics say.

Last year, then-Senate Majority Leader Mitch McConnell, R-Ky., referred to the Democratic proposal as a “blue state bailout.” But now Democrats control the White House and both houses of Congress.

The portion for state aid would cost $350 billion, which Biden said would keep police and firefighters working. The president also proposes $170 billion to states for schools.

A group of 10 more liberal Republican senators met with Biden at the White House earlier this week and suggested lowering the income threshold for getting a stimulus check to no more than $40,000 for singles and $80,000 for couples.

But that plan doesn’t appear to be going anywhere, since Democrats have moved on to the reconciliation process, which doesn’t require Republican votes.

The overall price tag of the GOP counteroffer would have been $618 billion, less than half of Biden’s $1.9 trillion package, according to The Associated Press.

The Republican proposal also nixed aid for states. The GOP plan supported $160 billion in aid to states specifically for health care response such as vaccines, testing, and personal protective equipment and gear. However, Democrats view stopping there as not doing enough.

A hike in the federal minimum wage, which is now $7.25 per hour, could be the biggest sticking point in the conference committee.

The Senate adopted an amendment from Sen. Joni Ernst, R-Iowa, prohibiting a $15 minimum wage during the global pandemic. It passed by a voice vote.

In another GOP victory, the Senate approved an amendment from Sens. Rick Scott and Marco Rubio, both of Florida, to block tax hikes on small businesses during the pandemic.

Manchin opposed the $15 minimum wage that many Democrats were demanding.

With the Senate split 50-50 between Democrats and Republicans, and Vice President Kamala Harris casting any tie-breaking vote in favor of the Democrats, every vote matters.

However, Manchin indicated that he isn’t opposed to any increase in the federal minimum wage of $7.25 an hour for low-skilled workers, often younger and working at fast food chains or retail outlets.

Already, 26 states have a minimum wage higher than the federal one, according to the National Conference of State Legislators.

Before the pandemic, the Congressional Budget Office estimated that a $15 federal minimum wage would cost about 3.7 million jobs, though it would increase income for 17 million Americans who are able to keep their jobs.

“A $15 minimum wage may not occur, but there is a real risk [that] Sen. Manchin would accept what he considers correct for West Virginia,” Heritage’s Dickerson said.

“There is a lot of pressure on the Biden administration to raise the minimum wage,” Dickerson said. “To more than double the wage might be just opening the Overton window. But we could see a $10 or $12 minimum wage that would still have a detrimental impact on people’s ability to earn a living and for businesses to turn a profit.”

The Congressional Budget Office estimates that adding another $2 trillion in public debt would shrink the U.S. economy by 0.3%—about $100 billion—by the end of the decade.

This would increase annual debt payments by $40 billion. It also could boost inflation and higher prices, according to the CBO.

The federal government, through past legislation, already has spent $6 trillion for COVID-19 relief, according to the Committee for a Responsible Federal Budget.

The White House argues that the Congressional Budget Office’s estimate that unemployment likely will remain above pre-pandemic levels until 2024 is a reason for aggressive action.

The CBO projects that 7 million Americans would be unemployed in 2021 who otherwise would be working.

The Biden administration points to a Moody’s Analytics report projecting that the American Rescue Plan would bring employment to pre-pandemic levels by 2023, a year earlier than the CBO prediction.