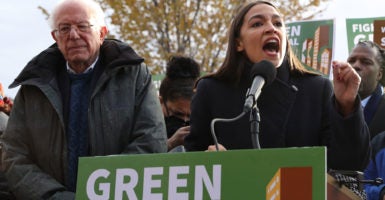 It’s been pretty clear that the Green New Deal would be a disaster for businesses and for consumers. Now a new study confirms just how disastrous the environmental and wealth-redistribution plan would be for Wisconsin.

Wisconsin families would be shackled with $40,000 in new costs, and the Dairy State’s struggling agricultural sector would be crippled, according to the multistate analysis authored by the Competitive Enterprise Institute and Power the Future.

The Green New Deal—as championed by liberals such as Reps. Alexandria Ocasio-Cortez, D-N.Y., and Mark Pocan, D-Wis., and many of the Democratic presidential candidates—calls for shifting energy consumption entirely to electric current from today’s primary sources, principally fossil fuels.

Doing so, the report finds, would cause $200 million in losses to Wisconsin farmers, while clobbering the state’s iconic dairy industry with $2.5 billion in additional costs.

Estimates say the dramatic carbon-free shift alone would cost trillions of dollars. The report notes that energy research firm Wood Mackenzie estimates that the greening of the U.S. power sector would come with a $4.7 trillion price tag, including around $1.5 trillion to add 1,600 gigawatts of wind and solar capacity and $2.5 trillion of investments in 900 gigawatts of storage.

An additional $700 billion is estimated for new high-transmission power lines to move that electricity from sun-drenched deserts and windswept plains to the urban areas where it would be used.

“At best, being most generous, it is simply negligent in getting its arms around the transition costs to the American life,” he said at a press conference at a Milwaukee-area manufacturing center. “At worst, it is political malpractice.”

In Wisconsin, households in the first year of implementation would face $75,000 in additional costs on the Green New Deal’s expensive ride to zero carbon dioxide emissions within a decade. The increased costs would top $40,000 every year thereafter.

Alaska would face the highest costs of implementation, at north of $84,000 in the first year, and nearly $52,000 after six years of the green plan in operation. That’s more than $10,000 higher per year than the other 10 states measured in the study.

Will Flanders, research director for the Wisconsin Institute for Law & Liberty, contributed to the study.

Flanders said the Green New Deal may play well in Washington, D.C., but it doesn’t cut it in “get real” places such as the Midwest, which rely on affordable, reliable energy. The climate-change alarmist plan would “drive middle-class families into poverty by imposing staggering annual costs,” he said.

For Green New Deal-backing Democrats who have talked so much about the plight of the U.S. farmer, the sweeping carbon dioxide reductions would be a liberal-inflicted blow on the agriculture industry.

The study finds the Green New Deal would force dairy farmers to pay an additional $500 to $2,000 per cow per year in compliance costs.

“How does that translate? That means an average farmer in Wisconsin of 150 cows will pay between $75,000 and $300,000 per year in addition to what they are doing now,” Leitner said, adding:

And if we think that we have seen a high exit of farms in Wisconsin in the past several years, this policy will close the door on any dairy surviving. It will be gone. This is very serious. This should not even be considered as a policy.

The study tracks only the costs of the Green New Deal’s constraints on energy generation. It does not delve into the plan’s myriad “social justice” programs, such as federally guaranteed jobs with “family-sustaining” wages, paid vacations, and “retirement security” for every American.

“Most provisions of the [Green New Deal] are so broad and open-ended,” the report notes, “that the list of potential programs necessary to implement the program is only limited by the capacity of legislators to imagine new government programs. Therefore, it is impossible to calculate the maximum cost of the GND.”

Josh Waldoch of Empower Wisconsin contributed to this article.