The President of Chad Was Killed in Combat. Here’s What You Need to Know About What’s Happening in the Region. 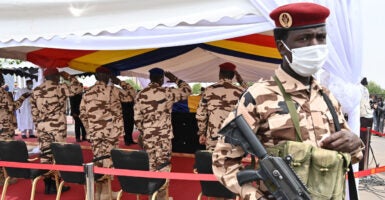 One of Africa’s longest-serving presidents, Idriss Déby of Chad, who had ruled for 30 years, was killed Monday in a battle with rebels advancing toward the capital. His shocking death has thrown the country’s frequently tempestuous politics into further turmoil, even as the rebels remain in the field.

The Front for Change and Concord in Chad rebel group crossed into Chad from its redoubt in Libya on April 11, reportedly with several thousand fighters. Its leadership claimed to wish to restore democracy to the country as Déby was poised to win a sixth term as president following a recent general election.

Information about the Front’s progress is murky, but it may have fought within several hundred miles of the capital, Ndjamena, before pausing its offensive after Déby’s death. The U.S. became sufficiently concerned that it withdrew its nonessential staff from its embassy in the capital before Déby was killed.

After Déby’s death was announced, the military suspended the constitution, disbanded the government (a move it later reversed) and parliament, and declared Déby’s 37-year-old son and four-star general, Mahamat Idriss Déby, as president and leader of the military for an 18-month transitional period.

This unconstitutional move provoked outcry from the military’s political opposition, but also from elements within the military, raising the specter of internal fighting.

The rebels are also preparing to resume their offensive, and may be garnering support from other rebel fighters and creating opportunities for other groups to challenge the government. It is unclear, however, if the Front can take Ndjamena after receiving a battering during its push.

In fast-moving and murky situations such as these, much of the initial reporting is often incomplete or even wrong, but there are some things we know for sure. Chad is a vitally important country in what may be Africa’s—and arguably the world’s—most volatile region. Of Chad’s six neighbors, Libya—where only a tenuous cease-fire prevents a return to civil war—performs best on the Fund for Peace’s Fragile States Index, ranking as the globe’s 20th-most fragile country.

A meltdown in Chad would further strain this already overburdened region. Despite its own many problems—Chad is ranked the seventh-most fragile country in the world—its forces are among the most capable fighters in the area, and have played an important part battling Islamist terrorism.

Chadian soldiers participate in the United Nations peacekeeping operation in Mali and the G5 group of countries, both of which are fighting the explosion of terrorist activity in the Sahel region of Africa.

Chad also did much of the heavy lifting beginning in 2015 to displace Boko Haram in northwest Nigeria (though the group is enjoying a recent resurgence).

Chad’s upheaval is also a reminder of why the Libyan conflict is so dangerous, and why the U.S. should exert itself to ensure the cease-fire sticks and ushers in a transition to stability.

The Front for Change and Concord in Chad fought in Libya since at least 2019 for Khalifa Haftar, the leader of the so-called Libyan National Army, which is one of the two primary combatants in the civil war there. Haftar reportedly outfitted the Front with heavy weapons that, along with its fighting experience, makes it a formidable opponent.

Libya’s tumult has destabilized the region since Moammar Gaddafi’s 2011 fall. It was heavily armed, former Gaddafi mercenaries who accelerated Mali’s instability have plagued the region ever since. It was virtually inevitable that the conflict would produce a serious armed challenge like the Front for Change and Concord in Chad to a neighbor, awash as it was with foreign-supplied weapons as well as money that has attracted mercenaries from all over.

The crisis in Chad is still unfolding, and it is difficult to anticipate how it will develop. The next several days, and potentially weeks and months, are going to be tense and difficult, with profound impacts for Chad, the region, and beyond.