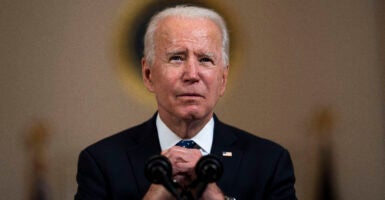 The guilty verdict for former Minneapolis police officer Derek Chauvin on all counts was correct, based on the evidence, but the theatrics leading up to that trial and after the jurors had made their decision was outrageous.

Demonstrations, riots, and looting around the country since the death of George Floyd had to have influenced the jury, the media, and public opinion.

Comments before, during, and after the trial by politicians were unhelpful, to put it mildly. Rep. Maxine Waters represents a district in California. Why did she go to Minnesota to urge people to “stay on the street” and “get more confrontational” if Chauvin was acquitted?

She did something similar when she urged those opposed to former President Donald Trump to show up at restaurants, gas stations, and other public places, and get in the faces of Trump officials. Waters denied she was inciting lawless behavior, but she had no problem claiming Trump encouraged the Jan. 6 insurrection at the U.S. Capitol in Washington.

President Joe Biden called the Floyd family before the verdict and said publicly that he was “praying for the right outcome.” One doesn’t have to be a mind reader to know the signal he was sending. It is safe to say he wasn’t hoping for Chauvin’s acquittal. He and Vice President Kamala Harris called again after the verdict.

Biden later repeated his assertion that systemic racism infects many Americans. In medicine, systemic means “affecting the whole body, or at least multiple organ systems.” Apparently, there is no cure for systemic racism and the Civil War, civil rights legislation, and trillions of dollars spent on programs to help mainly poor African Americans is not sufficient atonement for slavery and discrimination. White people are born racist according to this point of view.

With his calls to the Floyd family, perhaps Biden was following the example of John F. Kennedy, who called Coretta Scott King during the 1960 presidential campaign. Her husband, Martin Luther King Jr., had been arrested for violating probation.

Kennedy, who was reluctant to lead on civil rights for fear of losing the Southern vote, offered Coretta Scott King his support. The call was leaked to the media. Martin Luther King Jr. was released from jail the following day. The phone call was credited with garnering large support among African American voters.

As for the riots and demonstrations leading up to the Chauvin trial, a Wall Street Journal editorial put it best:

It would be nice to think all of this would prompt reflection among those who have exploited Floyd’s killing for political purposes. But it probably won’t. Even after the verdict, commentators who applauded the jury gave last year’s riots in American cities the credit for inspiring it. Not the facts. Not the law. But lawless protests. If a large faction of Americans really believes that only mayhem in the streets can guarantee justice in America, then this verdict will mean little, and we are in for far more unrest ahead.

Three other officers remain to be tried in the Floyd case, but the verdict may already be in on them as well. How can a jury not have been influenced by the lawlessness and the outcome of the Chauvin trial?

Is this the way our justice system is to proceed in the future? Will we have trials by mob rule? Someone should ask Attorney General Merrick Garland these questions.