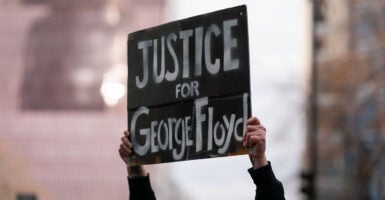 Outside the Hennepin County government center in Minneapolis, a person reacts Tuesday to the trial verdict that former police officer Derek Chauvin had been found guilty on all counts in the killing of George Floyd. (Photo: Ben Brewer/Xinhua/Getty Images)

Most criminal defense attorneys will tell you that a quick decision from the jury is generally bad news for their client.

That held true on Tuesday when the jury in former Minneapolis police officer Derek Chauvin’s trial reached a relatively quick verdict, finding him guilty of second-degree unintentional murder, third-degree murder, and second-degree manslaughter in the death of George Floyd.

The second-degree murder charge—the most serious one—carries a maximum sentence of 40 years imprisonment—though Chauvin will surely receive far less than that, given the applicable sentencing guidelines and his lack of a criminal record.

The judge in the case will ultimately decide his sentence.

The excruciating video from Chauvin’s encounter with Floyd showed that Floyd’s death was a senseless tragedy and that Chauvin’s conduct was inexcusable.

Even though Floyd initially resisted arrest, he was ultimately restrained and certainly did not deserve to die or to be injured by police officers sworn to serve and protect the residents of their community. To be clear, nothing Floyd did justified Chauvin’s conduct.

The big question the jurors had to decide, though, was whether Chauvin’s indefensible conduct rose to the level of criminally culpable conduct.

They clearly thought it did, because they convicted him on all three counts.

The legal standards applicable to each of the three charges are thorny. In fact, the trial judge had originally thrown out the third-degree murder charge until an appellate court ordered him to reconsider that decision.

Chauvin and his lawyers surely will raise that issue, among others, on appeal.

One of the most troubling issues that they will likely raise on appeal involves the comments of Rep. Maxine Waters, D-Calif., over the weekend before the jurors began their deliberations.

That’s dangerous and incendiary rhetoric, especially when the prospect of violence—including rioting and looting—loomed large over Minneapolis at the time.

Even the judge presiding over the case, in response to Chauvin’s lawyer’s request for a mistrial, said, “I’ll give you that Congresswoman Waters may have given you something on appeal that may result in this whole trial being overturned.”

The judge went on to say, “I wish elected officials would stop talking about this case, especially in a manner that is disrespectful to the rule of law and to the judicial branch and our function … .” He said that while Waters’ comments were “abhorrent,” he didn’t think it “prejudiced us with additional material that would prejudice the jury … [because] a congresswoman’s opinion really doesn’t matter a whole lot.”

He may be right legally, of course, but Waters’ conduct and statements remain troubling. Even more troubling is the fact that none of her Democratic colleagues in the House of Representatives was willing to hold her accountable when they denied, on a strictly party-line vote, an attempt to censure her. House Speaker Nancy Pelosi went so far as to say that Waters has nothing to apologize for.

A bedrock principle of our country is that everyone accused of a serious crime is entitled to a presumption of innocence and to a free and fair trial in front of a jury of his or her peers, who must be convinced beyond a reasonable doubt of the defendant’s guilt based on the evidence—and only the evidence—that is presented in court.

That shouldn’t be a controversial proposition. These are, after all, bedrock principles of our criminal justice system.

While Chauvin received all the process that was due to him, the implications of Waters’ incendiary comments—as well as the fortified status of downtown Minneapolis—couldn’t have been missed by the jurors or others involved in the case. That’s particularly true in light of the violence that broke out in Brooklyn Center, Minnesota, in response to a police shooting shortly before the jurors began their deliberations. Brooklyn Center is only about 10 miles from downtown Minneapolis.

The implications—made explicit by Waters—were clear. If jurors acquitted Chauvin, violence would follow.

While Chauvin certainly faces an uphill battle on appeal getting his convictions overturned on that basis, it should still trouble all of us that we even need to have that discussion.

Mob violence and intimidation tactics—especially when egged on by public officials—are unacceptable and undermine the rule of law.

Contrary to the comments of Rep. Alexandria Ocasio-Cortez, D-N.Y., that “[t]his isn’t justice,” the system in this case appeared to work as it should, which should comfort all of us.

But we should all be extremely discomforted by the seeming willingness of so many to so aggressively demand a particular outcome in a criminal case before the process required by our legal system has run its course.