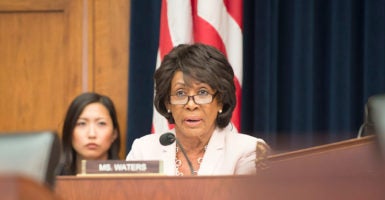 Responding to inflammatory remarks by Rep. Maxine Waters, D-Calif., other African-American leaders gathered Thursday morning on Capitol Hill to appeal for civility and for Congress to censure Waters.

Many saw Waters’ remarks as calling on supporters to continue confronting and harassing members of President Donald Trump’s administration, heightening a lack of civility in American public discourse.

“Her call to extremism, based on where another American citizen works and who they associate with, must be sternly addressed by [House] Speaker Paul Ryan,” Star Parker, president of the Center for Urban Renewal and Education, said of Waters, adding:

An apology is not enough, nor does she offer one, after being asked by [the] House speaker. As we move into two months of intense debate over the next [Supreme Court] nomination, the censuring of Maxine Waters becomes of extreme urgency.

Parker’s Center for Urban Renewal and Education, a nonprofit that works to fight poverty through market-based policy, organized the press conference with leaders of five other conservative groups and Christian ministries.

LIVE: African American leaders are calling for the censure of Maxine Waters and an end to incivility.

Parker, a former welfare mother whose experiences led her to challenge the liberal welfare state, is also a syndicated columnist whose work is published by The Daily Signal.

Waters, an outspoken critic of Trump, made her controversial remarks June 23 during a Keep Families Together rally in California. The California Democrat said of Trump administration officials:

According to the House website, the Constitution grants the House broad power to discipline members for acts ranging from criminal misconduct to violations of internal rules.

“The most severe type of punishment by the House is expulsion, which is followed by censure, and finally reprimand,” according to the entry, which lists 23 members who have been censured—the latest being Rep. Charles Rangel, D-N.Y., in 2010.

Chanting protesters forced Nielsen out of a D.C. restaurant where she was having dinner, then showed up at her home days later. The Red Hen restaurant in Lexington, Virginia, declined to serve Sanders and asked her to leave.

We can look in recent history at the language of the civil rights movement and Jim Crow. Some of what we’re appealing for today President John Kennedy said then that we must have, civility. But we must have openness in our free society, that people can be mobile.

The fact that most people that are now either associated with this administration and/or that are in media to support this administration are not safe in their personal space … that their children and their grandchildren are now put at risk, simply because of the choices they have made to affiliate with half of the country that agrees with the momentum, the agenda, and the accomplishments of President Donald Trump, that now we are at risk, is unacceptable in this free and open society.

The ongoing harassment is not limited to those in the Trump administration or Republican officials.

In San Antonio, Texas, a man threw a beverage in the face of a 16-year-old eating at a local Whataburger and stole his  “Make America Great Again” hat.