71% of Amazon Workers Reject Union, but Liberals’ PRO Act Would Undercut That Right to Choose 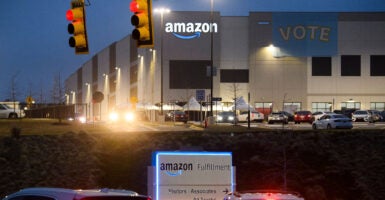 A "vote" banner hangs on the facade of an Amazon fulfillment center March 27 in Bessemer, Alabama. Employees there voted overwhelmingly against unionizing through the Retail, Wholesale and Department Store Union. (Photo: Patrick Fallon/ Agence France-Presse/Getty Images)

Amazon warehouse workers in Bessemer, Alabama, have voted 1,798 to 738 against unionizing under the Retail, Wholesale and Department Store Union.

Even amid an outpouring of celebrity and politician visits to Bessemer to promote the union’s message, workers at Amazon overwhelmingly decided that it was better for them, their families, and the Bessemer community to maintain a direct relationship with Amazon, rather than to be represented by the union.

The freedom to choose whether or not to be represented by a union is an important one—and it’s just one of many fundamental rights threatened by liberals’ agenda.

Specifically, the PRO Act, a sweeping bill that would upend the labor market in the U.S., would create a process that could replace workers’ actual votes—including votes not to unionize—with a majority of workers’ signed cards saying they support holding a union election.

That’s especially problematic considering that union organizers not infrequently use intimidation, misrepresentation, and baseless promises to get workers to sign those cards.

A fundamental component of our democracy is the right to vote in secret and free from fear and intimidation, whether voting for political representation or for workplace representation.

Next, the PRO Act would invalidate 27 states’ right-to-work laws and allow unions to take a portion of workers’ wages directly from their paychecks without their consent—and without regard to their stated opposition.

In addition to granting a third party the right to confiscate workers’ wages against their wishes, this provision would undermine state lawmakers’ ability to enact laws leading to more employment opportunities, stronger income growth, and faster-growing economies.

The PRO Act would also violate workers’ privacy by requiring employers to disclose more personal information about their employees to union organizers than they do to the IRS.

That information—which would be provided without workers’ consent and without the opportunity to opt out—would include workers’ home addresses, personal email addresses, and mobile and home phone numbers all in an electronically searchable format.

Such an infringement on workers’ privacy is especially troubling considering that unions have been known to use this personal information to threaten and intimidate workers at their homes or, in one case, to harass a worker who tried to decertify the union by using her personal information to sign her up for thousands of dollars of unwanted magazine subscriptions and consumer products.

Unions and the liberal politicians they support with workers’ union dues argue that it’s too difficult for workers to join a union, but the reality is that it’s far harder for workers to get out of a union than it is for them to get into one.

In fact, an estimated 94% of all private sector workers who are in unions never voted to be a part of that union. Either they voted against the union but were nevertheless forced to be a member of it, or they were grandfathered into their union as a result of a prior election that might have occurred decades before they were born.

The Employee Rights Act would help ensure more workers have a right to vote for their representation.

Part of the reason that unions aren’t attracting workers (only 6% of private sector workers belong to unions) is that as laws and the globally competitive economy have provided much of what unions used to achieve, unions have failed to adapt and offer services that workers value.

The more agile and increasingly service-oriented American workforce desires flexible workplace environments, and they want to be recognized and compensated for their hard work and unique contributions. Yet, unions remain stuck in an industrial-era model that imposes rigid workplace environments and strictly seniority-based pay scales.

Moreover, workers and employers naturally desire amicable relationships with one another—after all, they are dependent on one another. And yet, unions thrive on adversarial relationships and strong-arm tactics that pit workers against employers.

There’s also the fact that these strong-arm tactics have dragged down entire industries. For example, the United Auto Workers pushed compensation costs to unsustainable levels (up to twice that of foreign competitors), and as a result, U.S. auto production today is only about one-third of what it was two decades ago.

First, workers deserve to have their voices heard, and they deserve to be able to express their views through the outlet of their choice—be that a union, direct communication with their employer, or any other form of representation they desire.

Second, employers need to recognize workers’ voices. Companies that fail to provide an outlet for workers to express their concerns or that fail to respond to those concerns will suffer. Their workers may become less motivated and less productive; they may quit to go to other jobs; or they may unionize and limit employers’ ability to run their companies as they see fit.

Unfortunately, current law as interpreted by the National Labor Relations Board actually prohibits employers from hearing, and responding to, workers’ voices by effectively outlawing a previously common and productive practice of “employee involvement.”

In that scenario, teams of employees and employers would work together in nonunion settings to address specific workplace issues, such as schedules, health and safety concerns, or bonuses and overtime.

The Teamwork for Employees and Managers Act (TEAM Act)—which passed Congress in 1995, but was vetoed by President Bill Clinton—would have allowed employers and employees to work together on issues of mutual interest so long as they do not claim or seek authority in collective-bargaining agreements.

The TEAM Act would be especially helpful in the current environment as employers and employees need to work together to adapt to, and recover from, the changes brought on by the coronavirus pandemic.

Lastly, for policymakers, the Alabama election proves the importance of respecting individual workers’ desires. Despite some workers’ concerns, the overwhelming majority of workers at the Bessemer plant wanted to maintain their own unique voices, instead of being forced to succumb to the union’s solitary voice.

While restricting workers’ freedoms and violating their rights by enacting the PRO Act and forcing more workers to be represented by unions against their will is not the solution, that doesn’t mean that labor organizations can’t help workers.

If both forced unionization and exclusive representation were replaced with entirely voluntary arrangements, labor organizations could branch out in new ways to benefit workers.

For example, they could provide education and certification programs to help workers gain valuable new skills, or they could help negotiate for alternative benefit packages that let workers pick benefits based on what meets their unique needs and desires.

Moreover, in situations like the one in Bessemer, Alabama, voluntary and nonexclusive representation would allow both sides to win. The 71% of workers who voted not to unionize would be free to negotiate directly with Amazon, while the 29% who voted in favor of unionizing could join and pay the Retail, Wholesale and Department Store Union to negotiate with Amazon on their behalf.