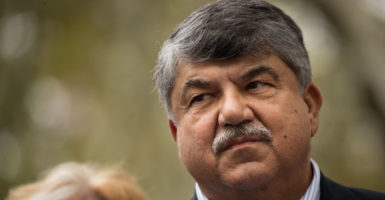 Before the House approved a sweeping union-boss wish list, AFL-CIO union leader Richard Trumka, pictured in 2017, warned lawmakers that “Those who would oppose, delay, or derail this legislation, do not ask us—do not ask the labor movement—for a dollar or a door knock. We won’t be coming.” (Photo: Drew Angerer/Getty Images)

Before the House approved a sweeping union-boss wish list that attempts to send workers back into the 20th century, AFL-CIO union leader Richard Trumka warned lawmakers that “Those who would oppose, delay, or derail this legislation, do not ask us—do not ask the labor movement—for a dollar or a door knock. We won’t be coming.”

In other words, if lawmakers didn’t vote for legislation that eliminates jobs that aren’t easily unionized and forces workers to pay fees to unions they do not want to belong to (along with many other union wish list items), unions would refuse to use their money and resources to help them get reelected.

And much of the reason can be traced to efforts such as this. When unions fought for safer working conditions and fairer wages—when they addressed matters that legitimately improved the lives of their members—they flourished.

When it got to the point where they were arguing to eliminate jobs and force workers to underwrite political causes with which they don’t agree, they floundered.

The decrease in manufacturing jobs and rise of independent workers also meant less demand for unionization, but unions’ shift toward gaining power through politicians instead of workers and their failure to adapt and provide what workers value have played major roles in their decline.

For example, unions often attempt to micromanage employers’ business practices from the outside—dictating their compensation structures, seniority systems, and even work schedules—without knowledge or regard for what will help the business grow and thrive. Instead of helping workers, this has resulted in lost jobs, shuttered doors, and a $638 billion shortfall in union workers’ and retirees’ pension accounts.

Many workers have rejected union-supported rigid pay scales and standard schedules in favor of being paid based on performance. Instead of a seniority system, they want more flexible and alternative work options.

In some cases, unions have lost workers’ support because of illegal activities, including corruption, racketeering, embezzlement, and organized crime, all fueled with workers’ hard-earned dues.

Instead of focusing on helping workers and their employers succeed together, unions now spend $2 billion a year or more to try to elect politicians who will grant them more power and money.

Workers don’t want their union dues spent this way. According to a 2010 poll, 69% of private and government union employees believe union officials should focus on membership instead of political elections and rather than spend their dues on partisan politics, instead use it to create more jobs.

If unions want to survive and thrive in the U.S., they should move away from politics and toward member service. The dues-free Freelancers Union, for example, has attracted 450,000 independent members by providing what workers value, such as education, insurance benefits, and advocacy.

A focus on additional education will be a must—both to help workers prepare for changes within their own job and to help equip them for new types of work.

Structural changes could be in order as well. Union leaders could address the complaints of both workers who say they have no choice in who their organizations support politically and other members who say workers should not be able to glean the benefits of union membership without sharing in the costs with members only agreements. These require workers to pay for only the services they use and to choose their own representation.

Unions could choose to represent workers in only some employment matters. For example, the Major League Baseball Players Association provides representation to its members and sets minimum salary levels, but individual players negotiate their compensation packages directly with their teams.

Unions claim the PRO Act will protect workers, but it’s hard to comprehend how forcing workers to pay hundreds of dollars a year to organizations they do not support; forcing employers to give more of workers’ personal information to unions than they do to the IRS; forcing binding arbitration contracts upon workers without a chance to vote on them; subjecting neutral workers in nonunionized environments to disruptions in their work and incomes; taking away workers’ rights to a secret-ballot union election; and eliminating millions of franchising, contracting, gig-economy, and independent jobs would protect workers.

Unions have played an important historical role in helping to secure some of the important legal protections workers now have and in successfully fighting unfair labor practices and worker exploitation. But the PRO Act demonstrates why unions have declined—a shift in emphasis from helping workers to advancing political cause that increase their power and wealth. Taking away democratic rights and work options won’t protect workers; it will suppress them.