Why Volkswagen Workers Should Be Wary of Unionizing 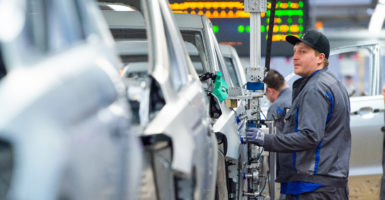 Volkswagen workers in Chattanooga, Tennessee, will decide this week whether to unionize. (Photo: Christophe Gateau/picture alliance via Getty Images)

More than 1,700 Volkswagen Chattanooga workers will head to the polls Wednesday through Friday this week to vote on a consequential measure: whether or not to unionize.

A recent New York Times article should come as a warning sign to Volkswagen workers. The article depicts Rick Marsh, a longtime GM worker in Ohio, as despondent after his factory, where he worked for 25 years, announced it was shutting its doors.

The article described his factory job as “a golden ticket to a middle-class life.” For Marsh, “his job became a central part of how he saw himself.” When the Lordstown, Ohio, plant produced its last truck, “it was like a heart stopping. He had lost the thing that made him who he was.”

Unfortunately, Marsh isn’t alone. Domestic auto production today has been more than halved since 1999, and at least part of that decline has to do with the United Auto Workers union pushing compensation to unaffordable levels.

When the big three Detroit automakers received a taxpayer bailout between 2008 and 2010, the average hourly compensation cost for unionized workers at Ford, General Motors, and Fiat Chrysler was more than $70 per hour.

That was great for workers while it lasted, but it simply wasn’t sustainable. In the end, tens of thousands of U.S. auto workers had their “golden tickets” exchanged for pink slips.

The reason comes down to simple math: When companies are beholden to unions to tell them who they can hire and fire, and how much compensation they must provide their workers, they end up employing fewer workers.

Unions like the United Auto Workers would like workers to believe that they alone can force companies to provide just compensation and safe working conditions. But in fact, a strong and competitive economy does more for workers than any union can.

Volkswagen, which remains officially neutral on this week’s vote, explained the following in its election website:

No union and no company can guarantee to never shut down its operations, close a location, or lay off employees. True job security comes from our performance as a plant. If we continue to be competitive and grow our market share, we won’t have to worry about things like location shutdowns and mass layoffs. Please keep in mind that the company has not laid off a single full-time Volkswagen employee since opening in Chattanooga in 2010, while other auto manufacturers have had closures and layoffs.

Moreover, as other unionized automakers have closed their doors, Volkswagen is actually expanding its Chattanooga operations. In January, the company announced that it will invest $800 million—adding 1,000 jobs—to build electric vehicles at the Chattanooga plant.

While Volkswagen Chattanooga’s operations are thriving, the United Auto Workers are not. The union lost 9% of its members in 2018 alone—a continuation of recent declines due in part to unionized plants closing up shop and automakers moving to right-to-work states in the South, where employees are not forced to join a union.

The union also spent millions of dollars from workers’ dues responding to its own internal corruption scandal, in which top executives illegally used up to $9 million intended for worker training on personal luxury items instead.

In addition to disturbing corruption within the union, one Volkswagen worker expressed concern that union dues would be used for political purposes, instead of exclusively for workers’ benefit.

That concern is warranted. Based on the union’s financial statement filed in March, only 36% of its expenditures went toward representation activities. That’s not a very good return on the roughly $500-$1,000 per year that Volkswagen workers would have to pay in dues, should they vote for unionization this week.

Instead of relinquishing their rights by jumping on the sinking ship that is the United Auto Workers, Volkswagen workers should trust in their own productive capacities and open up communications with Volkswagen to continue propelling their company’s growth. Such growth is, after all, the only sure guarantee of workers’ prosperity.