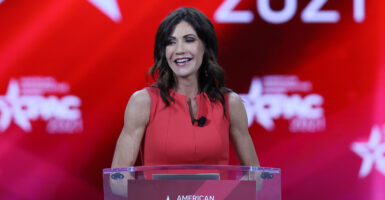 South Dakota Gov. Kristi Noem, pictured at the Conservative Political Action Conference on Feb. 27, should have honored the will of her constituents, taken the risk of signing the bill, and joined the myriad of other organizations already working to ensure fairness for women and girls. (Photo: Joe Raedle/Getty Images)

Gov. Kristi Noem has just let down the girls and women of South Dakota.

It wasn’t a total surprise. Noem, the Republican governor of South Dakota, announced earlier this month she would not sign the legislation, designed to “promote continued fairness in women’s sports,” that the Legislature passed.

The provision would ensure that girls and women can participate in athletic activities equally and fairly—and only amongst and against biological females.

Conservatives were puzzled, even upset, that Noem made this announcement after she initially supported the bill.

At first, she requested significant changes from the Legislature that would shift the bill’s meaning via a “style and form” veto to the House, which it rejected, 67-2.

Then, instead of signing the bill, Noem signed two executive orders: “One to protect fairness in K-12 athletics, and another to do so in college athletics,” she tweeted.

South Dakota state Rep. Fred Deutsch, a Republican who has been in the middle of negotiations, tells me in a phone interview that he has mixed feelings on Noem’s decision to change her mind.

“Regarding the executive orders, it’s positive in one way that it keeps a foot in the door. She wants to call special sessions. I think it shows a genuine concern for doing something, but we definitely want to have a bill,” he says.

Deutsch said no one in the state Legislature that he knew of had any foreknowledge of the executive order—so it caught everyone by surprise.

Noem originally offered multiple reasons why she changed her mind on the important legislation, but they’re not all that compelling.

Here’s why I think she should have supported the original legislation.

First, the people of South Dakota support the bill. South Dakota’s Legislature has already voted overwhelmingly to pass the legislation. It sent it to Noem’s desk with full anticipation that she would sign it. Why? She said she would.

That’s not the only reason. Noem’s promise is built on the premise that doing so honors her constituents’ wishes. In this case, both chambers of the state Legislature passed this bill. Most of the time—although not all of the time—a legislator’s vote on a provision reflects what his respective constituents want.

Reason No. 2: There’s really no good reason not to sign the bill.

Noem made multiple interesting claims when she changed her mind and said she could no longer support the bill as written. She claimed that the NCAA had a policy that essentially allowed transgender athletes to play in sports and that prohibited adhering to the rules such as those in the Fairness in Women’s Sports Act.

Noem also said if she signed the bill she’d certainly be sued. Not only that, but she was convinced she’d lose the lawsuit.

On one hand, there’s no real evidence either one of these would happen. Title IX, which was enacted to protect women’s funding in education and ensure fairness for women, even in sports, is already the law. If anything, there’s evidence if Noem was sued, she’d win.

On the other hand, since when did the threat of a possible or pending lawsuit stop a conservative from doing the right thing?

Passing laws are an effective means of change. Just because they might get challenged does not mean a bill should not become law.

Ultimately, our girls and women deserve our support.

That’s the main reason Noem should have reverted to her original position on the legislation. Women deserve a chance to play sports in a fair environment—but right now, women’s sports is an environment being encroached upon via the LGBTQ community.

While everyone deserves—and has—equal rights under the law, that equality does not mean some people get more rights than others. Yet that’s exactly what is happening right now.

In some parts of the country, transgender athletes, who were born male, are competing against biological girls and besting them at their own game. This strips women and girls of the opportunity to play sports in a fair setting. How is that fair?

Noem acknowledges this. In fact, she supports this concept so much, she announced last Monday that instead of signing the bill presented before her, she was going to launch a coalition in support of Title IX and female athletes.

That’s entirely unnecessary. There is no need for her to virtue signal and support women via a coalition. A bill protecting women’s sports is infinitely more proactive than a coalition. When I tweeted this last week, it seemed to resonate widely.

Likewise her executive orders, while a nice gesture, don’t really have the same kind of enforcement effect a law does.

If Noem wants a coalition, there’s already a real one in place. In an open letter sent Monday, Alliance Defending Freedom, Heritage Action for America, Save Women’s Sports, Concerned Women for America, and others invited Noem to join them in supporting legislation that protects female athletes. But as a governor, Noem is able to do far more than just join a coalition.

Noem has offered the public many reasons why she shouldn’t sign the legislation, but they’re not persuasive. She should have honored the will of her constituents, taken the risk of signing the bill, and joined the myriad of other organizations already working to ensure fairness for women and girls.

Deutsch and many of his peers in the South Dakota House did not buy Noem’s excuses that she’d face lawsuits or that she needed to gather a coalition instead. He hoped she would support the bill regardless of the heat she was facing.

“Some issues are strong enough that you take a stand on. If you want to ensure fairness for our daughters and granddaughters, sometimes you just have to take a stand,” he says.