Why Biden’s Blaming Trump for Border Crisis Has Zero Credibility 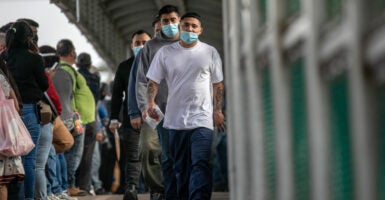 Mexican deportees walk across a U.S.-Mexico border bridge from Texas into Mexico on Feb. 25 in Matamoros, Mexico. Although President Joe Biden attempted to temporarily freeze deportations by executive order, a federal court ruled he could not, and deportations have continued. (Photo: John Moore/Getty Images) 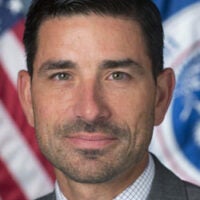 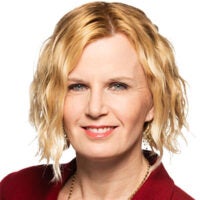 No one believes the Biden White House’s feeble attempt to blame the Trump administration for the current border crisis.

As the Biden administration unsuccessfully tries to deflect blame for the humanitarian disaster now occurring before America’s eyes, despite its directed media blackout, the administration is only succeeding at showing it knows it has a problem.

The Trump administration experienced a border crisis in 2019 when families and unaccompanied children, mostly from Central American countries, surged at our southern border and claimed fear of returning home to obtain entry into the U.S. and disappear into our country’s interior.

No one can forget the images of the caravans of illegal aliens traveling north. The height of the crisis occurred in May 2019, when U.S. Customs and Border Protection encounters reached over 144,000 illegal aliens.

To end the problem, the Trump administration sought help from Congress in the form of additional funding to build the border wall; an end to the Flores Agreement, which a single federal judge expanded over the decades into an unrealistic order that children could not be detained more than 20 days; and a legislative fix so that the Department of Homeland Security could treat unaccompanied alien children from Central America the same as those from Mexico.

Congress refused. House Speaker Nancy Pelosi, D-Calif., and others on the left denied there was a border crisis (sound familiar?) and the government shut down in a stalemate.

The Trump administration had to end the crisis on its own. Choosing a heretofore unused, but statutorily authorized “Remain in Mexico” program, it negotiated with Mexico to house migrants seeking U.S. asylum on the Mexico side of the border during their pending court proceedings.

When would-be migrants learned claiming fear alone was no longer their ticket into the U.S., the caravans stopped coming.

The Trump administration also used leverage with El Salvador, Guatemala, and Honduras to negotiate Asylum Cooperative Agreements that resulted in those countries (and Mexico) enforcing their own borders to prevent migrant flows, building up their own asylum systems, and receiving nationals back who traversed their country, but had not requested asylum before seeking it at the U.S. border.

In short, the Trump administration imposed consequences for illegal immigration and ended “catch and release.”

The number of Customs and Border Protection encounters rapidly declined to 52,000 by September 2019, and fell further to 36,000 in February 2020, before COVID-19 travel restrictions were imposed.

In March 2020, the director of the Centers for Disease Control and Prevention imposed Title 42 public health restrictions, ordering the suspension of admitting individuals traveling from Canada and Mexico, regardless of their country of origin.

Accordingly, the Trump administration immediately returned illegal aliens across the border to prevent further spread of the coronavirus.

Enter presidential candidate Joe Biden. His campaign website read that he would immediately end the Remain in Mexico program; stop building the border wall; surge resources to the border to process all asylum-seekers into the country; immediately rescind the mislabeled “Muslim travel bans”; give amnesty to so-called “Dreamers,” Temporary Protected Status holders, and Deferred Enforced Departure holders, and the rest of the estimated 11 million illegal alien population; only enforce immigration laws against convicted serious criminals; and increase the annual refugee admission ceiling to 125,000.

During a presidential debate, Biden went further, stating we “owe” the Dreamers amnesty.

The smugglers and traffickers got the message loud and clear, and cranked up their business. The number of Customs and Border Protection encounters increased, but the Trump administration continued to return the aliens over the border.

Because it was still applying consequences to illegal immigration, the Trump administration did not face a border crisis in 2020.

That all changed on Jan. 20, when the Biden administration immediately stopped wall construction, ended the Remain in Mexico program, tore up the Cooperative Asylum Agreements, started releasing illegal aliens into the U.S., and ended 90% of Immigration and Customs Enforcement removals.

Worse still, it entices more smuggling and trafficking of children every time administration officials state that unaccompanied children will not be expelled from the U.S.

And while Biden hasn’t yet repealed Title 42 public health restrictions, the administration has stopped using the authority in some locations to remove families and in its entirety with respect to unaccompanied children.

The Trump administration warned the Biden transition team that such decisions would quickly result in a border crisis. The Biden administration ignored the warnings, imposed its negligent policy decisions, and has used egregious messaging, such as telling future migrants: “Don’t come right now.”

After just one month, Customs and Border Protection encounters ballooned to more than 100,000, the number of unaccompanied children has risen to 16,500 and continues to climb.

Three convention centers are opening to house those children because the Department of Health and Human Services cannot find enough sponsors for them. The secretary of homeland security has ordered the Federal Emergency Management Agency to assist at the border and activated his own agency’s Volunteer Force to go to the border.

In perhaps the most desperate sign of the crisis, the Border Patrol in Texas is no longer issuing court dates to illegal aliens because it takes too long to complete the paperwork, and it simply needs to process individuals quicker. That’s a truly astonishing development.

This week, the president appointed Vice President Kamala Harris to oversee this crisis. Her appointment and the attempt to blame former President Donald Trump are tacit admissions that they have a crisis on their hands, but Americans know the blame lies squarely at Biden’s feet.