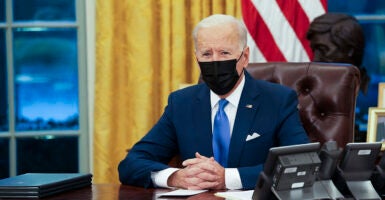 Secretary of Homeland Security Alejandro Mayorkas summed up our border crisis in a statement he released March 16: “We are on pace to encounter more individuals on the southwest border than we have in the last 20 years.”

According to The Wall Street Journal, Border Patrol agents made about 75,000 arrests of migrants crossing illegally in January.

And, the Journal reports, “the government is seeing more children arriving each day than ever before, with an average of 523 children taken into custody by Border Patrol agents each day over the last three weeks …”

The basic factors driving those from the Northern Triangle of Central America—Honduras, Guatemala, and El Salvador—to want to come to the USA is no mystery.

The already-horrendous economic conditions in these countries were further exacerbated over the last year by the COVID-19 pandemic and by hurricanes.

However, the conditions that motivate people to consider entering the United States illegally and that motivate them to actually try it are different. They try to do it when they think they can succeed.

And for this reason, those wanting to do it followed our November presidential election carefully.

A ramped-up wave of migrants trying to enter illegally is Trump’s fault, per Mayorkas, not because he secured our borders but because he cut foreign aid to these Central American countries.

The root cause of the problem “is the poverty, violence, the persecution of people … of the Northern Triangle,” said Mayorkas. “And why we are seeing the surge now is in part because the funds that were dedicated to those three countries, to address the root causes, was discontinued under the Trump administration …”

The Trump administration announced a $560 million cut in foreign aid for these three Northern Triangle countries.

The waste and inefficiency of foreign aid money is legend and well documented.

The root cause of poverty, violence, and persecution in these countries is corrupt, mismanaged governments, not the absence of U.S. taxpayer dollars.

Transparency International publishes annually its Corruption Perceptions Index, rating countries worldwide based on perceived corruption. Out of 180 nations rated, with 180 being the worst, El Salvador ranks 104, Guatemala 149, and Honduras 157.

In addition to our border problem, American taxpayers should be worried that those running our government now think sending hundreds of millions of U.S. taxpayer funds to the most corrupt countries in the world will solve their poverty problems.

But personal responsibility has never been a big point on the liberal agenda.

We might note that becoming an American immigrant once meant embracing the values of freedom and personal responsibility.

Today it means arriving to a culture dominated by critical race theory, where outcomes are government-mandated racial and ethnic head counting rather than work and personal initiative.

The fact that skin color and ethnicity may grant these potential immigrants from Central America special standing in the U.S. may give them further motivation to enter illegally.

“Hispanic support” for Democrats “dropped by 8 to 9 percent,” noted Shor.

Hispanics are voting more like “white conservatives,” he says.

Big government and open borders are not selling well with Hispanic voters.