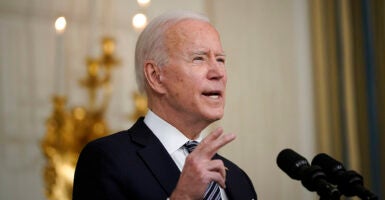 Team Biden has a persistent lying problem when it comes to the Trump administration’s supposedly terrible record with the coronavirus vaccine. You could see it again in a March 11 prime-time NBC News coronavirus special, “COVID One Year Later: Life After Lockdown.”

On the steps of the Lincoln Memorial, anchorman Lester Holt suggested to White House chief of staff Ron Klain that President Joe Biden’s team now “owns” the pandemic response and asked “what’s taking so long” with the vaccines.

Klain automatically blamed former President Donald Trump, saying: “[W]e inherited a vaccine system that was moving at a snail’s pace and we’ve had to accelerate. We’ve had to go buy hundreds of millions of doses of vaccine that hadn’t been ordered.” Holt didn’t challenge that.

Klain said something similar on “Meet the Press” days after the inauguration: “But the process to distribute the vaccine, particularly outside of nursing homes and hospitals out into the community as a whole did not really exist when we came into the White House.”

This was an echo of Biden at a Pfizer manufacturing site: “Just over four weeks ago, America had no real plan to vaccinate most of the country,” Biden said, going on to say Trump “failed to order enough vaccines, failed to mobilize the effort to administer the shots, failed to set up vaccine centers.”

And an echo of Vice President Kamala Harris on “Axios on HBO”: “There was no stockpile. … There was no national strategy or plan for vaccinations. We were leaving it to the states and local leaders to try and figure it out. And so, in many ways, we are come—starting from scratch on something that’s been raging for almost an entire year.”

Perhaps because they were energetic in checking Trump’s boasts about his handling of the pandemic, the “fact-checking” sites have been calling out the Bidenite baloney that Trump did next to nothing.

On March 12, Twitter created a thread under the somewhat-misleading headline “There was a vaccination distribution plan under Trump but it has been widely expanded by Biden, according to PolitiFact, Newsweek, and FactCheck.org.”

This didn’t accurately summarize the Biden-correcting tweets assembled underneath the headline.

Were vaccines “moving at a snail’s pace”? On Jan. 15, the week before Biden was sworn in, 10.6 million Americans had received a COVID-19 vaccine under Trump, according to the Centers for Disease Control and Prevention.

Did they fail to order enough vaccines? As of Dec. 31, the federal government had contracted to buy at least 800 million vaccine doses for delivery by July 31.

The Trump administration encouraged a flexible and federalist approach to coronavirus restrictions and coronavirus vaccines. Leftists would say letting states, rather than the federal government, control anything equals “no national strategy.”

The Democrats and the media have decried Trump for politicizing the pandemic, which is a bad joke, since they were clearly politicizing it soon after their first impeachment attempt fizzled. Trump called their political exploitation a “hoax,” and then they claimed he called the virus a “hoax.”

Even today, Team Biden is relentlessly slamming Trump as the scapegoat for everything that’s ever gone wrong. It’s nice that the “fact-checkers” can stay on this subject, even if the “objective” networks can’t.