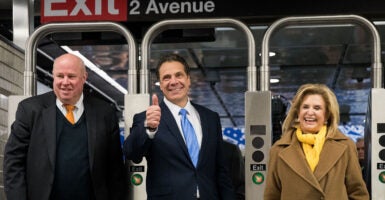 Some House Democrats have called for New York Gov. Andrew Cuomo to resign over allegations of sexual harassment, but aren’t willing to investigate his role in COVID-19 deaths at nursing homes.

Cuomo’s fellow Democrats seem to be trying to “change the narrative” on the governor to avoid talking about the state’s nursing home deaths, said Rep. James Comer, R-Ky.

“We are trying to hold Gov. Cuomo accountable for the nursing home deaths,” Comer, ranking member of the House Oversight and Reform Committee, told The Daily Signal.

But Maloney and other Democratic lawmakers have ignored calls from Republicans for the committee to investigate and perhaps call Cuomo to testify on the nursing home deaths.

Congress has an obligation to investigate, Comer said.

The New York State Assembly opened an impeachment investigation of Cuomo, as the governor was fending off law enforcement investigations regarding both the sexual harassment allegations and his handling of COVID-19.

New York Attorney General Letitia James, a Democrat, issued a report in January stating that the Cuomo administration undercounted nursing home deaths by “approximately 50%” and that Cuomo’s mandates requiring that COVID-19 patients return to nursing homes “may have contributed to increased risk or nursing home resident infection, and subsequent fatalities.”

Maloney called for her state’s governor to resign last week because of the sexual harassment allegations, but thus far has not responded to the GOP’s request for a congressional probe of Cuomo. Maloney expressed her agreement Friday with the majority leader of the New York State Senate.

“I join with Majority Leader Andrea Stewart-Cousins, my colleagues, and others who have called on Gov. Cuomo to resign in the best interest of all New Yorkers,” Maloney said. “We have come a long way, but now is the time to finally ensure that this generation’s courage stops harassment once and for all.”

As recently as January, Maloney had “applauded” Cuomo in a press release for the state’s COVID-19 vaccination program.

“During the early months of the pandemic, the Javits Center served as an emergency field hospital, and I applaud Gov. Andrew Cuomo opening it now as a mass vaccination hub at the convention center,” Maloney said.

A spokesperson for Maloney did not immediately respond to The Daily Signal’s request for comment for this report.

Most other members of New York’s congressional delegation called for Cuomo to resign.

The sexual harassment allegations are serious, Comer said, but Congress has direct purview over investigating how federal dollars were spent on New York during the worst moment of the COVID-19 crisis and how nursing home deaths were reported.

Comer also said he believes Congress should look into what, if any, role campaign contributions played in Cuomo’s COVID-19 policy for nursing homes.

Comer said the oversight panel should be about more than exposure and should involve accountability. Thus, he said he would want the committee to forward its findings to the Justice Department and other relevant federal agencies.

A Wall Street Journal commentary from September raised similar questions about whether Cuomo’s ties to industry groups shaped his policy of putting COVID-19-infected seniors back into nursing homes, where the disease could spread to other residents.

Cuomo’s office did not immediately respond to The Daily Signal’s request for comment for this report.

The governor has said repeatedly that he would not resign. He has denied sexual harassment and sexual assault allegations.

Cuomo did admit to mistakes in the nursing home data. However, in a February press conference, he refused to apologize.

“Apologize? Look, I have said repeatedly, we made a mistake in creating the void,” Cuomo told reporters, adding:

The void allowed misinformation and conspiracy, and now people are left with the thought of ‘Did my loved one have to die?’ And that is a brutal, brutal question to pose to a person. And I want everyone to know everything was done—everything was done—by the best minds in the best interest. And the last thing that we wanted to do, the last thing that I wanted to do, was to aggravate a terrible situation.

A Cuomo administration official defended the governor’s nursing home policy in a May interview with The Daily Signal. The official said that residents who returned to nursing homes after testing positive for the coronavirus were quarantined from other residents, following federal guidelines for them to be kept in separate facilities with different caretakers than the rest of the home’s population.

“It was one of the giant red herrings of all time,” the Cuomo administration official, who didn’t want his name used, told The Daily Signal in the interview. “I would take our state law over any state law that says you can discriminate [against] potentially the most feeble, at-risk, vulnerable people in our society.”

On Feb. 24, Comer and other committee Republicans first asked Maloney to subpoena Cuomo to testify and supply documents about nursing home deaths.

The letter noted that two New York Democrats on the oversight committee, Reps. Antonio Delgado and Alexandria Ocasio-Cortez, called for getting to the bottom of the Cuomo administration’s undercounting the death toll.

In the letter to Maloney, the committee Republicans wrote:

The governor has a documented track record of misleading the public about his lethal March 25 order, including orchestrating a cover-up to conceal the truth from the New York State Legislature, the U.S. Congress, and, possibly, the U.S. Department of Justice. The only way to bring the truth to light and inform future public health decisions is to conduct a full investigation of Gov. Cuomo’s actions.

Comer also signed onto a March 5 letter with other House Republicans asking four separate committees to consider an investigation into the COVID-19 deaths at New York nursing homes. The letter went to Maloney, as well as to the chairs of the Ways and Means Committee, the Energy and Commerce Committee, and Oversight’s select subcommittee on the coronavirus crisis.

The letter asked for interviews or depositions with six Cuomo administration officials, including Secretary to the Governor Melissa DeRosa, who told New York state lawmakers that the administration misled the Legislature on nursing home deaths because of a U.S. Justice Department investigation. DeRosa, Cuomo’s top aide, said the governor’s office feared the numbers would be “used against us by federal prosecutors.”

The GOP lawmakers also asked the Democratic leaders to subpoena records that show the “total number of COVID-19-related nursing home deaths” as well as information pertaining to communications between the governor’s office and the New York State Department of Health, among other documents.

“Congressional Republican leaders have made several hearing requests without response. Yet, despite the Democrat leaders’ abdication of their oversight responsibilities, more facts have emerged from Albany via the national press,” they say in the letter, later adding:

Given this timeline and publicly available information—which seems to confirm that a politically-driven data cover-up occurred—and the oversight authority entrusted to you as Democrat leaders of the relevant committees, it is unclear what more the majority needs to know in order to deploy all the tools at your disposal, including hearings and subpoenas, to determine if Gov. Cuomo’s administration deliberately provided false data to the federal government and the public.

The Daily Signal also sought comment Wednesday from Democratic staffs of the other committees, who did not immediately respond to questions about whether they would hold a hearing.

New York’s nursing home controversy began in March 2020, when the governor issued directives to send thousands of patients who tested positive for COVID-19 back into nursing homes across the state.

In July, according to news reports, Cuomo’s office rewrote a health department report to hide the actual data on nursing home deaths.

Six months later, in January, the state’s attorney general issued her report finding that the state had undercounted nursing home deaths by “approximately 50%” and that the governor’s mandates “[m]ay have contributed to increased risk of nursing home resident infection, and subsequent fatalities …”

The New York Post reported in February that DeRosa explained it this way to Democrat members of the state Legislature why the numbers were not accurately reported to lawmakers:

After the top Cuomo aide’s words became public, Comer and other Republicans on the Oversight and Reform Committee first asked Maloney to subpoena Cuomo to testify.