Biden’s Pursuit of Racial Balkanization Will Further Divide the Country

Here Are Some Books the Woke Left Would Replace Dr. Seuss With 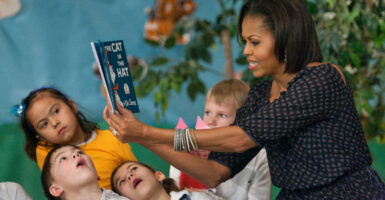 What a difference a decade makes. Children's books by Dr. Seuss have fallen out of favor on the left, but that wasn't always so. Then-first lady Michelle Obama is seen here reading the Dr. Seuss classic "The Cat in the Hat" to students at Oyster-Adams Bilingual School in Washington, D.C., 10 years ago on March 3, 2011. (Photo: Brooks Kraft LLC/Corbis/Getty Images)

As you likely have heard, the latest casualty of cancel culture is Dr. Seuss. And because nature abhors a vacuum, the woke left has a list of books as ready replacements it would prefer that children read instead.

The late children’s author Dr. Seuss, aka Theodor Seuss Geisel, has come under fire for drawing a few racially insensitive and anachronistic cartoons in his books in the mid-20th century.

His estate has already announced it’s removing six of his books from further publication, but it goes well beyond that. A Virginia school district announced it would no longer emphasize Dr. Seuss during its annual Read Across America Day, an event sponsored by the National Education Association teachers union, even though it takes place every year on Geisel’s birthday, March 2.

But here’s where it gets interesting: Left-wing activists aren’t just canceling Dr. Seuss. They’re also recommending woke books for children that are more about indoctrination than education or enjoyment.

Almost every title on the list are books about race, gender identity, and various other left-wing causes. It’s not just a few woke books included; they make up practically the entire list.

One such book is “Julian Is a Mermaid,” about a little boy who sees women dressed as mermaids and wants to dress just like them.

Another, following the gender-bending theme, is “The Prince and the Dressmaker,” about a prince who secretly wears dresses at night.

Then there is “Americanized: Rebel Without a Green Card,” about an illegal immigrant from Iran.

“We Are Here to Stay: Voices of Undocumented Young Adults” is also about illegal immigrants.

“This Is Our Constitution: Discover America with a Gold Star Father” is a book by the Gold Star father who spoke at the 2016 Democratic National Convention and criticized then-presidential candidate Donald Trump.

“Stamped: Racism, Antiracism, and You” is an adaptation from the introduction to a book by “anti-racist” activist Ibram X. Kendi.

There are other books recommended that aren’t inherently left-wing activism, but it’s undeniably the slant of the list.

The teachers union’s recommendations aside, the anti-Dr. Seuss movement is real.

The efforts to disappear the beloved author of children’s books didn’t just touch a single school district. President Joe Biden this week left Dr. Seuss out of his Read Across America message entirely, despite his having been mentioned in the annual messages from Biden’s predecessors, Trump and Barack Obama.

Obama even told a group of White House interns in 2015 that “pretty much all the stuff you need to know is in Dr. Seuss.” That same year, first lady Michelle Obama also had high praise for Dr. Seuss: “We love Dr. Seuss in this house.”

Oops, it looks like the Obamas were spreading racism, white supremacy, or something.

On issues of race, Dr. Seuss—a liberal and New Deal Democrat who preached tolerance—is hopelessly retrograde for the woke left. The new ethos requires a redefinition of racism, in which intent is meaningless and racial identity is the essential aspect of who you are. In the cultural revolution, Dr. Seuss has to go.

Many on the left and those in denial about the reality of our current culture war argue that Dr. Seuss isn’t really being canceled. It’s only his estate removing six “offensive” books and a shifting focus in education. What’s the big deal? And if your culture is racist, it deserves to be canceled anyway.

It’s true that, so far at least, not every work of Dr. Seuss has been scrubbed. His books are certainly a hot item on Amazon right now, though don’t count on the online retail giant to keep selling material that offends perpetually aggrieved woke activists.

If you’ve been paying any attention to what’s been happening in recent years, it’s likely that this is merely a prelude to Dr. Seuss being wiped entirely from public forums.

Universal Orlando announced it is “evaluating” its Dr. Seuss-themed attractions. Media outlets are running reports on the Dr. Seuss racial “reckoning” being a long time in coming.

Does this slide to oblivion for Dr. Seuss really have to be explained? We went from canceling Robert E. Lee to canceling Abraham Lincoln in just a few short years. Dr. Seuss doesn’t have long for this world.

Still, why are these woke activists deleting an endless array of once-beloved figures from our history?

As increasingly ludicrous as their crusade has become, there is a hidden agenda, which was described by freelance writer Sean Collins:

The woke warriors seek to tear up existing culture, root and branch, because they believe it is irredeemably racist. And Dr Seuss has, in fact, played an important role in our culture: His books are part of childhood and family life.

They bind generations together, as parents read to kids, who grow up to read to their kids. Dr. Seuss and his books thus have become a common reference within our culture, something we share warm feelings about with people close to us.

They certainly are that.

Dr. Seuss’ “The Cat in The Hat” was the first book I was able to read cover to cover as a child.

I’ve read a few books since that time, so I don’t need woke activists, professors, a teachers union, or the president to tell me what to think of Geisel’s work.

Nevertheless, that’s the point in disappearing Dr. Seuss and so many others. The goal is to reprogram the way people think, to strip young Americans of previously significant cultural and historical points of reference, and to reshape the American mind to embrace the revolution.

Tearing down Dr. Seuss, as activists have done with innumerable other figures in our history, is a way for woke activists to clean the slate of American civilization—effectively, to begin again at year zero.

That was the larger point I made in my 2019 book “The War on History: The Conspiracy to Rewrite America’s Past.”

The movement to tear down historical figures—both figuratively and literally—is not simple nihilism or idiocy, though there’s certainly a lot of both at work here. It’s also not a straightforward debate about the details of any particular historical figure’s legacy.

If anything, the humanity of the past is a problem for the woke in a world that has never conformed to their worldview.

The purge is, in fact, the point.