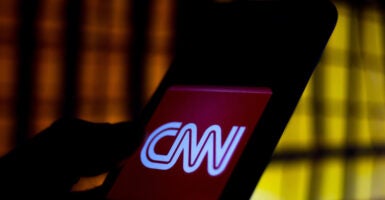 While criticizing other networks, CNN exudes arrogance about its own performance, never worrying that TV providers will question the quality of its information or its journalistic integrity. (Photo: Rafael Henrique/SOPA Images/ LightRocket/Getty Images)

Reps. Anna Eshoo and Jerry McNerney, both California Democrats, asked, “What moral or ethical principles (including those related to journalistic integrity, violence, medical information, and public health) do you apply in deciding which channels to carry or when to take adverse actions against a channel?”

CNN exudes arrogance about its own performance, never worrying that TV providers will question the quality of its information or its journalistic integrity.

One major provider is AT&T, which owns CNN. Another is Comcast, which owns NBC, CNBC, and MSNBC. So those providers dumping Fox or putting it in a more obscure channel tier would look like a crass commercial move, not some public-spirited stand.

The Times then sheepishly added an editor’s note saying that Ramirez “declined to be interviewed and friends say that she does not recall the incident.”

CNN spent only three minutes on the correction. Anchor John King disparaged Republicans for pointing at this correction as an attempt “to steer you away from the substance.”

We won’t even go into all the wild CNN talk of Trump being like Hitler or Stalin, or Stelter’s guest who said Trump would kill more people than Hitler, Stalin, and Mao combined.