Biased Media in the Woke Era 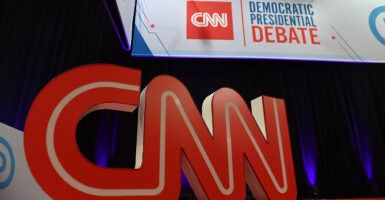 A CNN sign is viewed before the fourth Democratic primary debate of the 2020 presidential campaign season hosted by CNN and The New York Times at Otterbein University in Westerville, Ohio, Oct. 15, 2019. (Photo: Saul Loeb/AFP/ Getty Images)

“A pioneer devoted to equality.”

That was The Washington Post’s headline about Ruth Bader Ginsburg.

When the founder of ISIS was killed, the headline was: “Austere religious scholar at helm of Islamic State dies.”

But when President Donald Trump’s brother died, the headline was, “Younger brother of President Trump who filed lawsuit against niece dies.”

At news conferences, former Vice President Joe Biden gets softball questions. After an article in The Atlantic claimed Trump called fallen military members “losers,” one reporter asked Biden, “What does it tell you about President Trump’s soul?”

“It’s not even softball!” complains The Hill’s media reporter, Joe Concha. “It’s T-ball, except when you put a beach ball on the tee!”

Trump does get nastier questions.

What we used to call “mainstream media” is now “woke” media. Many don’t even try to be objective. That’s the topic of my new video this week.

Watching CNN during this summer’s protests, I noticed that reporters kept calling protests “mostly peaceful,” even when reporting violence. CNN posted the words “mostly peaceful protests” on the screen when flaming cars were on the street behind its reporter.

CNN defended itself, citing a study that said “93% of protests were … peaceful.”

But that’s silly. When planes crash, we don’t put “99% landed safely” on the screen. As Concha puts it, “When people start dying and losing their businesses, that’s your story!”

I push back: “Most people who work there consider themselves journalists. They try to get it right.”

“I don’t know if I agree with that, John,” Concha replies. “More and more are playing to a crowd.”

CNN once tried to look like a neutral news network. No more. Now it does whatever it can to scare people or make Trump look bad.

In March, CNN sneered at the president for misleading people by claiming the U.S. did more COVID-19 tests than any other country. It, correctly, pointed out that per capita, “South Korea and Italy tested many times more.”

It scolded the president, saying, “The U.S. had more coronavirus cases than any country in the world!”

CNN sneers at Trump all day.

I asked its spokesperson if CNN considers its reporting objective. No response.

During the Democratic National Convention, CNN didn’t bother fact-checking Democrats’ speeches. But during Trump’s speech at the Republican Convention, CNN suddenly put up a black ticker tape “fact-check” across the screen.

Why not fact-check the Democratic National Convention, too? “There’s a reason we didn’t fact-check Democrats!” said CNN’s Chris Cuomo. “They are not lying the way Trump does.”

But they lie, too.

Democrats were deceitful enough that The Associated Press and BBC found a need to fact-check.

For example, former first lady Michelle Obama complained that under Trump, “children are torn from their families and thrown into cages!” But that border control policy began under her husband’s administration.

CNN’s Van Jones admits that CNN overtly favors Biden, saying after Biden’s acceptance speech, “As long as he didn’t embarrass himself, we were going to come out here and praise it.”

“Maybe CNN’s just being honest,” I say to Concha. When I was at ABC, everyone pretended to be apolitical (but nearly all were on the left).

It’s clear that most reporters don’t like Trump—or even Republicans. Last election, 96% of journalists’ political donations went to Hillary Clinton.

“Our national media are in two cities, New York and Washington,” says Concha. “When you’re surrounded by everybody else in a city and newsroom that goes the other way, it’s almost impossible not to start to conform.”