The Future of ISIS After the Death of Baghdadi 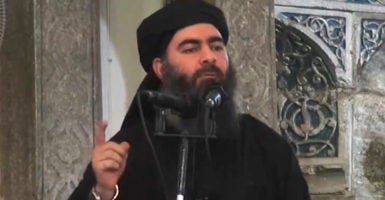 The leader of the Islamic State, or ISIS, is dead. The man who directed so many brutal killings, tortures, and atrocities took his own life in a tunnel after being hunted down by U.S. forces. What does that mean for the fight against ISIS, both in Syria and abroad? Today we discuss that with Jim Phillips, a Middle East expert at The Heritage Foundation. Plus: Kanye West’s full embrace of the Christian faith is doing pop culture a new one. We discuss his latest album and film.

The Daily Signal podcast is available on Ricochet, iTunes, Pippa, Google Play, or Stitcher. All of our podcasts can be found at DailySignal.com/podcasts. If you like what you hear, please leave a review. You also can leave us a message at 202-608-6205 or write us at [email protected]. Enjoy the show!

Jim Phillips: Sure, thank you.

Davis: So the head of ISIS is now deceased. President [Donald] Trump announced over the weekend Abu Bakr al-Baghdadi is dead, actually, [he] killed himself as he was about to be captured by U.S. forces in Syria. Jim, how big a deal is this in the fight against ISIS?

Phillips: This is a major victory for the Trump administration’s war against ISIS, and it’s a huge defeat for ISIS. It’s not likely to be decisive in the sense of spelling the end of the organization, but I think it is the beginning of the end.

Although Baghdadi may be replaced as the top leader, it’s unlikely that any successor will have the same degree of effectiveness that he had, and that successor is going to be much more concerned with his own personal security than in launching attacks on the West.

So this was a very good day for the U.S.

Davis: And it sounded like a pretty elaborate intelligence operation, kind of reminiscent of the [Osama] bin Laden raid in Pakistan.

Phillips: Yeah. I think there were similarities in the sense that it was piecing together multiple pieces of a jigsaw puzzle over time, and it’s unclear, at least to me, exactly which of the pieces was the final piece that sealed his fate.

But it does appear that at least some of the leads came from Iraqis that were interviewed by Iraqi intelligence, and the information was passed on to the U.S., which acted on it in Syria.

Rachel del Guidice: Something really quickly that I thought was particularly sad, when President Trump was talking about what happened on Sunday he had mentioned that 11 children were rescued from the compound, but that Baghdadi brought three of his own kids, and ended up detonating his vest, killing himself and his three kids.

I haven’t seen a lot talked about this in the media. It seems to be that terrorists tend to use children as human shields. Should we be talking about this more?

Phillips: I think it’s something that’s very common among al-Qaeda and ISIS leaders that know they could be targeted by airstrikes. They also know that the U.S. tends to put off airstrikes if there’s excessive numbers of children there, although at least some of these were their own children, that is one of the tactics that they use to avoid being targeted once they’re found.

Davis: Baghdadi really had positioned himself as this kind of God-ordained leader of ISIS, right? I mean, saying he was descended from Muhammad and so forth. And it seemed his followers believed that. I mean, they were following him.

Phillips: I think ISIS has shown itself to be a hydra-headed organization in the past in the sense [that] if you cut off one head another will emerge. But it’s going to be difficult to replace a head that is as important as Baghdadi’s, because he was one of the co-founders of ISIS and was in from the beginning, and a lot of the very extensive webs that ISIS weaved led to him. It’s going to be difficult for any one leader to get in the center of that web again.

Psychologically, this is a huge blow, and to the extent that some of his followers may have subscribed to some of his religious propaganda about being favored by God, then this latest news that he lost God’s favor in a very big way is bound to be extremely demoralizing.

Davis: Is that how they would interpret it? Some terrorists would say they go straight into heaven if they die as a martyr. Would they interpret this as loss of God’s favor on him?

Phillips: I think there are many different motivations that bring people to an organization like ISIS. Much of them are desire for power, or for money, for taking part in sex slavery, but there was a small, I would say, proportion of people that were attracted out of religious zealotry. And those are the ones I think that will see his humiliating demise as a sign that he did not have the favor of Allah as he claimed.

del Guidice: President Trump, during his speech on Sunday, said he wanted Baghdadi’s death to be an example to other people thinking about joining ISIS, and Trump said that Baghdadi died whimpering, crying, and screaming. Do you think that will discourage fighters from joining ISIS?

Phillips: I doubt there’s too much that the president could say that would actively discourage them. In fact, he should be careful what he says because it may rebound and trigger them to sign up.

I think what he was aiming for is to take away the aura of honor that Baghdadi may have had in certain circles that see killing Americans, and other things, to be honorable activities because of the way he died. Although the fact that he committed a suicide in some respects would be more encouraging to his followers, because it showed that he had control at the end rather than losing total control and just being picked off by American soldiers.

I think the president was trying to depress the reputation of Baghdadi, but I’m not sure that his words will accomplish that in the Middle East.

Davis: The Washington Post got a lot of blowback over the weekend when it ran a headline on the obituary referring to Baghdadi as an “austere religious scholar.” Today, the headline reads “extremist leader,” so clearly they changed that.

Why do you think the Post would characterize him as an austere religious scholar?

Phillips: That is so far off base when you look at the totality of what this man did and the size of his crimes. Yes, he was trained as a religious scholar, but to lead with that description is just beyond belief to me. I’m not sure why they would pick that as even the title of an obituary. It’s just crazy.

del Guidice: ISIS has already tapped a new leader. His name is Abdullah Qardash. What do we know about him?

Phillips: He’s believed to be a very close aide to Baghdadi. He formerly was trained like Baghdadi was as an Islamic specialist. There’s very little known about him, or what he’s likely to do, but hopefully he won’t be around too long if they’re able to exploit a lot of the information that they’ve uncovered in this raid. They’ve already struck at one of Baghdadi’s other aides and killed him, so we’ll see what other leads are developed.

Davis: Zooming out a bit, looking at ISIS as a whole, what’s the direction of ISIS right now? Is it possible that in light of the U.S. withdrawing from Syria that ISIS could make a comeback, or does it look like this is a decisive blow [and] ISIS is on the way out?

Phillips: This is a huge blow, but it’s not clear that it’s totally determinative yet. ISIS made a big, bloody comeback in Iraq after the U.S. withdrew [in] 2011, and reached its peak in 2015.

So it’s possible that ISIS could make a comeback in Syria. But it’s not as likely, given that even if the U.S. totally pulls out, which it isn’t right now, it’s still maintaining hundreds of soldiers in Eastern Syria.

But even if the U.S. did totally pull out, the Syrian regime, Iran, Russia, and Hezbollah all are opposed to ISIS and would resist it from arising to the heights that it had risen to before.

But with that said, it’s important to remember that ISIS has 14 different franchises. And although it’s on the defensive, and on the verge of defeat in Iraq and Syria, it still is expanding elsewhere in Asia, in Africa, Libya, Yemen, Somalia, the Philippines, so we haven’t heard the end of ISIS.

Davis: All right, well, Jim Phillips, we appreciate your time today. Thank you.